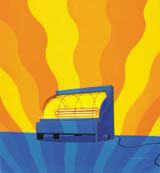 With its tracing paper heritage and traditional lack of flexibility, both from a printing and folding point of view, translucent paper is a material that’s largely been left to languish among the fold – as a leaf between two pages or a subtle cover for high-end reports.

But developments in paper manufacturing and printing techniques mean designers can now choose to use this diaphanous material across far broader applications.

James McNaughton group marketing director Tony Porter says demand is growing for translucent products. He believes designers have become more adventurous in how they use the paper and manufacturers are responding by delivering a wider choice of stock.

Robert Horne national design support manager Shannon Gallet agrees. ‘Translucent papers today offer far greater flexibility [than in the past] and we’re seeing designers moving away from just using it as inserts,’ she explains. ‘Today they’re designing around the paper and getting more creative with it.’

There is an important recent improvement to translucent paper: it is more foldable than ever before. In the past, folding a translucent stock often led to cracking or a white line along the fold. Today, papers like the Arjo Wiggins Flexi Clear range distributed by Robert Horne have a tactile finish, and they’re designed not to crack when folded.

As a result, both Gallet and Porter say they’re seeing increased demand for translucent envelopes. Blast Design, for example, chose a transparent envelope in multiple colours for a self-promotional mailing. ‘We wanted the message to shine through and entice people to open the piece,’ explains Blast Design creative director Colin Gifford.

James McNaughton’s Spectral range is available in 18 colours, including iridescent shades and Robert Horne stocks Curious Translucents, which are available in 19 colours and a range of patterns.

Porter points out that this development means designers can now incorporate the material more creatively, matching brand palettes or using it as a contrast to other materials.

The patient’s story was handwritten in the form of doctor’s notes and printed on Spectral Frost, a translucent shade that matched the client’s corporate palette. This was then overlayed on the same patient’s real life X-ray.

‘Using [translucent stock] enhanced the connection between the notes and the X-ray and helped bring the technical medical terminology to life,’ says Fletcher.

Printers are also becoming more comfortable with translucent products. ‘Printers are generally being asked to print on a broader variety of materials and are more confident working with translucents today than in the past. That’s partly due to technological developments such as more sophisticated printing machinery and it’s also due to more sophisticated inks,’ explains Porter.

In the past, the paper’s lack of absorbency posed problems, but developments like quick drying oxidising inks now mean a range of print techniques can be applied. Four-colour applications are common and designers can also use special printing effects.

Glow Associates created a Christmas poster for its clients last year that used silkscreen rather than standard litho print on a coloured Spectral translucent stock.

‘The idea was to update the Yuletide log with a five-bar heater and we wanted the poster to convey warmth and play on [the group’s] name,’ explains Glow Associates director James George.

‘We chose to print on both sides of the stock and its iridescent and translucent properties helped build up a 3D effect and lifted the image off the paper,’ he adds.

Designers, it seems, are seeing through transparent paper’s limited past to the potential for creativity that it offers today.