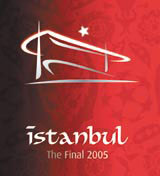 The consultancy has a long-standing relationship with the football organisation and was appointed to the project last year, after an eight-way pitch.

It is tasked with developing an identity and a solution-based strategy for the event and is creating a series of artwork templates and watermarks, which will allow for more flexible use by sponsors, explains Dan O’Toole, brand manager at Uefa.

The brand will comprise an identity, graphic icons, varying formats such as three-dimensional perspectives and a palette featuring ten default colours with five light and dark shades. It will launch next month.

The visual image is inspired by materials found in a mosque and seeks to tap into the Istanbul way of life, says a spokesman for English & Pockett.

Traditional ethnic designs have been combined with the colour red from the Turkish flag to create a contemporary graphic background. The identity also includes elements of the Champions League ‘starball’ logo and an image of the trophy itself. E&P designer Alan Lo has led the project.

The identity will be used across a broad range of promotional and merchandising materials such as 48-sheet posters, match tickets, telescopics, banners and packaging. It will also brand match materials such as tickets, programmes and dressing for the stadium.

Keeping the TfL brand on track

Camel to spark up brand with global design projects