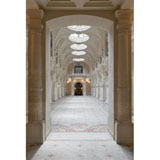 Following a major revamp, the Musée des Arts Décoratifs, in Paris, has finally reopened. With a fresh emphasis on its architecture, new, modern interiors and rich exhibits dating from the 17th century to the present day, the directors hope to have contemporary designers flocking to its doors, says Natasha Edwards

After nine years of work, and €35m (£24m), Paris’s Musée des Arts Décoratifs has reopened in splendour, bringing the building back to safety norms and showing off a collection that – although in a wing of the Louvre – is very different from the largely royal provenance of the Louvre itself. Here the vast majority of items come from donations by collectors and there’s a strong emphasis on the 19th and 20th centuries.

Four design teams have been involved in the renovation: Bruno Moinard (4BI) and Spanish architect Olivier Tusquets (TD&A) for the entrance hall and historic galleries from the 17th century to Art Deco; Sylvain Dubuisson, with museography by Françoise Guichon, for the contemporary rooms since 1940; Bernard Desmoulin for the thematic study galleries, toy collection and Dubuffet gallery; and Daniel Kahane for the central nave.

The building has rediscovered its architecture. False floors and partitions from decades of intervention have been taken out to open up the imposing central Great Nave, restoring its mosaic floor and natural daylight through seven circular skylights and by closing up the side bays with thick glass panels bolted on to the stone. In addition to light, supplemented by discreet spotlights and fibre optics by consultant Hervé Descottes, side windows restore the sense of orientation, with glimpses of the Tuileries Gardens on one side and the Rue de Rivoli on the other.

For the study galleries, which take a cross-period, thematic approach, Desmoulin has chosen a strong presence, centred on three display case modules (a wall module for comparative collections, where you find, for example, Haviland porcelain designed by François Bauchet in 2001 alongside 18th-century Chantilly porcelain and a 1960s pink plastic toy dinner service); a cloche for exceptional items and a long, free-standing module for series; and an ‘aesthetic of change’ for a display that will be changed annually. 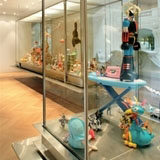 ‘We decided to make the vitrines quite flexible, so you can have access to the objects,’ says Desmoulin. Big, solid display cases match the scale and solidity of the building and contrast with the objects. ‘The thicker the structure, the more the object stands out. It’s not a museum of fine art or jewellery, but of useful objects. For me, it’s the applied arts, and that presuppposes a technological aesthetic,’ says Desmoulin, who has gone for an industrial look with visible hinges, tension cables, bolts and big sprung wheels. ‘A priori stainless steel is cold. The more we play on the cold, the more the objects within appear warm. It creates a form of distance. In addition, it is a material one barely finds among the museum’s collections,’ he says. On the third floor, larger items are displayed on thick, floating platforms – you’ll find Napoleon’s throne opposite Gaetano Pesce’s Feltri armchair.

Similar showcases were devised for the toy galleries, but here the heavy case is detached from the walls and hung from the ceiling, ‘like a flying carpet or a child’s bedroom full of toys that he hasn’t arranged’. Desmoulin admits that some of the curators had doubts about the forceful presence of his showcases. ‘They weren’t very happy at first, but when they began to put the objects inside, Béatrice Salmon [the museum director] telephoned me to say that they worked very very well.’

In contrast, for the chronological galleries, which trace the development of styles, tastes and techniques, Moinard and Tusquets have taken a more discreet approach. Exposed stone and original parquet give a sense of the 19th-century origins of the building. Many large pieces of furniture are placed directly on the parquet. Others are posed on thin, dark-coloured bronze podia — Moinard is known for a pared-back and luxurious style. A grid of open bronze shelving is used for a wall of 18th-century marquetry desks. Display cases, mainly used for ceramics, glass or silverwares, in clear glass and slim, dark bronze-tinted metal are integrated with the architecture.

The galleries are interspersed by ten period rooms (reconstituted by decorator François-Josep Graf), most of them, such as Jeanne Lanvin’s Art Deco suite by Armand-Albert Rateau, inserted into the architectural structure. Others, such as the panelled salon of the 18th-century Hôtel de Rothsgude in Avignon, are presented in a bronze wire crate on the bridge overlooking the nave. Moinard says that if you look into this period room, it is ‘like a glimpse of a time capsule, as opposed to the other rooms that take a more contemporary perspective.’

Contemporary design is spectacularly housed in the Pavillon de Marsan. Dubuisson removed old floors, revealing the metal roof structure and opening an atrium between the seventh and ninth floors for a display that starts with the 1940s in the top of the roof and descends to the 2000s on the fifth floor. 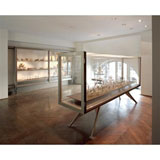 Dubuisson paid particular attention to floor surfaces. Amid stretches of old parquet and traces of former walls, items are displayed on surfaces ranging from dark wood or brown carpet to grey pebbles, for the section devoted to Noguchi and the Japanese period of Charlotte Perriand, and a three-tier, freeform, white island of chairs from the 1960s and 1970s. Designers of the 1980s and 1990s, including Martin Szekeley, François Bauchet, Garouste et Bonetti, Jasper Morrison, Marc Newson and Dubuisson himself, are displayed in open-sided white containers, while most recent trends are shown on a mosaic of Tarkett carpet tiles.

Salmon is keen that the museum should remain in touch with contemporary designers. In addition to big exhibitions in the Great Nave (starting with Editer le Design, 25 October 2006 to 21 January 2007, and a retrospective of Joe Colombo, 27 April to 12 August 2007), a gallery in the Pavillon de Marsan is reserved for contemporary design, with Martine Bedin programmed for February.