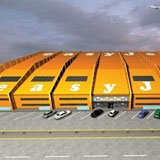 Work starts on site at EasyJet’s new corporate headquarters at Luton Airport this week, with interiors designed by Area Sq, in what is a £3.1m refurbishment project for the group.

The consultancy was appointed in January, following a three-way pitch against undisclosed groups in December last year. The interiors are expected to be complete by the end of the year.

The budget airline is relocating to Hangar 89, which is adjacent to the terminal and control tower at the airport and is one of the largest cantilever structures of its type in the UK. In addition to the 4645m2 headquarters – comprising primarily office space, along with meeting rooms and a staff canteen – the hangar will also house up to three Boeing 737s at any one time.

According to Area Sq project director Oliver Hammond, the consultancy was briefed to convert the enormous 1970s hangar into an environment that reflects the culture and ethos of the company.

‘EasyJet is a low-cost airline and the fit-out, style and design solutions needed to take that into account,’ he explains.

The group has created two additional mezzanine floors in the space and selected simple, low cost solutions and materials, says Hammond. ‘There’s some glass around, but, rather than high quality materials, we’ve opted for the bulk standard and are using colour and graphics to set off the design and brighten things up,’ he says.

There are no floating ceilings in the space and to improve aesthetics the second-floor mezzanine will feature an image of a superimposed aircraft fuselage. Windows that look down on to the first floor are ‘portholes in the style of an airline window’.

One of the key requirements was to reflect EasyJet’s ‘strong corporate identity,’ says Hammond. ‘It’s one of the strongest brands in Europe and we wanted to reflect that. There’s plenty of orange [in the scheme], which helps to create quite a young, vibrant and fun environment,’ he says.

The outside of the building is also being re-clad and redecorated in the brand’s signature orange. ‘It’s going to one of those buildings you can see from space,’ says Hammond.

A challenge is to create a balanced, calm interior in the massive open-plan areas – the space will not have any cellular offices.

‘Because of the scale of the building, we decided on a herringbone layout for desks, rather than the more traditional

design of perpendicular to the side walls, to give a more interesting feel to the space,’ explains Hammond. ‘Otherwise, it looks like nothing except a sheer quantity of desks.’

• The Pantone 021 orange of the Easy brand has been applied to 15 other businesses, from a cruise line to a pizza-delivery company

• Still controlled by founder Stelios Haji-Ioannou, whose family holds a 40 per cent stake and recently saw off a takeover bid from Icelandair

• Tenth anniversary last year, when it carried almost 40 million passengers, up 14.5 per cent on the previous year