For a new stage show, event producer and designer Stig Edgren is looking to faithfully recreate the Abbey Road Studio, which was the scene of the recording of many Beatles albums.

Hosted within the Royal Albert Hall for the show – which starts in April 2016 – a translucent cube of light will contain live performances by musicians and singers who will play the music of records including A Hard Day’s Night, Seargent Pepper’s Lonely Heart Club Band, and the White Album.

Edgren has consulted with chief engineer of Abbey Road Studios Geoff Emerick, so he can use authentic equipment, recreate the look of Studio Two and even have his musicians stand in exactly the same place the Beatles would have done.

“One day I thought wouldn’t it be amazing if the audience could be a fly on the wall for the Beatles’ recording sessions through the eras,” says Edgren, who has designed the space so that it will have exactly the same footprint and dimensions as the studio.

The cube shape will be formed from translucent scrims, which drop down from giant rollers. “Throughout the show light projection and video mapping techniques will be used,” according to Edgren, who says typographic information about albums will run across the top of the display and some overlayed imagery.

“We don’t want too much imagery though like the early days of Liverpool or contextual news footage as this isn’t a documentary,” Edgren says.

He is also driven by the idea that the show is “something completely different” and “not a load of guys in wigs on stage.”

To this end the audience will not see the faces of the performers until a reveal at the end. Instead the music, the recording process and the interplay between takes are given precedence.

The chronological approach to each record will be signposted with different types of lighting. “We’ll use black and white in the early years, full out of control colour for Seargent Pepper’s and eliminate colour for the White Album when they stripped things back,” says Edgren. 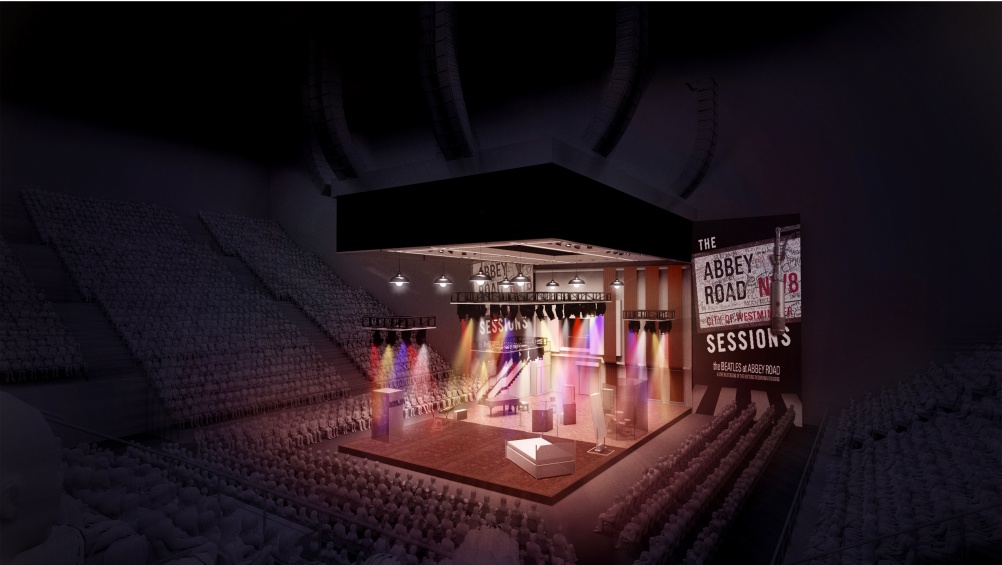 Some light will permeate the cube and allow precise shadows to be cast over musicians so that their faces will remain in shadow even as they move round the stage and as sets are recomposed for different albums.

“From a design sense it will be like a technical ballet. Everything will be choreographed so you won’t be distracted by faces – the performers and the equipment will move seamlessly.”

Edgren’s consultancy SEG Events is working alongside another Event design consultancy, Stufish to deliver the design.

Edgren has produced major sporting event ceremonies, papal tours as well as Presidential ceremonies for the likes of Nelson Mandela and Bill Clinton.

While these have been designed and produced on a grand scale, The Abbey Road Sessions will use design in a subtle but direct way.

This is partly out of necessity though. “The show isn’t endorsed, we can’t use any Beatles imagery or trademarks. Of course we have the music but we’re going to have to be really careful about how it comes together,” he says.

By filming the hands and mouths of musicians as they’re playing and projecting the images back onto the cube Edgren will “help the audience focus and draw on their emotional attachment and personal memories of these songs,” he says.