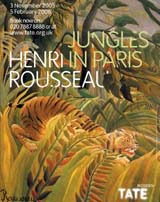 Rose has designed the exhibition graphics, marketing and advertising campaigns and catalogue for Henri Rousseau/ Jungle in Paris, the Tate Modern’s major winter exhibition, which opens next week.

The work uses details from two of Rousseau’s most popular works and intertwines typography with the foliage in the paintings, ’emphasising the camouflaged aspect of Rousseau’s work’, says Rose creative director Simon Elliott.

‘Combining the contemporary Tate font and a classical painting is not necessarily the best marriage. We’ve tried to bridge the gap by wrapping the text in the jungle,’ he explains.

The exhibition, which features 50 works and is the first exhibition of Rousseau’s works in Britain in 80 years, runs from 3 November to 5 February 2006.