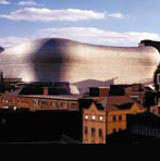 Encompassing more than 130 stores and retail space equivalent to 26 football pitches, the £500m revamped Bullring shopping complex in Birmingham finally opens to the public on 4 September.

The complex has kept a host of designers busy over the past year, with many retailers using the opportunity to test-bed new concepts. Anchor tenant Debenhams claims it is using the Bullring to take its brand to a new level, unveiling its first ’20/Ten’ concept store.

Debenhams head of visual and creative Mark Woods describes the area as ‘a customer-focused approach to our new proposition [that is] based on service, environment and product’.

Woods says much of the interior design is the work of the in-house team, but follows concepts set down by design consultancies Conran Design Group, Creative Action Design and Carte Blanche.

Meanwhile, Creative Action has designed the fixtures system – as well as a concession for luggage brand Tripp – and Carte Blanche has evolved the cosmetics hall.

Carte Blanche associate design director Caroline Dibble says the brief was to ‘bring Debenhams’ personality into the space’ by reorganising where beauty brands, wellbeing zones and treatment rooms are situated. It also involved creating a ‘marketplace area [for Debenhams] in the middle’ (concept layout pictured above).

The template is expected to roll-out in other locations, with the MetroCentre in Gateshead and Foyleside in Ireland already earmarked.

Superdrug is another retailer piloting ideas at the Bullring. The brand team at 3, which its parent Hutchison Whampoa also owns, is working with Astound on a concept store that will sell Superdrug wares and the mobile phones.

Elsewhere, Fitch London has designed the flagship store for UK fashion retailer USC, which is aiming to soften its masculine image in order to appeal to women, while Din Associates is working with French Connection and Brinkworth has designed the Bullring’s Karen Millen outlet.

‘Our aim is to inspire,’ says Selfridges marketing director James Bidwell. ‘The Selfridges experience will begin long before you walk through the door.’

Four groups contributed to Selfridges’ interiors, in addition to the Future Systems-designed Level One, which comprises the food hall, contemporary furniture, kids, luggage and home/essentials zones.

Eldridge Smerin has created the ‘spirit’, books and technology floor. Stanton Williams has designed the beauty, jewellery and menswear offers, while Cibic and Partners and Lees Associates have collaborated on womenswear, intimate apparel and accessories. Cibic and Partners, an Italian group, has also designed the Gallery restaurant.

‘The idea is to have no distinction between walls, roof or windows – to look like an outdoor space,’ says director Aldo Cibic.

Other design work at the Bullring

Pentagram, under partner David Hillman, has been responsible for the signage and wayfinding system (DW 10 October 2002).