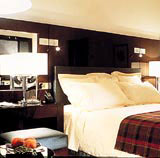 Widespread predictions of economic doom and gloom have heralded the end for some of the capital’s high-profile restaurants and bars. This year began with the closure of Marco Pierre White’s Oak Room and Titanic, and Richard Neat’s eaterie in the Oxo Tower has closed after only seven months of trading. So how has the rest of the hospitality industry fared? The predicted downturn in US travel following 11 September 2001 has led to a drop for big chain hotels in both occupancy and revenue per room, which, according to independent consultancy TRI Hospitality, declined by around 22 per cent by the end of last year.

It may come as a surprise, then, to learn that rather than slowing down, the hotels sector is expanding. According to Peter Tyrie, director of the Eton Town House group, reports that at its lowest slump in the last recession London hotels still managed to achieve an average occupancy of 62 per cent, is a reason to still be cheerful. Identified as a cyclical market, it is estimated that hotel room rates and occupancy peaks every seven to ten years, followed by a downturn and a history of quick recovery. Since the last peak was identified in 2000, according to many hoteliers, now is the time to concentrate on growth.

Eschewing trends for longevity, the key to the new contenders is achieving staying power rather than finding the latest ‘look’. Although the new hotels have undeniably looked to trendsetting boutiques by the likes of Ian Schrager and Anoushka Hempel, their extremes have been tempered with a more commercial edge that aims to appeal across the board.