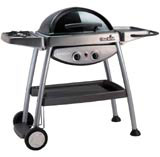 US barbecue manufacturer Char-Broil International launched a range of gas-fired barbecues, designed by Smallfry, in the UK and across Europe last week.

Smallfry, which created two models for the range, was asked to design a barbecue that appealed specifically to the European market. The consultancy developed the shape and form and product design specifications from concept through to manufacturing and conducted strategic planning and pan-European market research.

Char-Broil is keen to convert Europeans to gas-fired barbecues, according to Smallfry managing director Steve May-Russell.

‘Europeans have quite a different approach to barbecuing from their counterparts in the US. Their taste in product style and design is often at odds with American preferences. There is obviously also variation across Europe, but, having convinced Char-Broil it needed to offer different products to build its brand over here, we aimed to design barbecues that had pan-European appeal,’ says MayRussell.

‘The way it looks is completely different from other gas barbecues. It’s a lot stronger, it has plenty of storage space, a good cooking area and a unique aesthetic,’ he adds.

The consultancy won the work via a credentials presentation involving ‘at least four consultancies’ following a recommendation to the client.