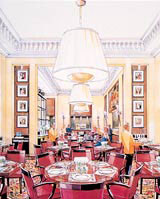 The prestige arm of the powerful international leisure and travel group Accor, the Sofitel chain aims to combine a boutique sensibility with the assurance of a brand. Despite talk of global economic recession, the group is expanding aggressively – this year alone sees the opening of 12 other Sofitels – from Bangkok to Buenos Aires, Cancun to Chicago and Marrakesh to MontrÃ©al.

This latest hotel for the group, which Sofitel bills as its European flagship, claims to marry French elegance with British tradition, and has called on the services of Paris-based designer Pierre-Yves Rochon, who has worked for the chain on hotels in Paris, New York and Tokyo.

Elements of the neo-classical Grade ll listed building’s past (it was formerly the headquarters of bank Cox and Kings) have been retained and the public areas are grand and formal. For the lobby area, Rochon has designed a 2m-tall glass and chrome clock – intended as a witty, modern take on Big Ben – which hangs opposite the original Cox and Kings coat of arms. One real challenge lay in working around the thick walls in the basement, originally used for safe vaults. ‘We’ve probably got the most protected toilet rolls in the world,’ jokes sales director David Taylor.

Of the 186 rooms there are 13 junior suites, six suites and one Royal suite, which features a plasma screen TV and a bespoke wood-and-chrome four-poster bed. With a rate of around £350 000 per room, the group is targeting the top end of the market, aiming for the 35to 50-year-old senior executive working in the finance sector. As well as providing Internet access and the latest digital telephone services in every bedroom, there is a high-tech boardroom with its own private dining room and banquet facilities to accommodate up to 200 guests.

As for glamour, French fashion designer Jean-Charles de Castelbajac has been enlisted to create the staff uniforms, for which he has re-interpreted of the traditional charcoal grey pinstripe suit: jacket buttons are replaced with a zip and the receptionists will wear asymmetric dresses.

High-profile chef Albert Roux is behind the ‘new classic French cuisine’ at Brasserie Roux, and the St James Bar boasts the most extensive range of non-vintage and vintage champagnes in London, served in the atmosphere of a gentlemen’s club. A more feminine ambiance prevails in the Rose Lounge, a pink and cream room with displays of fresh roses and the sound of a harp. Used to serve traditional English afternoon tea or Continental breakfast, it also houses the hotel’s library of books on French and English culture, the attractions of London and the history of the English rose.