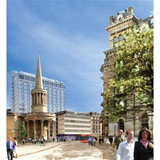 Designers look set to benefit from the long mooted regeneration of London’s West End as the organisation driving the project presents its short term plans for council approval later this year.

The New West End Company’s action plan calls for public realm improvement, including the upgrade and improvement of street furniture, signage and wayfinding and lighting. Plans should go into public consultation early next year, with calls for designers expected shortly afterwards.

According to a New West End Company spokesman, the organisation is currently working on the joint action plan with Transport for London and Westminster Council. Urban design group Gillespies is putting together a proposal that will outline its ‘short term’ goals, he says.

‘Ken Livingstone and the Greater London Authority are working on medium term plans, including the possibility of replacing buses with trams,’ says the spokesman. ‘But in the next few years there are things we should do to improve the public realm.’

The organisation defines the West End as the area bounded by Bond Street, Oxford Street and Regent Street. Its action plan calls for improvements in visual consistency across lighting and signage using ‘the best contemporary design to reflect the character and individuality of the three streets’, improving street art, creating oases of quiet and calm with seating and greenery and delivering more effective entrance zones.

Last week the Mayor of London stated his intention to replace the hordes of buses that use the street with an electric tram service and improve conditions for pedestrians by 2012 or 2013.