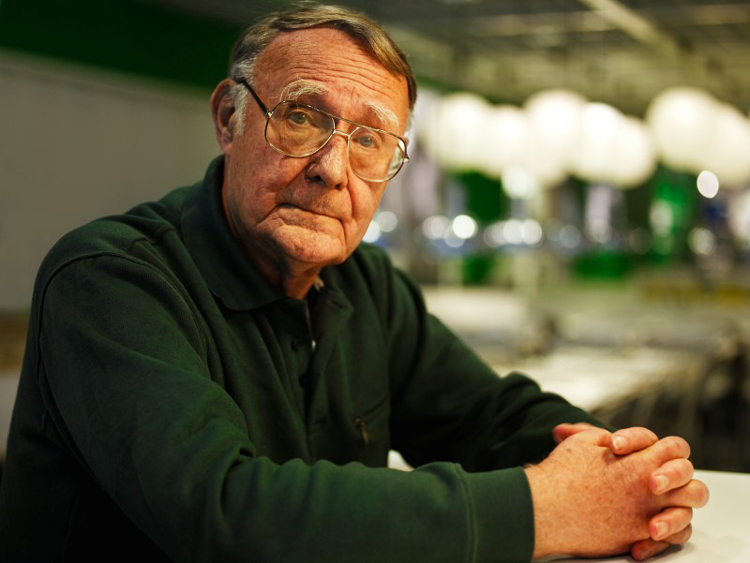 Ingvar Kamprad, founder at flat-pack giant Ikea, died this weekend aged 91, and leaves behind him one of the most practical and successful furniture businesses of all time.

Kamprad was born in Småland, Sweden in 1926, and founded Ikea in 1943 at the age of 17. The name Ikea is an acronym that derives from the entrepreneur’s initials (IK) combined with initials taken from places in the Swedish countryside in which he grew up (Elmtaryd, his family farm, and Agunnaryd, a nearby village).

Opened in UK over 40 years after launch

Ikea began selling furniture in 1948. The publication of its first catalogue followed in 1951, and its first store opening in Sweden in 1958. Ikea did not land in the UK until 1987, when the first British store opened in Warrington.

Kamprad ran Ikea for four decades until 1988, and many of Ikea’s most seminal pieces of furniture were launched under his tenure. He also set up the Inter Ikea Group, a parent company for Ikea which trademarks its products and brand, protecting it from copycat designs.

He held a role at Inter Ikea Group until 2013, when he stepped down and his youngest son Mathias Kamprad took over as chairman.

“He lived a modest life”

A spokesperson at Ikea describes Kamprad as a “a great entrepreneur”, “hardworking and stubborn”, with “a lot of warmth and a playful twinkle in his eye”, adding that “he worked until the very end of his life”.

Sebastian Conran, product designer and founder at Sebastian Conran Associates, says of Kamprad: “He lived a modest life and therefore had empathy with his customers. He understood the manufacturing-to-retailing chain meticulously well and had great vision into customers’ needs and wants.

“He also ruthlessly used the principals of economy of scale, which enabled him to negotiate directly with his suppliers and manufacturers, never hampering himself with his own factories.

“Ikea is a company that carefully surfs the trends rather than sets or trails them,” he adds. “But its production engineering is very innovative and it has led the field of flat-pack furniture, reducing shipping costs that the customer has to pay for.”

Adam Clarke, founder at social enterprise and furniture making group New Boosbeck adds: “Ikea has changed the way we buy furniture – and the way we live – forever – long may it continue.”

Controversy over connections with far-right groups

Kamprad’s legacy is not without controversy, however – the Ikea founder faced scrutiny in 2011 for allegedly previously holding ties with far-right fascist groups including youth Nazi organisations, according to The Guardian.

The claims dated back to the 1940s when Kamprad was in his teens and twenties. A spokesperson for Kamprad told the Associated Press in 2011 that “there are no Nazi-sympathising thoughts in [Kamprad’s] head whatsoever”, and that Kamprad’s previous tie with Nazi groups was the “biggest mistake of his life”.

Kamprad died at his home on 27 January 2018 in Småland, Sweden, following a short illness. Here are some of Ikea’s most pivotal designs, launched under his time in charge.

The Lövet Table was Ikea’s first ever piece of flat-pack furniture – originally created as a fully- formed table, Ikea’s first foray into flat-pack was born when an employee had to remove the table’s legs in order to squeeze it into the back of a car without damaging it. This humble table spearheaded the simple, self-assembly concept that Ikea is best known for today. To commemorate the table’s impact on the furniture industry, Ikea brought it back over 50 years later in 2013 as the Lövbacken table.

Marian Grabinski designed this seminal, wooden set of shelves for Ikea in 1962. The compartmentalised bookcase went on to inform several iterations, including the popular Kallax unit still sold today. According to the company, the original wooden product helped to develop “strong relationships” between Ikea and Polish suppliers, which enabled the furniture brand to stay “affordable”.

The laminated wood and fabric armchair was another “classic” that later evolved, according to the furniture company. It was originally designed by Japanese designer Noboru Nakamura, and later became known as the Poäng collection. The chair has no hind legs, but is instead supported by one wooden arch that connects the arm rests with one set of front legs. The Klippan sofa was first launched in 1980 and is still sold today. Ikea coined it as a sturdy and practical sofa, that could withstand children jumping on it and which had cover that could be removed for machine washing. The design is a simple, rectangular shape, with four, short legs. Compact, two-seater Klippan sofas now exist, but the machine wash has been swapped for a vacuum clean.

The simple and functional Lack side-table still exists today, and was complemented in 1982 with a series of straight shelves in the same style. The table was designed to be “strong and light”, says Ikea and the “board-on-frame” technique used to make it went on to inform other Ikea products in the future.

All images courtesy of Ikea.

5 design things to look out for in February 2018