Wikipedia turns 20 this year. The online, collectively-edited encyclopedia – which has always remained free – is one of the most visited websites in the world, familiar to students reading up on subjects, writers of trivia quizzes and fans of obscure culture alike.

What is likely less well-known is its design output. Its in-house team – known as ‘the brand studio’ – is responsible for telling Wikipedia’s story, often in places it hasn’t reached yet. “The ethos of the studio is to focus on the people we don’t have – the regions, communities, cultures, languages,” director of brand Zack McCune explains. While 1.5 billion devices come to the website each month, McCune says that this isn’t enough. The team is instead working towards a vision of “a participatory global knowledge community”, he adds.

Responsible for Wikipedia’s image around the world, the team spreads awareness about the platform through international campaigns and unexpected collaborations (with Parisian fashion brands, for instance) and works on internal design issues, like explanatory icons for the website. It also works on strategy and communication for Wikipedia.

Running through this work is the awareness that Wikipedia is an off-beat online presence. The team knows, for example, that there are entire meme accounts dedicated to Wikipedia’s weirdness. There’s also the ‘Wiki Game‘ and its ‘Personal Life’ sections, which The Washington Post calls “everyone’s favourite part of the internet”. “Ultimately it’s because humans are weird,” McCune says. “This is content about people but it’s also written by people – the quirks are where the humanity is shown.”

The team sits within the Wikimedia Foundation, a non-profit organisation that owns Wikipedia. It comprises eight members, split between brand (which focuses on collaborations) and the creative side (where the designers tackle briefs). The team also works closely with the product design team, which helps refine how Wikipedia appears on platforms around the world. Because of the team’s international backgrounds – with designers in South Africa, London, and America – it has worked remotely long before it became commonplace, according to McCune.

That means Slack is used a lot. And while the team meets once a week, other conversations have to negotiate time zones. It’s most common for team members to be working on a project by themselves or in a pair, McCune says, though bigger collaborations also occur. “Eventually we want to find a way that we have even more of a global presence,” McCune explains, and each project adds more illustrators, designers and agencies across the world into the mix.

As projects are so varied, no process is the same. At the moment, the team is working on a series of icons to better explain Wikimedia’s grants programme, for example. The team’s creative director Khanyi Mpumlwana (based in Johannesburg, South Africa) says that one of the most dynamic projects was for Wikipedia’s 20th anniversary. It started with a date, but led to broader questions. The team had to work out what people’s relationship with Wikipeda is: “Are they thinking about all the world’s knowledge in one place, or do they just want to know what happened on season eight of Grey’s Anatomy?’

The result was an evolving series of bright, celebratory graphics – called ‘Wiki wing dings’ – by illustrators Jasmina El Bouamraoui and Karabo Poppy Moletsane. They were animated by Canadian design studio Good Bad Habits. For Wikipedia’s actual birthday (which was in January), a new birthday logo appeared on the site.

Another anniversary was honoured in print. To celebrate Spanish Wikipedia’s 16th anniversary, the team partnered with the Mexico City Metro system on a commemorative ticket. It was a challenge to design for the medium, McCune explains – the brand’s three-dimensional logo had to fit the constraints of a ticket and low resolution print quality. The team’s graphic designer, Blanca Flores, recreated the logo without shading so it would still be clear on a paper ticket while a hot pink identity was incorporated – reminiscent of the Mexican architect Luis Barragán’s work. 10 million special edition tickets were created; over 4 million passengers used the system each day the tickets were available.

The team usually works on three to six projects at a time, and timelines vary. For the 20th anniversary, the team also designed a ‘hashflag’ – the 72×72 pixel icon that follows a promotional hashtag on Twitter – depicting a W icon surrounded by confetti, which took around three weeks to complete.

Wikipedia tends to thrive in unexpected places, as shown by a collaboration with Parisian streetwear label Études. “Wikipedia has a punk ethos,” McCune says. In the age of big tech, it’s distinct for offering all of its content for free, he points out, and even the black and white (with blue hyperlinks) aesthetic harks back to the early days of the internet.

Designed for the spring/summer 2020 collection, the clothes featured Wikipedia’s logo and other brand iconography on hoodies, caps, and T-shirts. On one shirt, the Wikipedia entries for Diffusion and Illusion (the line’s theme) are laid out. “The Études collection celebrated the interface in a really interesting way,” McCune says. “This is what mediated knowledge on the internet looks like.” 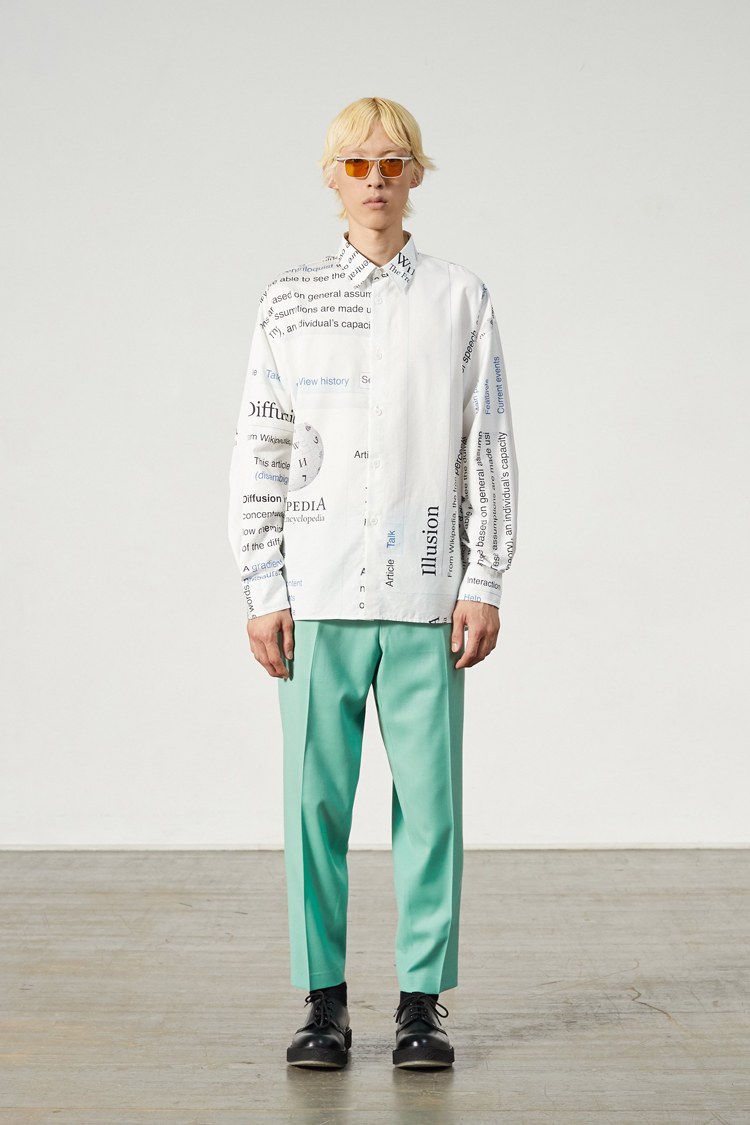 What are some of the challenges?

Apart from negotiating time zones – solved by ‘doughtnut days’ where one designer meets particularly late or early in their day – the team feels the responsibility of Wikipedia’s over 250,000 volunteers. Wikipedia is run by volunteers, who run and edit pages. “We’re designing for the world to appreciate Wikipedia, but also expressing on behalf of all these volunteers who own Wikipedia,” Mpumlwana says. “It belongs to them.” As such, she says that they never design something complete, but rather wait for it be completed by the volunteers. Both McCune and Mpumlwana stress that their feedback is crucial for projects. 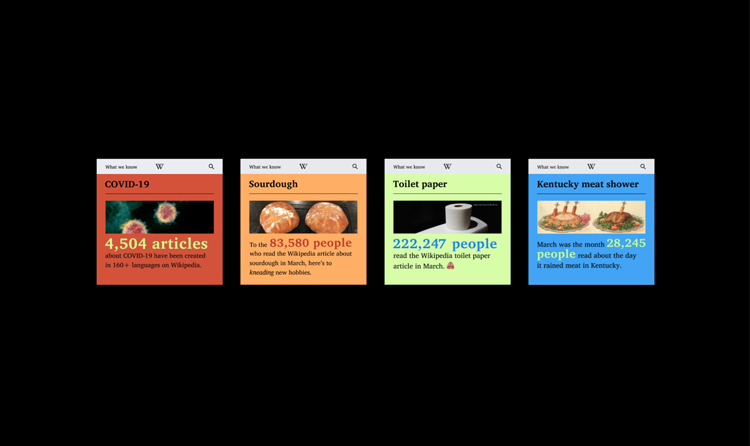 What do other designers do?

When the pandemic took hold last year, McCune says that there was an “explosion in site traffic”. “Volunteers were editing articles about Covid at an incredible clip,” he adds. “It was a real portrait of how Wikipedia is part of society.” This was especially notable in an era of misinformation. Working with the team’s multimedia designer Hang Do Thi Duc, a campaign and sub-page were created around the idea of trust in the age of Covid.

Inspiration was taken from filing systems and colour-coding in repositories, while a changing colour system was adopted to show when different pages were trending. These included the pages for sourdough and toilet paper – visited by 80,000 and over 200,000 people respectively – at the start of the pandemic. The project also highlighted how over 4,000 articles had been created in over 160 languages about Covid. The data visualisation project was a good example of Wikipedia’s weirdness, Mpumlwana says. “It’s not just thinking about the virus but how humans are responding to it,” she adds. 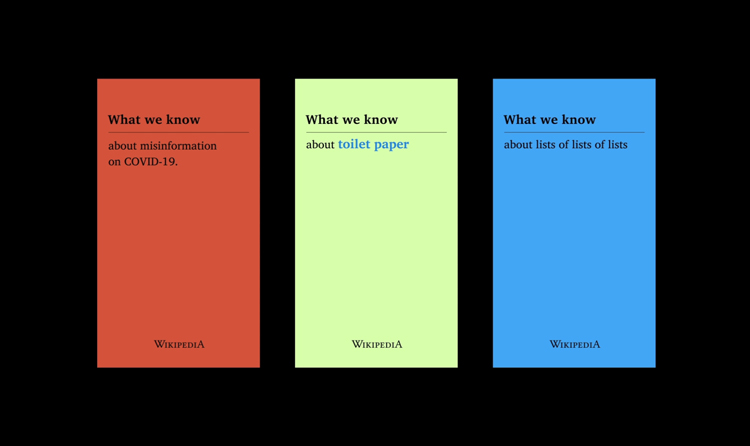 As far as dream collaborations go, music is high on the agenda according to Mpumlwana, while McCune has a passion for poster design. Other goals might be more long-term. Mpumlwana says she’s interested in accessibility – how the brand could be used to create accessibility for people who aren’t fully literate, for example. This will likely involve experimenting with Wikipedia, or “breaking” it, as she puts it. “We want to learn what participating in knowledge looks like when you don’t have a degree in writing essays or know how to use Harvard citation rules.”

You can read more in our series about in-house design teams here, exploring the creative cultures at organisations like the Barbican, Facebook and BBC.