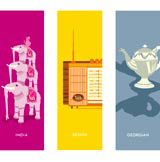 Williams Murray Hamm has created a series of graphic identities for the Victoria & Albert Museum shop, the first phase of which were introduced last week. The ten individual identities, created for a five-figure sum, represent types of collections in the museum, entitled India, Islam, Fashion, Orient, Tudor and Stuart, Georgian and Victorian, as well as shop sections including books, jewellery and children. The graphics are designed to apply more logic to the products on display and establish clearer links between them and the actual collections, says V&A head of retail Jo Prosser. The graphics have been applied to a range of banners in the shop last week and will roll out in the next few weeks across signage labelling and packaging in the spring. They may be applied to interiors but no decision has yet been made, she says. ‘I didn’t want the graphic design work to be too didactic,’ Prosser says. The colours representing different collections, such as pink for India, should ultimately be recognised on their own, she adds. Williams Murray Hamm commissioned illustrator Ian Bilbey at the Central Illustration Agency to create the icons. The V&A logo, which is incorporated heavily across products sold in the shop, will remain a key feature, says Prosser. ‘The logo is very well-known and was not part of [Williams Murray Hamm’s] brief,’ she adds.