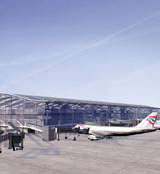 The green light for Heathrow’s Terminal 5 puts an end to the longest running public enquiry in British planning history and can only be good news for British consultancies.

‘The building of Terminal 5 will result in a vast array of projects throughout the 37ha development,’ says JHP strategic director Steve Collis. Some groups, including JHP and Priestman Goode, have been working on T5 for years, though the exact nature of their work is a closely guarded secret.

‘Some projects will be [British Airports Authority]-focused, others will focus around individual airlines,’ says Collis.

The list of projects will include retail planning, interiors for retail and leisure facilities, the design of general airport interiors, individual airline lounges, check-in desks and security areas. There will also be opportunities in terms of signage and information provision, branding and brand communications, says Collis.

Work on the £2.5bn first phase, which covers the development of the infrastructure of the main terminal building as well taxiways, roads and other transport links, is expected to begin in spring 2002, providing that final planning permission is granted by Hillingdon Council. It is likely to be completed in 2007. Despite the events of 11 September and the damage done to the aviation industry, neither costs nor the size of the project has been scaled back, says a Heathrow Airport spokesman.

‘Once BAA has the agreement that it can build the terminal, it can start to think about interiors and things like that. At the moment we are just at the concept stage. The design detail will come later,’ the spokesman explains.

No exact timeframe can be given as to when consultancies will be appointed, he adds.

Terminal 5, which will be able to accommodate about 30 million passengers annually, will consist of a core terminal building and two satellites. An extension will be made to the Heathrow Express rail link from London’s Paddington. Associated facilities, such as car parking and hotel accommodation, are also planned, which will provide further work for consultancies.

The scale of the development will present an opportunity to inject a ‘bit of individuality’ into different areas of the airport, says Robbie Gill, director of The Design Solution, which has worked on the design of airports across the world, including Gatwick’s North Terminal.

‘To make large buildings interesting there has to be the potential to segment areas to inspire people to move through it. There is a trend in terminal design for minimalist elegance. If you have an enormous building that all looks the same there is no catalyst to make people explore the opportunities a building presents. If you can create areas that are different through the use of colour, lighting and character design you can encourage people to explore,’ says Gill.

The increased movement of people around the terminal will increase the commercial opportunities of the building, a key requirement of modern airports, he adds.

‘When Terminal 4 was built, the pressure to make money from non-aviation based activity was not there. Terminal 5 is the first terminal to be built in the UK that has a totally integrated approach in terms of balancing commercial aspirations with operational issues,’ Gill says.

BAA controls the retail operations of UK airports, and British Airways will be Terminal 5’s principal occupier. The involvement of BA raises questions, both about the branding of the terminal and the movement of passengers, suggests Collis.

BAA’s core interest is to get people spending money in its retail and leisure outlets, so consultancies will be tasked with creating designs that facilitate consumerism. BA, meanwhile will want to get passengers on to its planes via its lounges, so design will be used to ensure maximum customer satisfaction of the BA brand.

Which client a consultancy is working for will determine which case it pushes, but designers will have to think of the customer experience at all times, says Collis.

‘A consultancy working for BA will look at the brand presence of the airline and its lounges. BAA, meanwhile, will aim to have the right type of retail outlet to match customer flow. Within retail outlets, layout is important, easy access to goods is important and communication of the value of goods is fundamental,’ Collis adds.

While it is unlikely the terminal will be designed in red, white and blue, BA will want to make sure its presence is significant through the use of interior and signage design.

There are also questions about the way individual parts of the terminal will be branded. For example, it is possible that the retail area will be given its own brand name like that at Amsterdam’s Schiphol Airport, badged See Buy Fly.

The development of Terminal 5 is an opportunity for design to stamp its mark on yet another landmark, while the international nature of the project will champion British design across the world.

Hair at its Hairiest