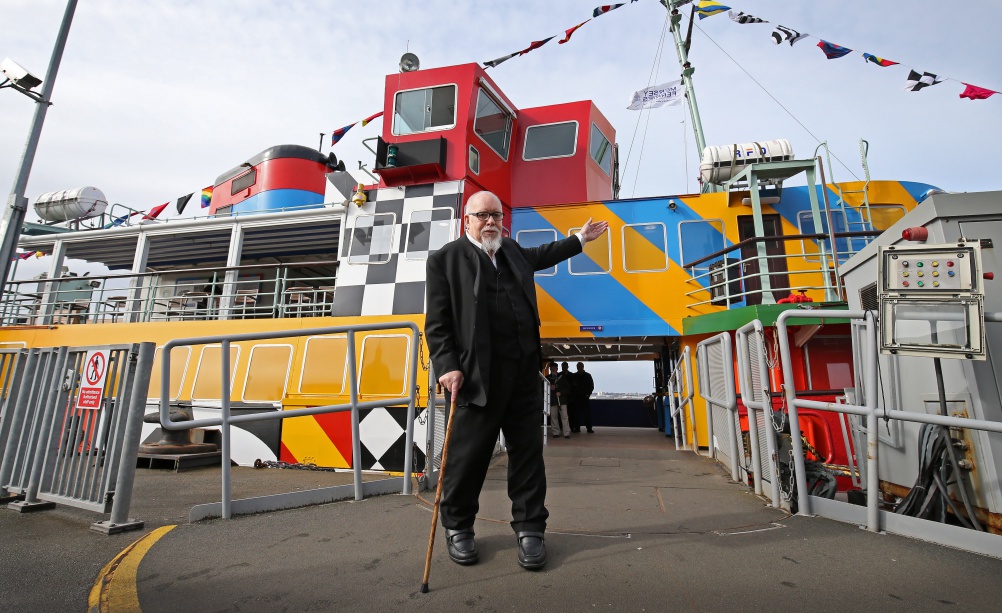 Sir Peter Blake has created a moving piece of public art by designing pop art graphics for the exterior of a passenger ship in Liverpool.

The artist has designed a “dazzling” pattern for the Mersey ferry Snowdrop, which was then painted onto the vessel by ship repairers Cammell Laird.

The artwork, named Everybody Razzle Dazzle, will remain on the ship for two years as people use it for commuting and for canal cruises. 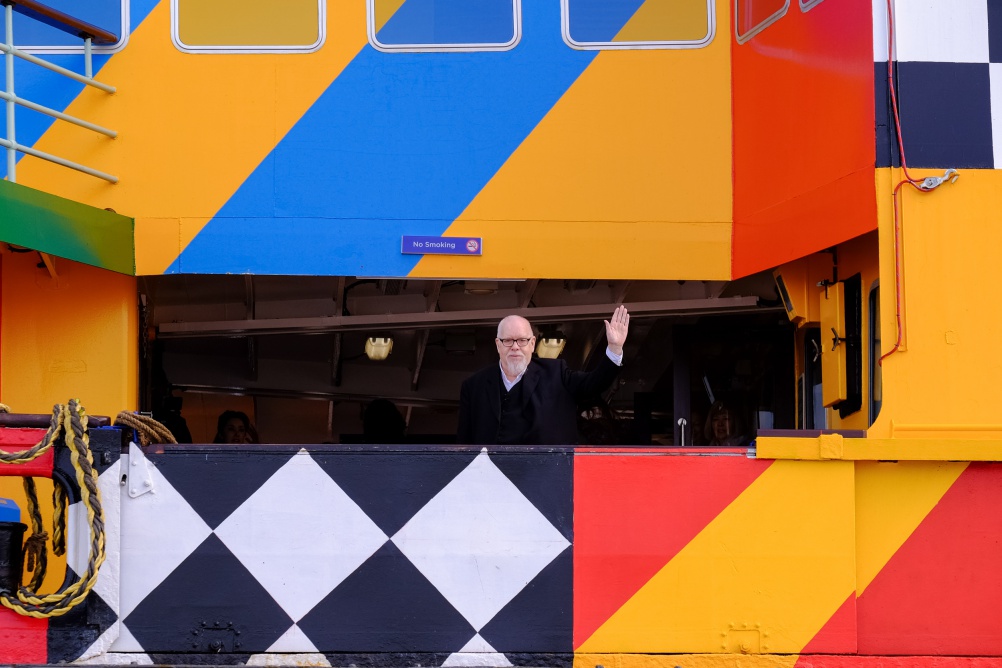 “This is the first real piece of public art I’ve been commissioned to do,” Blake says. “I’ve always been involved with the public in that I’ve tried to make things that are available for anyone, such as prints and postcards that kids can buy with their pocket money.”

The graphics, composed of 22 different colours in the form of monochrome and multi-coloured patterns, are based on “dazzle” camouflage, which was used in the world wars to mislead the enemy by making it hard to guess the ship’s speed, range and direction. 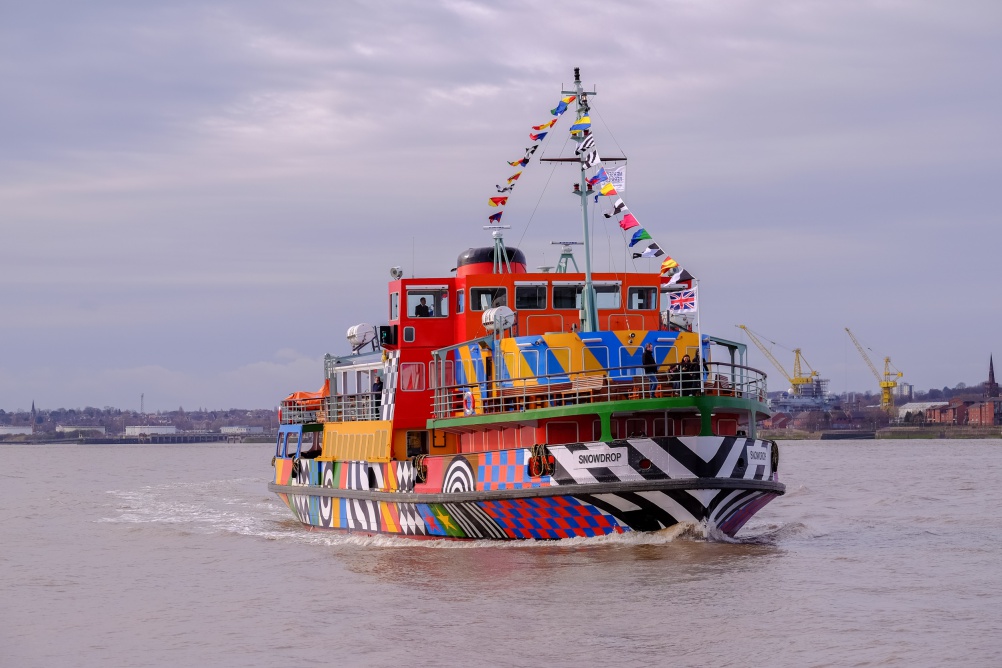 “My initial thoughts were very much that it was a memorial to the dazzle paintings in world war one,” Blake says. “In 1914, it was a form of art deco – it was an invention. Now it’s evolved, and is much more colourful than the initial design.”

Everybody Razzle Dazzle is a commission from a number of organisations including Liverpool Biennial, 14-18 NOW: First World War Centenary Art Commissions and Tate Liverpool, also in partnership with Merseytravel and National Museums Liverpool.

Aboard the ship there is a display depicting the role of the Mersey Ferries in the first world war, curated by National Museums Liverpool and Tate Liverpool, and an accompanying educational programme for schools teaching children about maritime history. 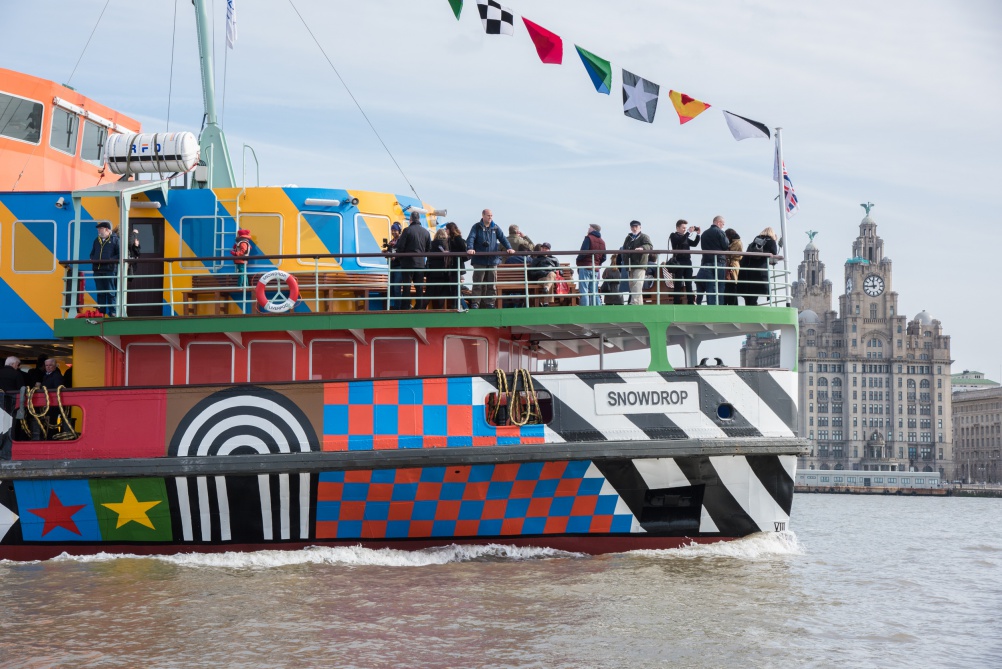 Blake has links with Liverpool, having first visited the city when he served national service with the R.A.F. in 1952, and having been awarded first prize in the junior section in the John Moores Liverpool Exhibition in 1961.

“Peter Blake was the ideal artist, given his associations with Liverpool, and the nature of his work,” says Jenny Waldman, director of 14-18 NOW. “The Mersey will be carrying passengers, so it’s all about people enjoying and feeling inspired by it – his work lifts the spirits.”

She adds: “There’s not a lot to celebrate in the first world war, with many sad stories of devastation. But the dazzle ships celebrate the spirit of invention, where artists were employed by the navy to save lives through creativity and design.”

“I would hope the dazzle ship will bring cheerfulness for the public,” Blake says. “When thinking of what to call the scheme, the Bill Haley song jumped to mind. It was initially just about dazzle, but now it’s about razzle as well – remembering the first world war but also having a party.” 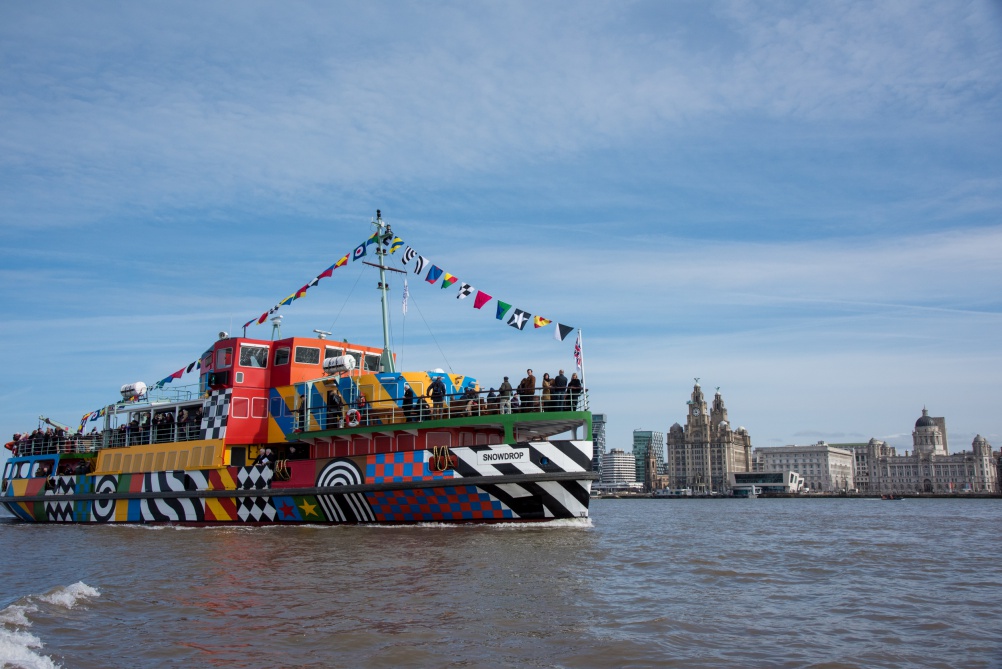 Blake’s ship hopes to see 2,800 commuter journeys while “dazzled”. The project was supported by Arts Council England, the Department for Culture, Media and Sport and the Heritage Lottery Fund. 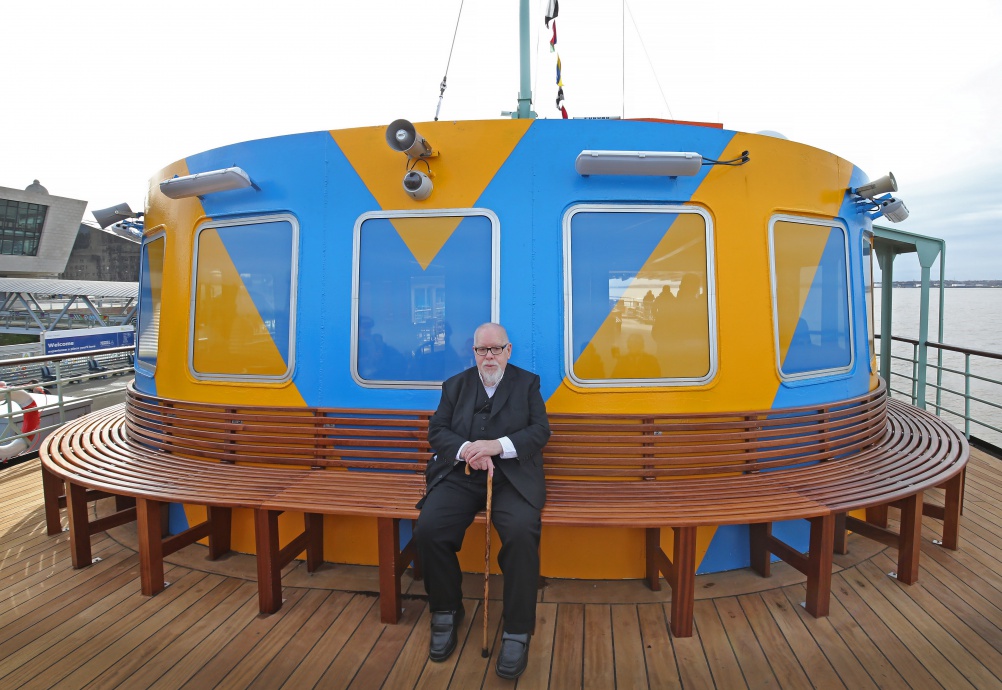 Ostmodern helps turn 4oD into All 4