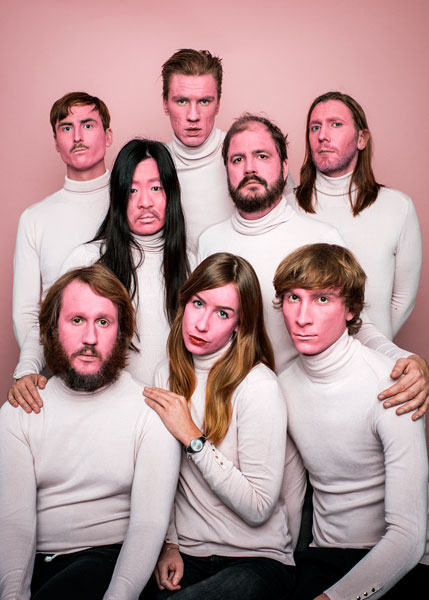 Swedish consultancy Snask markets itself by saying it makes “kick ass” branding, design and film – so it’s evident from the get go that it’s making a statement. Set up in 2007 by Fredrik Öst and Magnus Berg when studying graphic design in the UK, the multi-disciplined consultancy has embarked on projects ranging from product packaging for vegetarian food brands to promotional material for food festivals and campaign posters for liberal youth groups.

Through a distinctive colourful style, its ethos involves pursuing the unconventional, praising equal rights and making enemies to gain fans – but having also completed work for companies such as Samsung, Microsoft and beer brands, they say it’s hard not to be hypocritical.

We speak to creative director Fredrik Ösk, partner Erik Kockum and 25-year-old British art director Richard Gray about the balance between breaking the mould and staying afloat in a tough industry.

Design Week: What does “Snask” mean?

Fredrik Öst: At university, Magnus and I spoke about how our design should be eye candy. “Snask” means eye candy in old Swedish. However, it also means filth and gossip – three meanings in one word that we found brilliant. When you’re a child, you’d do anything for candy; when you’re an adult, anything for filth and when you’re an older person, anything for gossip about those younger than you. So Snask means life – in a way.

DW: What is the design scene like in Sweden compared to the UK?

FÖ: The UK is very minimalistic. I’m not sure why it’s become like that but I think it needs to change – someone needs to come in and break all the rules. But then in Sweden, we don’t really have a design industry. It belongs to advertising and I don’t think we identify ourselves with that.

Richard Gray: In the UK, it’s a really tight knit community – all the design studios seem to be in the same place, whereas in Stockholm it’s kind of spread out.

Erik Kockum: People in the design world in Sweden tend to be really scared. They don’t have the power to stand up for themselves and be proud of their work. We attended an awards ceremony for design and illustration, and no one gave a speech when they won. In the design community, you can hide. You can’t do that in advertising because you have to speak with clients.

RG: I think Swedes can be a bit more reserved – these guys are an exception.

DW: What has been your favourite project?

FÖ: Malmö festival – it was one of our biggest projects, and one of our favourites because we got to do it all by hand. 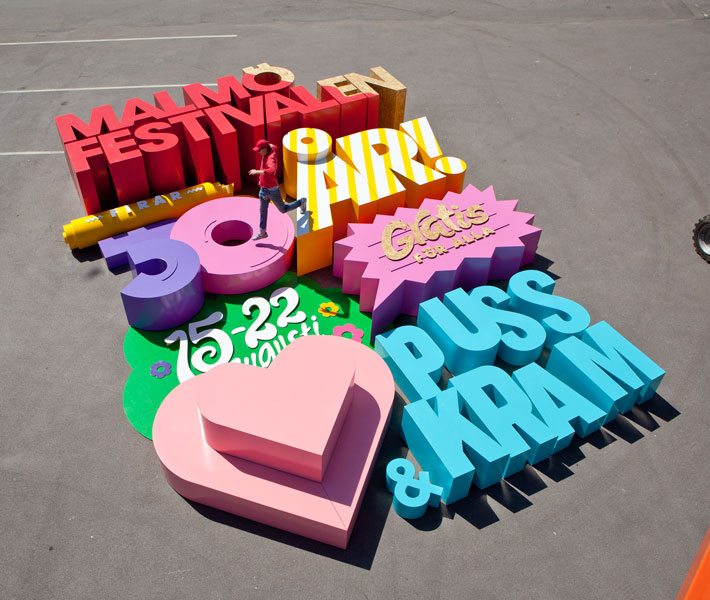 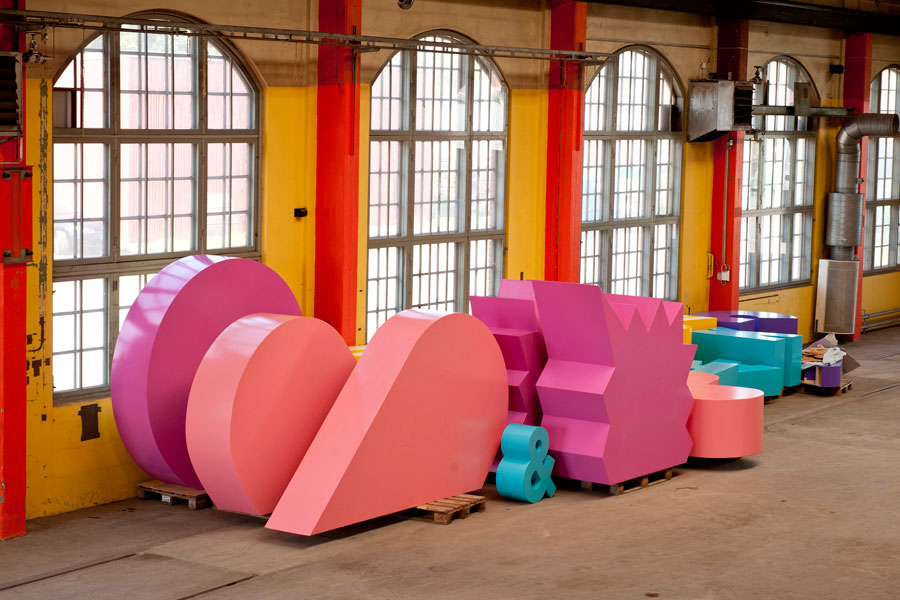 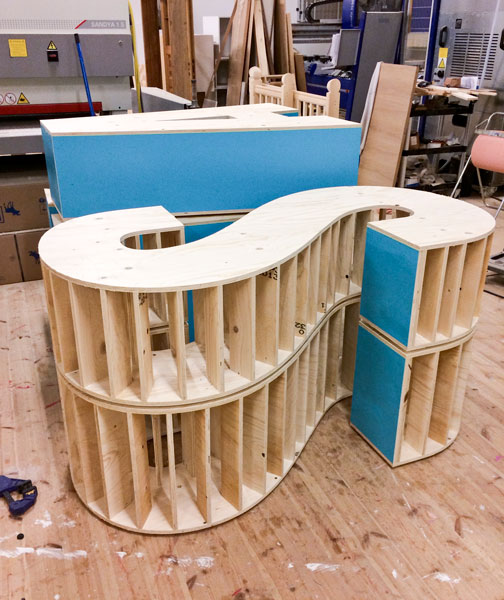 DW: What has been your most controversial project?

FÖ: We designed a new identity for a liberal youth party in Sweden, and produced campaigns for them about their election proposals. We sat down for a whole week and decided that we couldn’t find anything good about their new school reform proposals, which were the main focus of their campaign. But we thought there were some good ideas about liberalism, so we proposed that we focus on those instead, and they agreed. It was controversial to change the view of their campaign, and this is all subjective but the point is we need to be passionate about what we’re doing. If we don’t feel it, then we won’t do a great job.

EK: Some of our work is not necessarily controversial but political, such as when we worked with the Swedish Social Democrats Youth League. People hate it when others take a stand.

DW: Has your controversial nature ever hindered you with big companies?

FÖ: No, because we take our own path.

EK: There probably has been some decision behind closed doors with some companies who don’t want to reach out to us because we’re “too much” or because we have a weird name – we would never know. But we don’t want to work with them anyway.

RG: Usually people come to us because of who we are and what we’re doing.

DW: What do companies such as Microsoft think of your work?

FÖ: They love it – they want to stand out, and a lot of big companies would rather have a consultancy like us that they can pull back creatively than take on a boring one which they can’t even push.

EK: Some people believe that we are not professional and just playing around – but what we do on stage, and what we do in business, is very thought through. They’re very different worlds, with very different strategies. We’re performing on stage, but we’re also having fun. That’s who we are. But we can also sit in a business meeting and answer questions sensibly. There’s a balance.

FÖ: Everything to do with our work and our delivery is professional.

RG: People visit our office, and it can be silent with everyone working solidly. That’s a really Swedish thing – you work really hard in the time that you have. People are surprised to see us like that.

EK: We have interns who come and think we’re just going to party and sing karaoke all the time – of course we do all of that, but we work too.

FÖ: We have to have quality in our work to back up doing those things. We are 100 per cent involved and produce it from start to finish – we’re not just weird creatives who come in with ideas, throw them on the table then someone else makes it happen.

DW: How do you feel completing work for corporate companies?

FÖ: We have an ethos but it’s also really hard. We turn down tobacco companies, but we don’t take any pride in this because we work with beer companies and alcohol is doing a lot of bad things to the world. We wouldn’t work with the worst, but at the same time we’re hypocrites so we’re not going to have a big moral high ground about it – we know how it is.

EK: We care about this stuff, but we would never issue a statement saying we’d turned people down – it’s not that kind of business.

DW: Part of your ethos is all about saying “yes” – who would you say “no” to?

FÖ: We’ve said no to the Philip Morris tobacco company.

EK: We would say no to some right-wing political parties. But it’s so hard to say – maybe today we’re in a position where we can turn things down. But a couple of years back, we were struggling. The truth is if someone comes over with a big bag of money, it’s not that easy to say no when we need to pay employees. I hope that every year we’re in a better position. If we had the choice, we would only do the good stuff.

DW: If money wasn’t an issue, what good stuff would you like to work on?

FÖ: A lot more volunteer work for organisations that do real and great work to help others. But also our self-initiated projects, such as Yay Festival, our creative conference, Väg, our rock band and Snask Beer, our brewery and beer.

DW: What do you think it is that makes a designer rebellious or unconventional?

DW: How does Snask stand up for minorities in its work?

FÖ: Every brand should stand up for this. First and foremost, in its company structure. When it comes to clients, we need to push them to do the same in the projects they give us. It can simply be making sure that it’s not only men in every photo or film. That’s where it resonates and then gets out by word of mouth or public relations. With Yay Festival, we make sure we book 50/50 between genders and also work to have diversity in ethnicity, age and background.

DW: You speak a lot about “making enemies and gaining fans” – who are your enemies?

EK: The old world – it’s comes through even more in advertising, but in design too. We don’t like old, conservative attitudes – as a result we mostly have female clients.

FÖ: Old men rule the world and have a lot of power.

DW: Who has inspired you?

EK: We use so many people as inspiration all the time. When we travel and meet people who are starting their own thing because they’ve heard about us it’s amazing, because those are the beliefs that we started off with ourselves. You’ve got to fight the old world and go your own way.

DW: What projects do you have in the pipeline?

FÖ: We’re working with Dropbox currently, and the beer brand Brewdog is a new client.

FÖ: Everything is really, because design and film become one. Wes Anderson does both – he uses a lot of art direction in film and that’s something we really like.

EK: The next step of Snask would be to define it even more and make the crossover as much as we can.

DW: What has been your proudest moment?

FÖ: We get proud when our employees are really happy and feel like they want to work at Snask.

FÖ: If you weren’t here I would have said the same.

EK: That’s super important – it’s not only about designing or creating, it’s also about running a business. We’ve all been treated badly as some employee at some shitty company once – it’s a big thing for us to put a lot of effort into our employees and not just work. That’s the brand Snask.

DW: What advice would you offer young designers?

FÖ: Have a great portfolio and make people interested in you by being yourself. I don’t think anyone is uninteresting – you can just sell yourself in a bad way if you come across like that. Don’t give a damn what the old people say.

We spoke to Snask at Offset 2015, where the consultancy gave a lecture accompanied by a performance from its rock band Väg.