The coronavirus pandemic may be unprecedented, but the resources being used to combat the virus are unlike what’s come before too.

And in many cases, working out how to use these resources is still in motion – the scramble to open-source medical supplies or supply ventilators, for example. Technology might be the biggest advancement in how we fight disease, and is still developing as governments explore all routes in combatting COVID-19’s spread.

Singapore was an early adopter of using technology to grapple with the virus. GovTech, the nation’s digital branch of government which aims to “develop Singapore into a Smart Nation”, developed an app to prevent the spread of coronavirus. It’s now been downloaded by over 800,000 users; the sovereign state has a population of more than 5.6m.

How does TraceTogether work?

The app, called TraceTogether, is “community-driven” and built off the idea of contact tracing, one of the most universally-accepted ways of combatting pandemics such as coronavirus. Contact tracing works by informing people if they have come into contact with someone who has the virus. If someone is tested positive for COVID-19, contact tracers (from a public health body) will ask the patient to identify who they have been in contact with and inform this group of people as soon as possible.

The difficulty with contact tracing is that it is not always easy to remember who you have been in contact with. The Singaporean app aims to simplify that part of the process.

A user needs to download TraceTogether and turn on Bluetooth. When a phone comes into contact with another device that has the app installed and Bluetooth switched on, both contacts are stored (in encrypted form) in both phones via the Bluetooth connection. This builds up a contact list on a user’s mobile – though all details are anonymised.

If someone who uses the app is then infected with COVID-19, they upload their data to the Ministry of Health – Singapore’s public healthy body that works with TraceTogether – which then decrypts the user’s information and contacts all the TraceTogether users in the infected person’s contact list.

It is, the developers say, an attempt to more accurately inform people about their personal safety and risk of infection.

Focusing on the who rather than the where 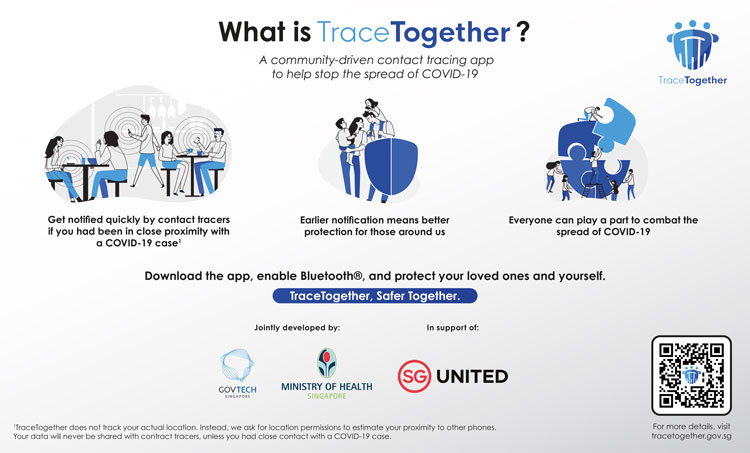 GovTech stresses that no personal information is given. And because it relies on Bluetooth, GPS (and users’ geolocations) are also kept private. GPS also works less well in urbanised setting, so Bluetooth is more consistently reliable.

By relying on Bluetooth – which has a shorter signal length than GPS – it focuses more on “the who rather than the where”. For example, you could be in the same building as someone with COVID-19 but several floors away. GPS wouldn’t pick up on that difference, but Bluetooth would alert you if you were within a much closer distance (signals usually range around 10m).

It was developed in anechoic chambers – rooms which absorb sound and electromagnetic waves – in conjunction with Nanyang Polytechnic (a technology college in Singapore) and the Institute for Infocomm Research, which researches machine learning and intelligence. 40 engineers worked on the app over a period of eight weeks, and it is based on the country’s BlueTrace protocol – which informs “decentralised and centralised models of contact tracing”.

Sutowo Wong, the Ministry of Health’s Director of Analytics and Information Management stresses that the app is not meant to “replace” the contact tracing process: “Instead, we see it as an important tool in the toolbox of contact tracers. It is not sufficient to rely on technology alone, as we need the expertise in public health and communicable diseases to make sense of the data collected using this technology.”

TraceTogether launched March 20, and last week the Singapore government announced that it would be making the technology freely available to developers worldwide. The app development team announced: “We are working around the clock to finalise our protocol reference documents and reference implementation, to open source what we have built so that others may deploy their own flavours of TraceTogether.”

Other Asian countries, such as South Korea, have used contact tracing techniques to isolate cases of COVID-19. While they have been widely praised for their management of coronavirus, these countries also have more experience in dealing with such outbreaks. They were affected by the 2015 MERS (Middle East Respiratory Syndrome) outbreak and SARS (Severe Acute Respiratory Syndrome) epidemic in 2002.

South Korea’s technological response to COVID-19 has been even more personal: it sends details of an infected person’s age, gender and recently-visited locations (such as a bus route) to anyone within 100 meters via text.

Could the UK implement a TraceTogether-style app?

Sky News revealed yesterday that the UK government plans to release a similar app “either just before or just after the lockdown is lifted”. The report claims that NHS bosses hope the app will be used by over half the population.

Plans for the development of such an app have been known for a while, but the new details – about how it follow in the style of TraceTogether – are new. In a similar way to the Singaporean app, information will not be stored centrally – by the NHS, for example – but on users’ phones.

Pivotal, a subsidiary of American software company VMWare, has reportedly taken over development of the app. Around the world, governments including Ireland’s, Australia’s and Germany’s are also working on a tracing app.

Despite TraceTogether’s insistence on privacy, there are concerns about data collection and surveillance – even if the UK is facing a mounting pandemic.

In an open letter published by “responsible technologists”, Rachel Coldicutt, former CEO of technology think thank Doteveryone, says that “the immense pressure being placed on teams within NHS and NHSX to deliver at speed must not lead to ethical corners being cut that will undermine trust in the NHS”.

NSHX is the NHS’s digital innovation arm. The open letter calls on the department to “institute a culture of working in the open”, “introduce bold emergency government measures” and to “develop collective mechanisms for social license” to ensure that groups affected by data collection have a say in development of an app like TraceTogether.

The group also points out that such an app would not be helpful in a country where not everyone has a mobile phone (22% of UK adults do not have a smartphone) and that there is a lack of clarity over who would develop the technology.

You can follow all of Design Week’s coronavirus coverage here.