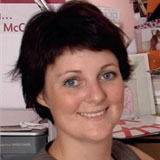 Laura McCafferty won’t compromise her labour-intensive craft, but she has the kind of promotional savvy that is unusual in someone who graduated two years ago. It’s a potent mix, says Hannah Booth

One of the more obvious results of the craft revolution of the past few years is the blurring of distinctions between art, craft, design, illustration, printing and designer-making. Laura McCafferty’s work could happily sit under all such disciplines. Add reportage, embroidery and textile design and you have some idea of what she is all about.

‘I call myself a textile artist but that can have a dodgy ring to it, which I’m working hard to change,’ says McCafferty in her soft Northern Ireland burr. The hard work is now paying off. She has been in business just two years – after graduating with first class honours from Nottingham Trent University – yet has an enviable clutch of bursaries, shows and commissions under her belt.

Her work might best be described as embroidered illustrations of real people and social situations. Each piece she makes starts life as a line drawing, becoming a coloured screen print that is scanned. She then hand-stitches fabrics on top – the large, child-like stitches are part of the effect – prints them and names them as an artist would. The result is colourful, intricate scenes of people and places, often surreally heightened by the use of fabrics. In one piece, for example, the grass outside a caravan is a 1970s floral pattern; in another, a jetty is a washed-out piece of ticking fabric. ‘I’ve always used textiles – it’s time-consuming but I love the physical nature of them,’ she explains. 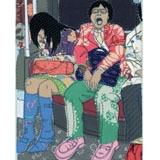 At the start, McCafferty’s subjects were old people. ‘When I first started out, they made me feel safe and warm at a time when everything was new and scary,’ she explains. But when opportunities arose to travel to places such as New York (for January’s International Gift Fair in January) and Japan (a research trip funded by Design Factory, the East Midlands design organisation and Crafts Council offshoot), her style started to change. ‘I began to draw the characters I met, such as this eccentric man who collects 1950s cars and wears two pairs of glasses,’ she says. In Japan, she met the founders of card company Little Dog Laughs, and is now designing a ‘highly unusual’ range of baby cards, due out in January 2007. It’s neither cutesy nor familiar, depicting ‘true-to-life’ scenarios such as a mother pushing a pram up a lane and a baby playing on a lawn.

Commissions such as this started a year ago when McCafferty was approached by the Victoria & Albert Museum to design a range of 25 pieces inspired by the museum’s collections, for the opening of its Eva Jiricna-designed shop. McCafferty, naturally, delved into the V&A’s extensive fabric archives, and hung around the museum people-watching, sketchbook in hand, trying to find subjects for her line drawings.

Since then, McCafferty has had a solo show in West Hollywood in the US, designed advertisements for textile magazine Selvedge and Japanese bank Alico; created pieces for The Lighthouse shop in Glasgow; and she is contributing to a new illustration book.

But next month comes her biggest profile-raising opportunity to date – her first appearance at London’s 100% Design. For this, she is creating her largest ever piece: a textile 2.5m long. Unsurprisingly, McCafferty is keen to get involved in large-scale commissions. ‘I’d love to work with architects who are designing, say, hotel lobbies, offices, theatres, hospitals, working with big budgets,’ she says. ‘So for 100% Design I decided to go for maximum impact.’ She follows this in October with a stand at Origin, The London Craft Fair. ‘I’ve got one of the first stands you see – you practically fall over it.’ 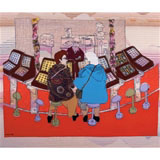 This comment is characteristic of McCafferty: she’s business-brained, ambitious, hard-working and aware of her work’s place in the market. ‘People always ask me to design pointy fashion people,’ she says, ‘but that’s not me. That type of illustration is popular at the moment but it’s just a trend. I draw real people.’ The next Daisy de Villeneuve or Natasha Law she isn’t. She is at a turning point, finding a deeper style. And, for the first time, she’s made a profit – not a bad return on a two-year investment.