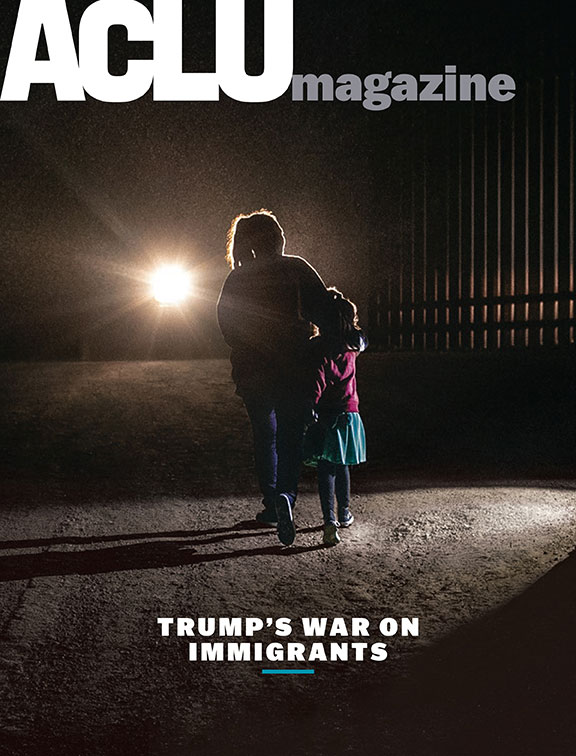 The magazine for the American Civil Liberties Union (ACLU) has a new print design and name that looks to reflect the “turbulence” of American politics since Donald Trump came into power in 2016.

ACLU is a national organisation and charity that was founded in 1920, in a bid to defend and preserve human rights and civil liberties, as laid out by the United States’ Constitution and US law. The Constitution is best known for the Bill of Rights, which includes such liberties as freedom of speech, press and practising of religion and the right to a fair trial with a jury.

The bill also holds some debated liberties, such as the right to keep and bear arms – this right has proven controversial for anti-gun campaigners and activists who believe the US would be a safer place if this was amended.

ACLU is non-partisan but its current stance has included helping Americans “fight back against the Trump administration’s cruel and targeted attacks on people’s rights”, and “stand up to injustice and intolerance”. While it has launched many legal actions against Trump’s administration in defence of civil liberties, it does not oppose or promote any political party or candidate.

The charity’s member magazine was launched in 2014 and is published twice a year, with the aim of informing the organisation’s members about current American civil rights issues, legal battles and what the organisation is doing to defend people’s liberties.

The latest issue, which features the new design, includes features on Trump’s treatment of immigrants and refugees, how liberal activists are campaigning in majority Republican states on issues such as prison reform, and how the electorate will change following a series of voting right initiatives, which will see two million more people have access to the presidential vote in 2020.

The magazine also includes opportunities for the ACLU community to take action themselves, by promoting volunteering and long-term charity projects. 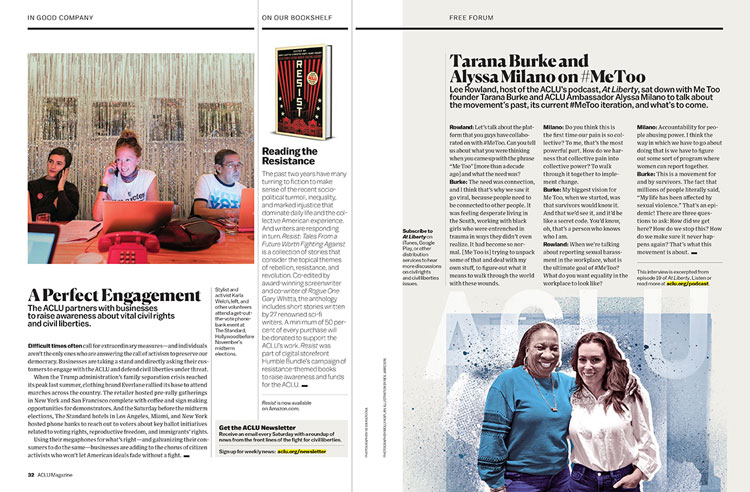 Previously called Stand, the biannual publication has now changed its name to ACLU Magazine, alongside launching a new design format.

The new name aims to put the organisation “front and centre”, says Marie-Adele Moniot, editorial director at the magazine, as well as create a “strong, direct connection” between the magazine and ACLU.

Following the 2016 presidential election, membership to ACLU quadrupled – it was roughly 450,000 prior to the election, and now sits at 1.85 million.

“The name change reflects so many new members putting ACLU front and centre in the turbulent past two years,” she says. “The magazine reflects the organisation’s commitment to informed, engaged citizens.”

Moniot adds that the redesign aims to help communicate with ACLU’s drastic increase in membership. 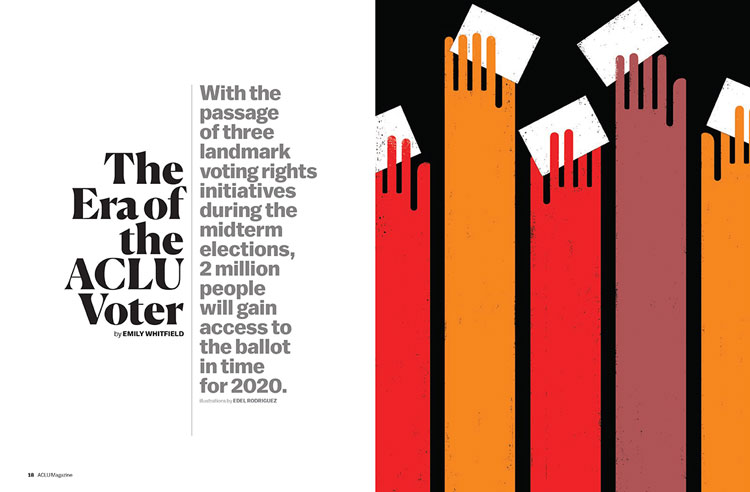 “After the election, ACLU made a public pledge to fight the Trump’s administration’s attack on civil liberties and efforts to undermine the Constitution,” says Moniot. “It was a galvanising moment for Americans who put their trust in ACLU. As our role as guardian of liberty expands, so does our wish to connect with our new members.”

As a result, she says there was a need the magazine to be more visually attractive and “inclusive” for all members – so ACLU invested in a new “compelling” design focused on photography and illustration.

For this, ACLU commissioned design studio Godfrey Dadich Partners to redesign the magazine, which, as well as introducing more imagery and colour, looked to create a more coherent structure for the publication, says Scott Dadich, co-CEO at the design studio.

The studio created a page layout based on the pages in ledger books – books that are used to record financial details, where the pages are separated into grids.

“We wanted pages and stories that the reader can scan quickly and easily, and a scaleable template system that streamlines design and production of each issue moving forward,” Dadich says. 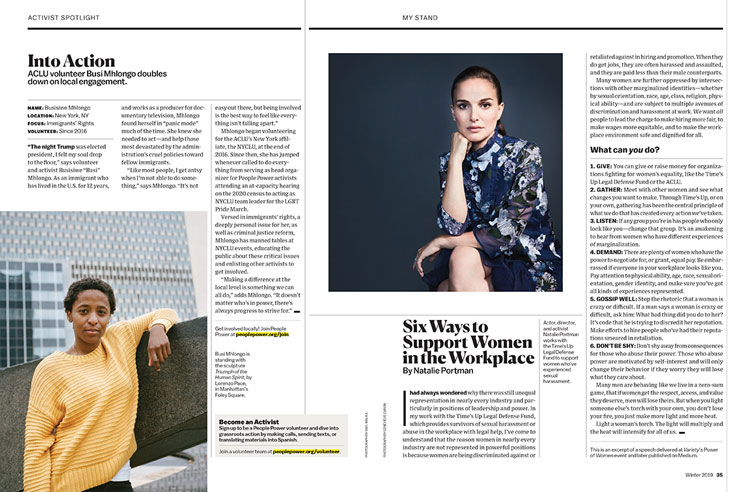 This grid is used to structure text and imagery in an “orderly” way, he adds, which in turn represents ACLU as an organisation that “uses resources wisely and efficiently in the pursuit of justice”.

Alongside this system, three typefaces set in various sizes have been incorporated into the new print design, which have been chosen for “readability” and to “work elegantly together”, says Dadich.

This includes one serif and two sans-serif, including sans-serif Balton used for body copy. This type is been inspired by American Gothic typefaces, which have been use prolifically in American news publications historically, according to Dadich.

A range of photographers from different backgrounds were chosen to shoot for the magazine, in a bid to reflect “ACLU’s dedication to social justice”, adds Dadich. Photos of people are particularly prevalent, with many candid and action shots used alongside natural backgrounds and lighting, to help the imagery appear “empathetic” and “authentic”, he says.

“We wanted the new publication to be bold and compellingly designed, but its assembly efficient,” Dadich says. “Ultimately, we wanted a beautiful print product that informs, inspires and is a valued resource for donors.”

The magazine redesign has now launched with the Winter 2019 issue. See the latest issue of ACLU Magazine in full here. The project took four months for Godfrey Dadich Partners to complete.