“These political posters should be looked at as tools,” says Laetitia Wolff, curator for Get Out The Vote. “Design has a real power to change behaviour.”

Get Out The Vote is the U.S. election poster campaign from the AIGA, North America’s professional association for design. Through an online gallery, the campaign – which happens every four years to coincide with a presidential election – uses the power of design and illustration to “activate” the public and get them interested in American politics, says Wolff.

While the campaign hopes to encourage engagement, it also aims to be non-partisan, and so the posters do not advocate for either the Republicans or Democrats, but simply inspire people to use their vote.

“Voting demonstrates that you belong to a nation, not just a party,” says Wolff. “Though we would still love to see the likes of Bernie Sanders, Hillary Clinton and Donald Trump use the posters as part of the campaigns.”

The AIGA’s Get Out The Vote campaign was first launched in 2004, and looks to both high and low profile designers to create posters that can be included within its online gallery.

The initiative receives submissions from the likes of Milton Glaser and Paula Scher, and a number of other designers, the only specification being that they need to be a member of the AIGA to submit a design. The AIGA has 26,000 members across the continent, spread across 70 different hubs in the U.S.

Alongside an online gallery of all submissions, which at the moment totals around 150 for this year, there are also exhibitions held in conjunction with the Republican National Convention and the Democratic National Convention, which are both taking place later this month. An exhibition of select design works is also held at the AIGA Design Conference in Las Vegas in October.

While the online gallery includes all submissions, the exhibitions are more selective, including a curated selection of 45 posters – to correlate with this year being the 45th presidential election – from “design influencers” and a hand-picked selection of others.

Wolff says the campaign aims to make issues that affect everybody more “visible, legible and accessible”, through using “beautiful imagery” to interest and activate people into starting a conversation about politics.

“Good design makes choices clear,” says Wolff. “Designers have an important responsibility to use their work as a communication tool and to engage citizens – including themselves.”

The campaign has also partnered with the League of Women Voters this year, a non-partisan organisation which aims to mobilise and educate the public, both male and female, about voting. Together, the organisations host events throughout the year to encourage more people to vote by engaging them with design.

Posters can be submitted until 8 November

All AIGA members can contribute posters through the Get Out The Vote submission form until 8 November, the date of the U.S. presidential election.

The organisation also encourages site viewers to download and share the posters, using hashtags #AIGAvote and #GetOutTheVote, with the hope of activating more voters.

These are some of the posters submitted so far this year: 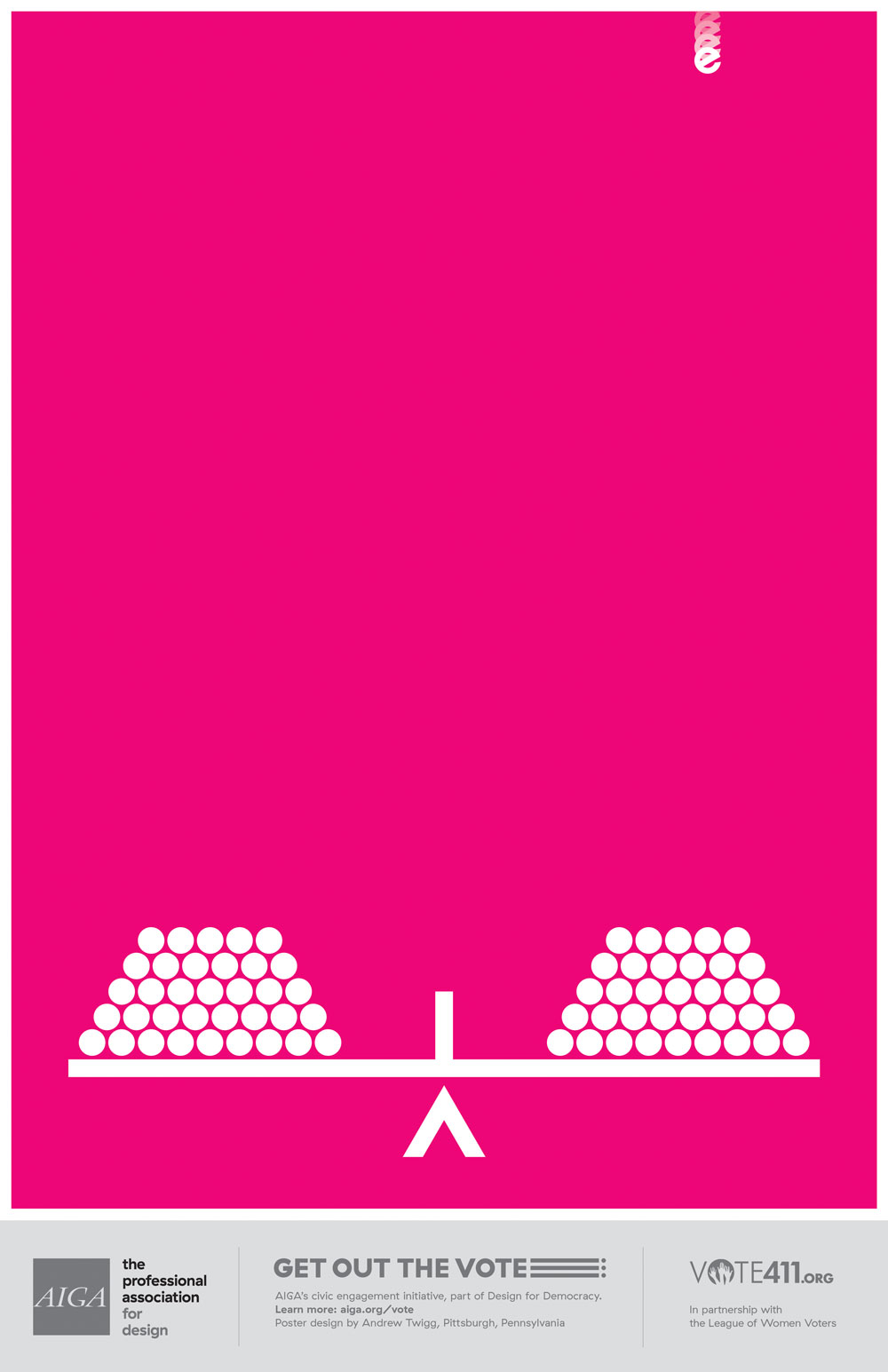 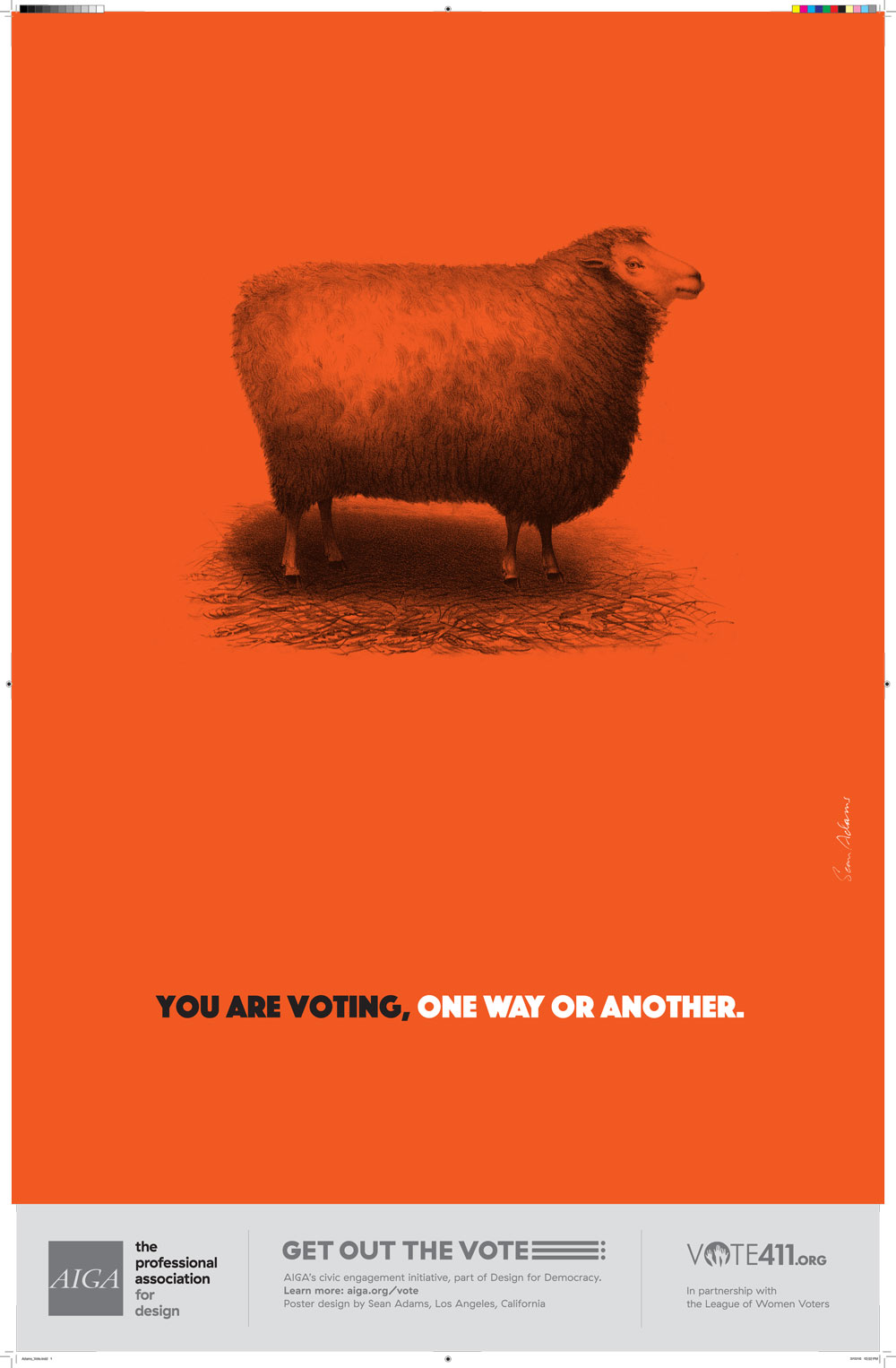