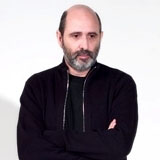 Celebrity villas, office buildings, clubs, hotels and shops – Isay Weinfeld has tried his hand at them all. Bethan Ryder talks to the Brazilian architect, who hates to repeat himself, as his first London project is about to open

If Brazil do it yet again and win this summer’s FIFA World Cup, exuberant Brazilians in London will have somewhere to celebrate in style. Due to open in July, on the former site of Isola in Knightsbridge, is a new Brazilian restaurant, Mocotó (DW 27 April). A venue of two halves, it will feature a buzzing boteco, or café-bar, on the ground floor, with an elegant 112-cover restaurant below. Footie aside, Rio-de-Janeiro-born proprietor David Ponté, who also owns London’s Momo restaurant, is keen to stress it will be a cliché-free zone. ‘The few references people have of Brazil are really obvious ones – the football, the carnival, gorgeous people and the flag – and that’s great, but what we really wanted to do was show another side to Brazil,’ he says. 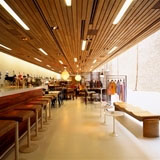 Instead, diners can expect a sophisticated palette of beautiful wood shipped over from Brazil, such as the richly-grained Pao Ferro (often used to make guitars), combined with jute and onyx. Plus 125 vintage 1959 Kiko armchairs by Rio furniture designer Sergio Rodriguez, painstakingly bought from various embassies by the restaurant’s designer, Brazilian architect Isay Weinfeld.

A major name in Brazil, Weinfeld founded his eponymous studio 33 years ago and is renowned for his beautifully simple architecture, often dubbed ‘Tropical Modern’. He is best known for designing stunning villas for various celebrities, but has also turned his meticulous eye to retail projects, nightclubs, hotels, office buildings and furniture.

Mocotó is Weinfeld’s first London project. Although based in São Paolo, he has enjoyed a long love affair with London and its urban planning, visiting annually since he was 17 years old. ‘This is my favourite city in the world,’ he says softly. ‘It’s the mixture between the big city and the very small village. How you have a huge avenue and then a tiny alley, and the mix of use with a flower shop, a pub, a library – many things – with a residential area in the middle. This is incredible.’ 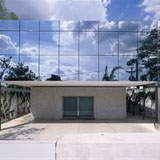 Yet Weinfeld doesn’t consider himself solely an architect and detests ‘tunnel vision’. ‘I don’t really feel like an architect in the strict sense of the word. For me, it’s not a religion,’ he says.

While studying architecture, Weinfeld began to explore other art forms, making conceptual art and also experimenting with Super-8 film-making, an interest that eventually led, in 1987, to him making Passion and Fire, a full-length feature film with partner Marcio Kogan.

Like many architects, he also draws comparison with music and architecture, with ‘rhythm and harmony’. A huge Radiohead fan, he’ll fly across continents to see them in concert. He’s studying music to try to understand, ‘how in the middle of some music, or a particular note, the music will deeply move you. What is this in architecture? Where is this point? How can you create this same feeling?’ Referring to the creative process, he says, ‘It’s like being a conductor. It doesn’t matter if it’s a film, architecture studio or orchestra, but you have to inspire the people, your team.’ 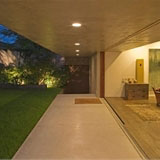 Weinfeld has a team of only 20 to maintain quality of detailing. He also hates to repeat himself. ‘If I make one or two shops and they are a success, and they call me to make more, I’m not going to do any more. I want to do one shop, one hotel, one hairdresser, one drug store. This is what moves me – not the things I know already.’ Hence, perhaps, the diverse scope of Weinfeld’s work – from projects such as the 195-room Fasano Hotel, retail emporium Clube Chocolate, entire office buildings and the iconic nightclub Disco (which features an installation by the Campana brothers), all in São Paolo.

Only recently has Weinfeld begun to undertake commissions outside Brazil. Discussing two current hotel projects – one on a beach in Itacaré, Bahia, the other in Belgrade – he says, ‘I was invited to design hotels for big chains, but I have to touch the owner. I cannot make a Hilton, because there are different levels of comprehension.’

Weinfeld is refreshingly free from an architect’s arrogance. ‘I don’t have my ego in the clouds,’ he says, ‘I just want to be able to stay quietly in my beach house and at home in Brazil, and not travel too much.’ Unless, of course, it’s for Radiohead.

Gadget Shop plans to relaunch on the high street