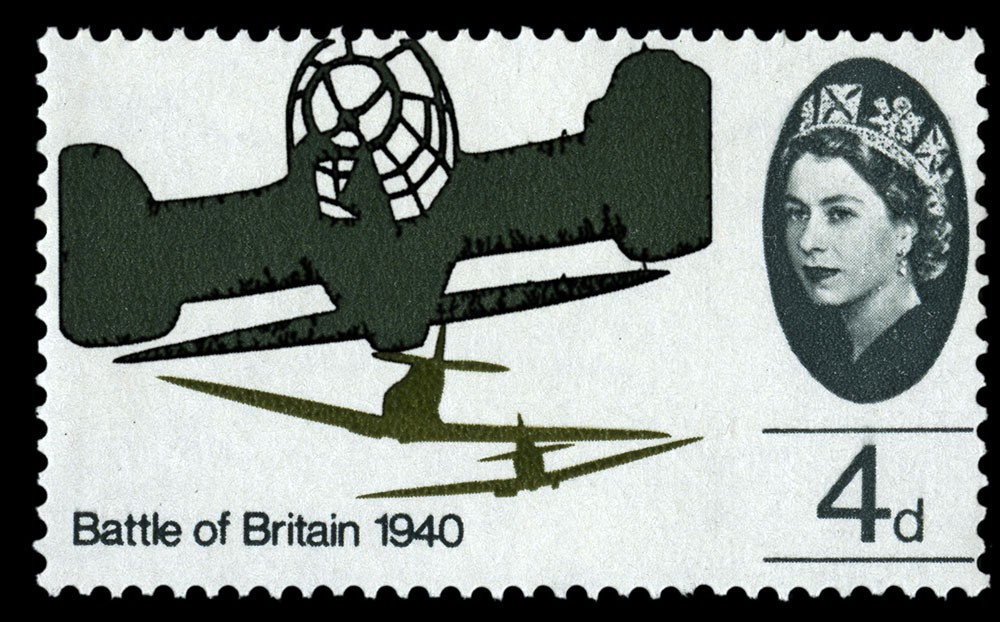 1965: 25th Anniversary of the Battle of Britain

This is a really early example of David Gentleman’s skill at designing tiny pieces of gummed paper. The way that the aeroplanes criss-cross and the colours overlap, and the depth of the compositions is world-class. Stamps had never looked like this before. 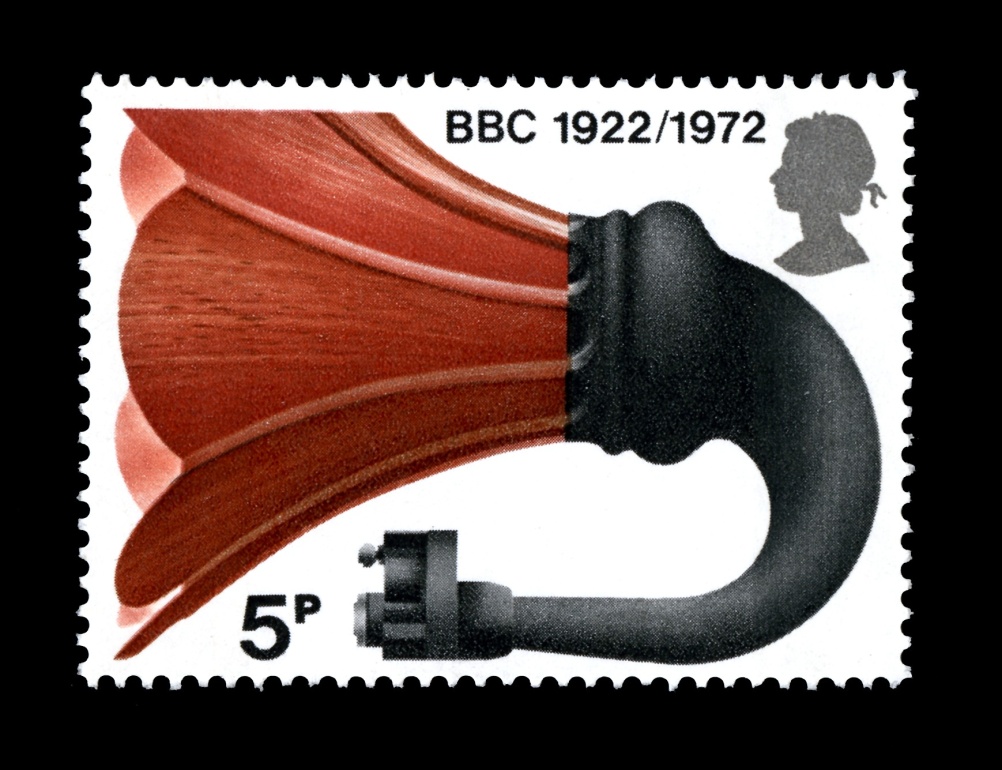 Another David Gentleman one – I’ve always thought this was a masterful piece of cropping with regards to the image, and such a singular object to feature on a stamp. 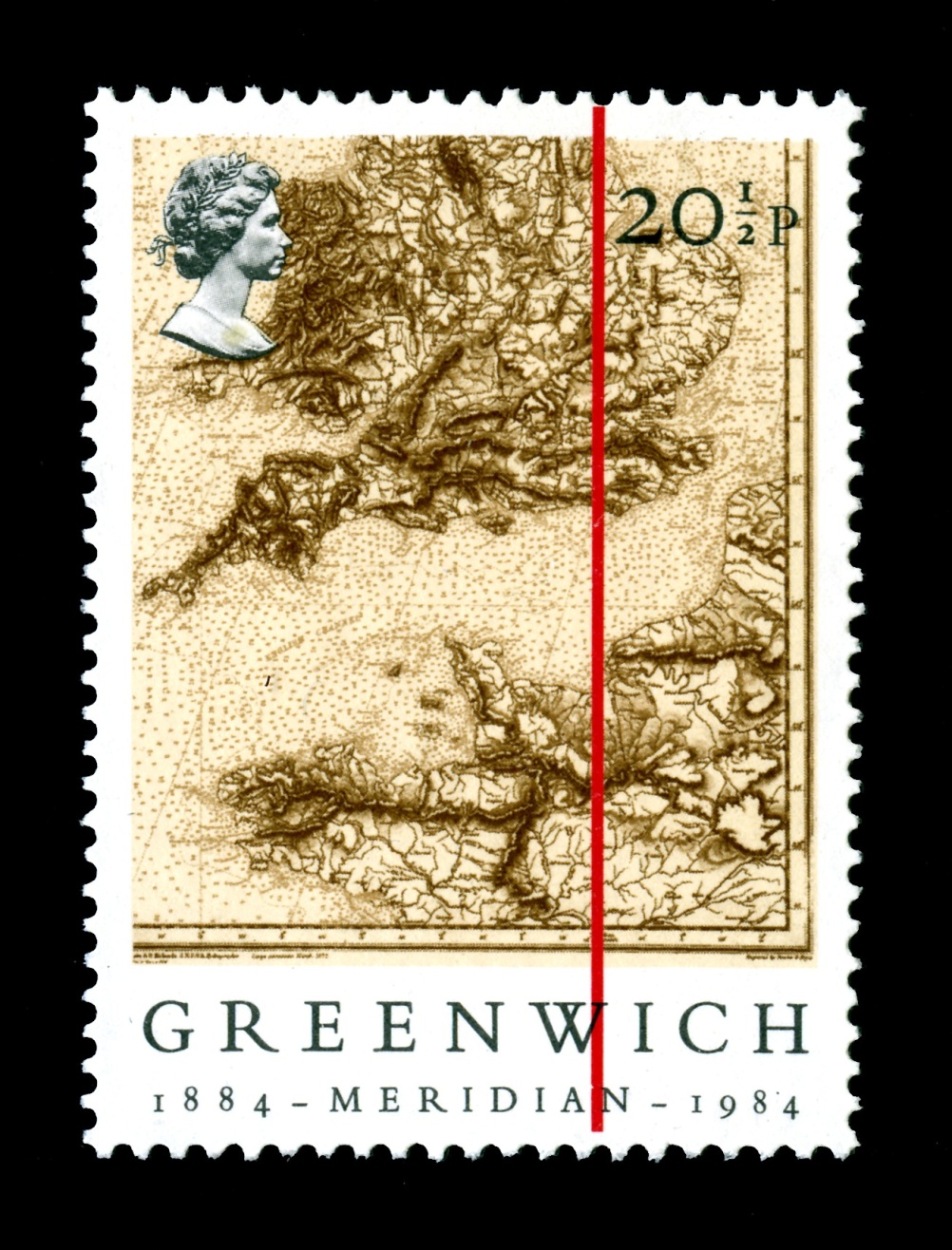 Howard Waller’s meridian stamps have a great “powers of ten” feel as we start hovering above the earth’s surface then progressively get closer to Greenwich. They have a great “found” design quality to them – the only unifying factor is the red line. 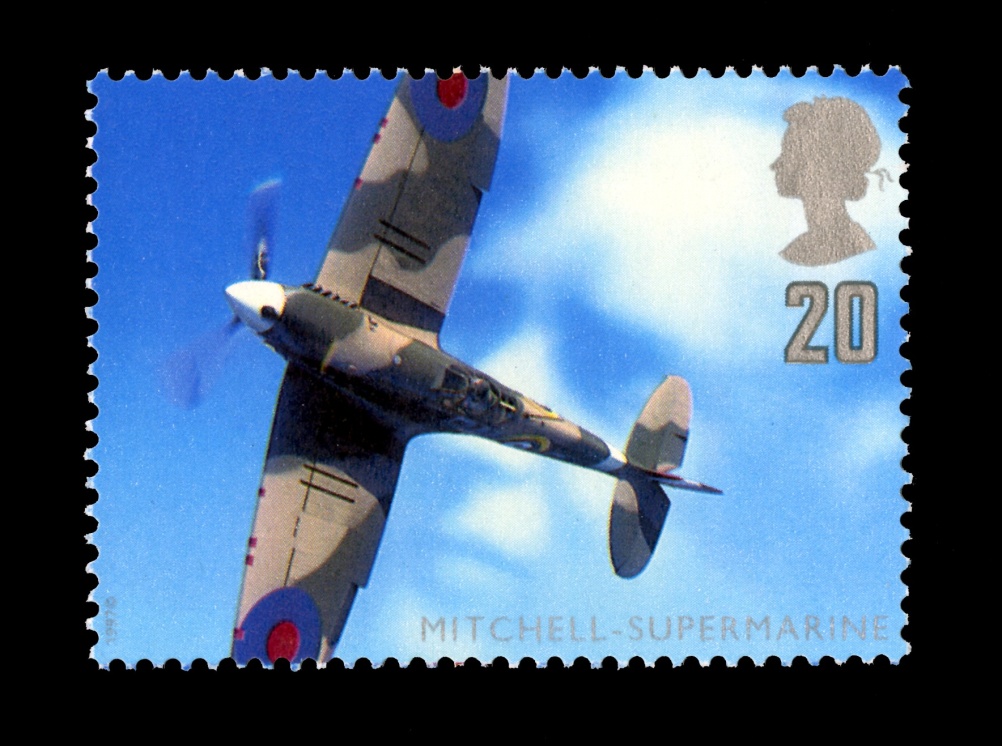 Bruce Duckworth’s “designers in the clouds” must count as one of the best trompe-l’oeils ever committed to a design this small. 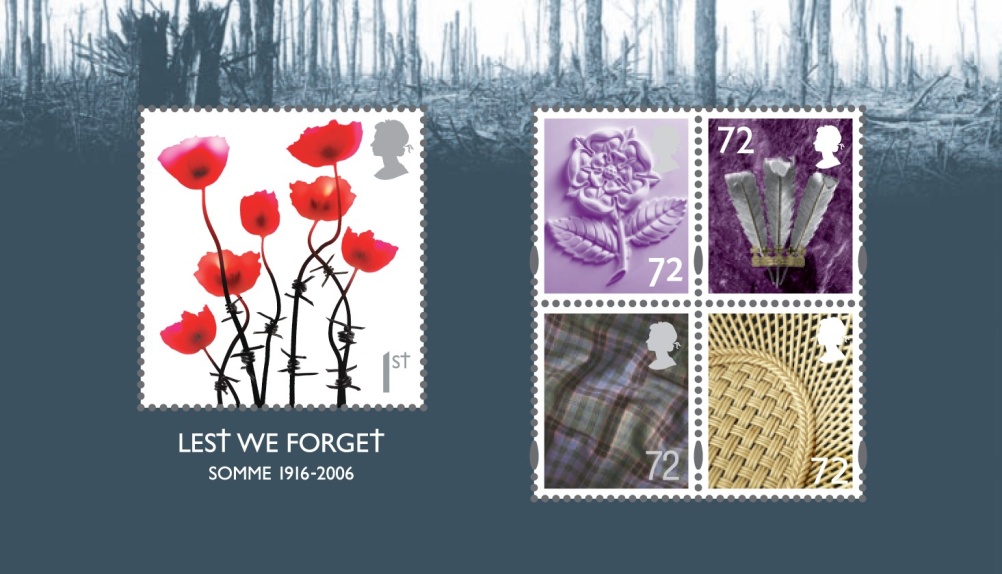 On balance I think there are probably too many war commemoration stamps and not enough forward thinking – but this fusion of barbed wire and the stems of poppies has always stood out for me. (Design: Hat-Trick).

It’s not the footballers, or the illustration that I love – it’s the genius of having 11 stamps in the set that gets me. (Design: True North).

Johnson has designed 46 stamps himself, including the Royal Mail’s Beatles set in 2007. 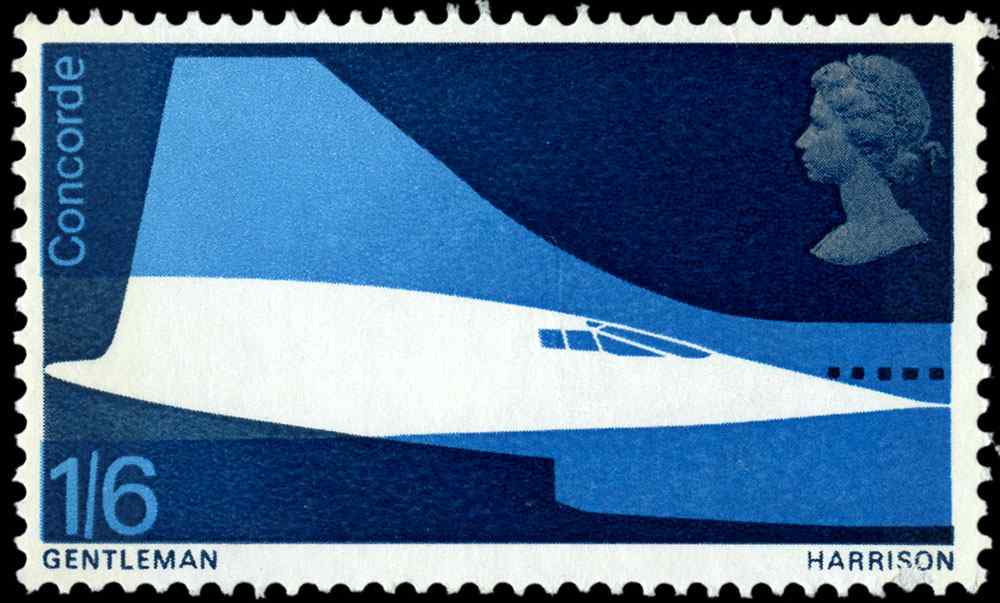 Marking the first flight of Concorde, this elegant David Gentleman design is probably the simplest artwork of all time. Two sheets of coloured film, spray painted, were cut with a scalpel to form the instantly recognisable profile. Over five decades Gentleman has designed more than 100 Special Stamps, his work always distinctive. 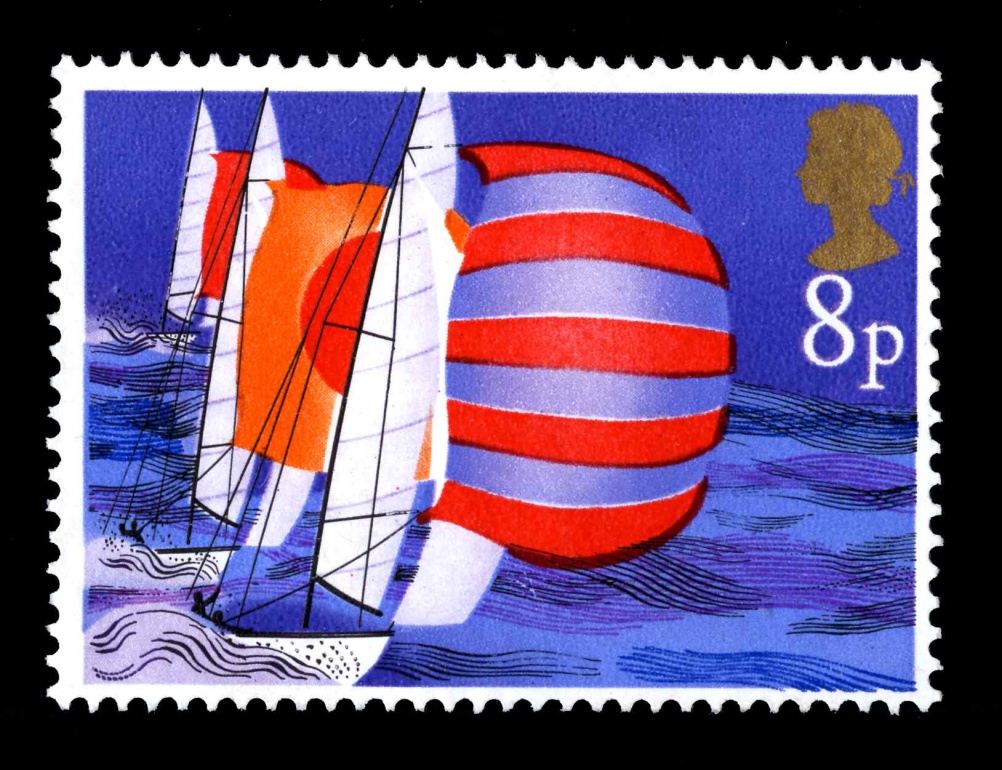 It was purely coincidental that Andrew Restall’s designs overlapped with Rod Stewart’s chart hit of the same name. Nothing as colourful, as “loose” (and perhaps as joyous) had been seen on stamps before. Restall’s major contribution to stamps included his Fellowship in Stamp Design at the RCA (instigated by Tony Benn). 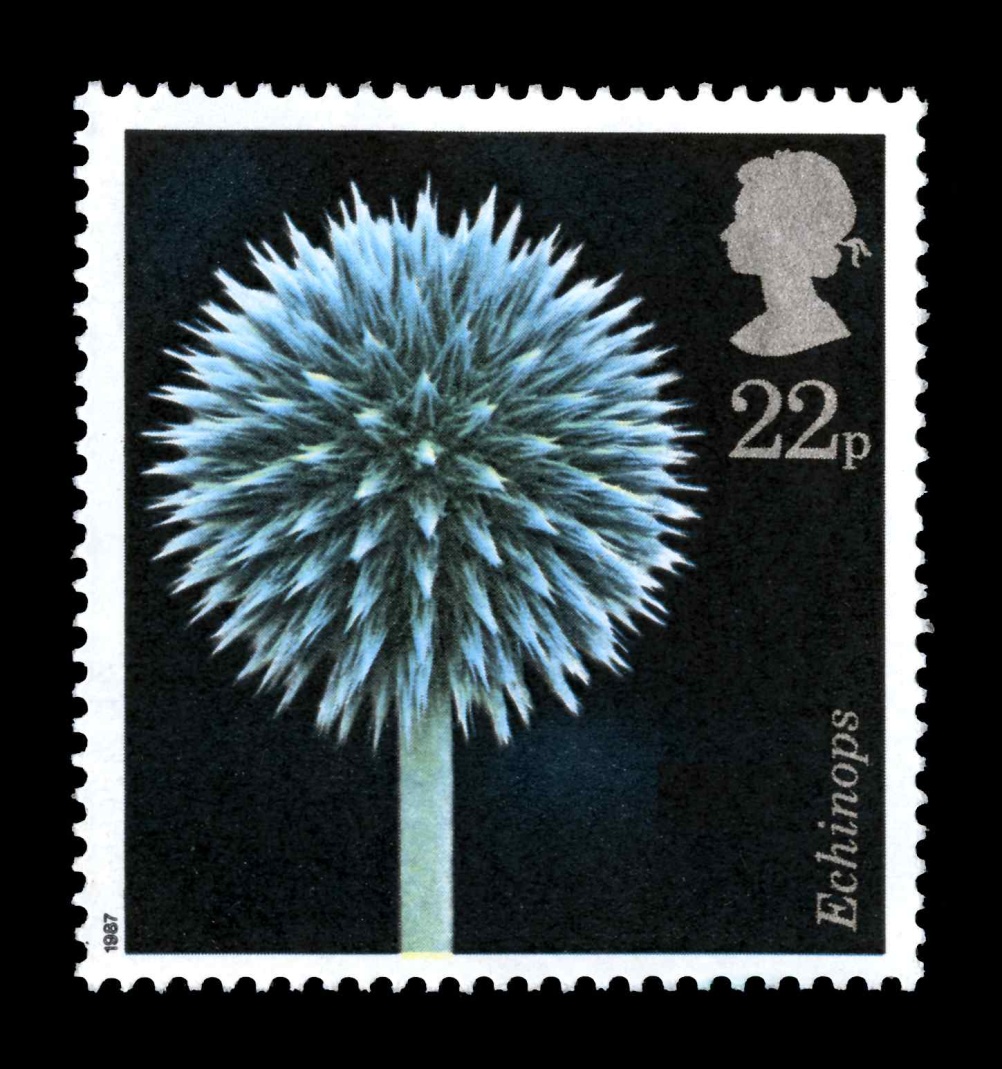 Stamps have been a vehicle for leading photographers and Alfred Lammer created what I consider to be some of the most beautiful stamps ever. Using only natural light and shooting flowers in situ, he would wait for hours before the conditions were right for a shot. The stamps were a feature of his newspaper obituaries when he died in 2000. 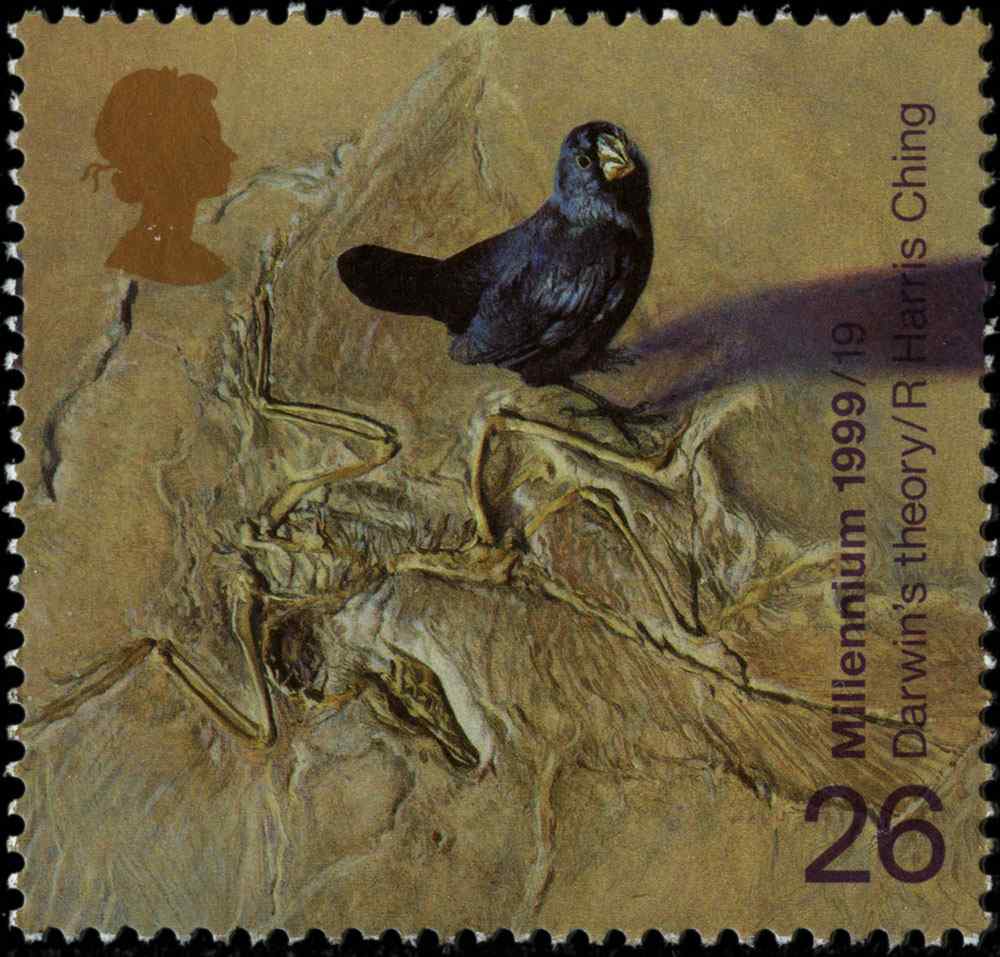 The Millennium Stamps were Royal Mail’s most ambitious programme, with every issue of 1999 exploring 1000 years of history with 48 leading image-makers contributing. Ray Harris-Ching is a wildlife artist like no other, meticulously painting mostly birds, and is somehow able to give each an individual character. His ingenious interpretation of Darwin’s theory of evolution placed a Galapagos Finch on the fossil of the first known bird. 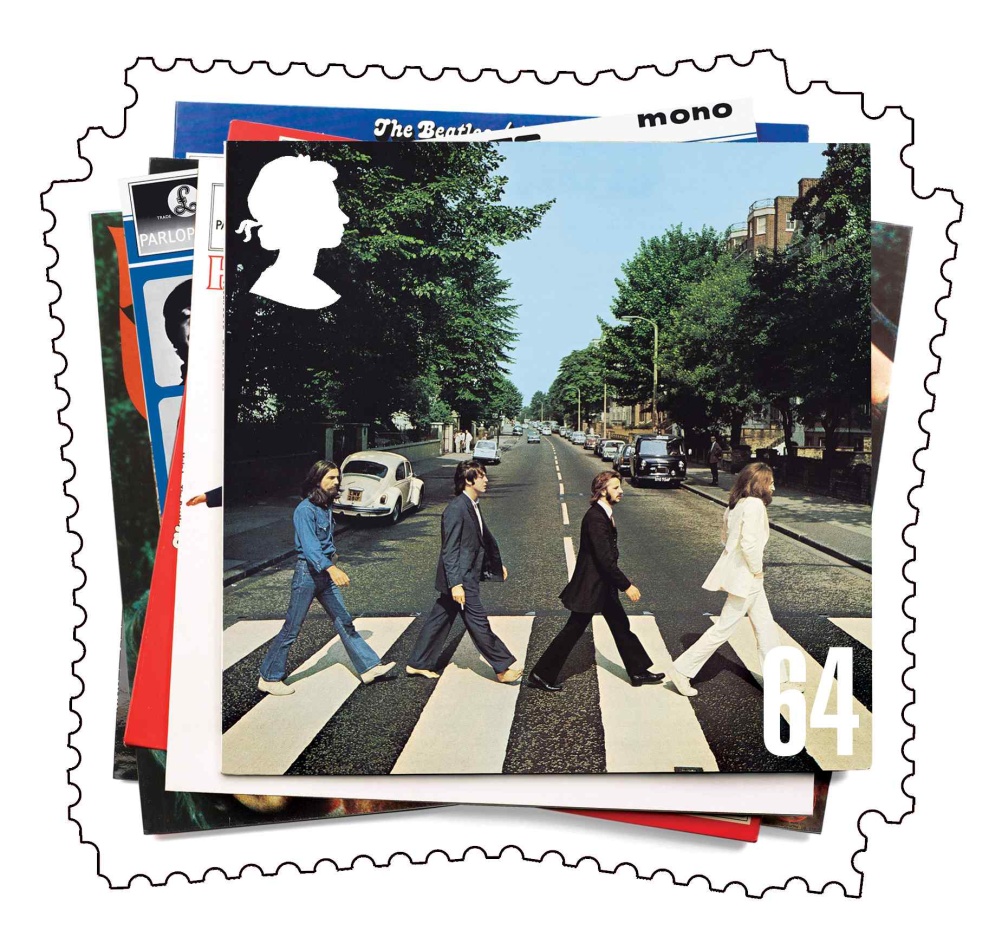 Perhaps not surprisingly, The Beatles stamps of 2007 are Royal Mail’s biggest selling issue of the last decade. It’s also notable for its depiction of living people. Before 2007, identifiable living people other than members of the Royal Family had hardly ever been seen on stamps. Designed by Johnson Banks, the stamp’s irregular shape is created by an image of the band’s iconic album stacked on top of a pile of LPs – I enjoy identifying the hidden albums. 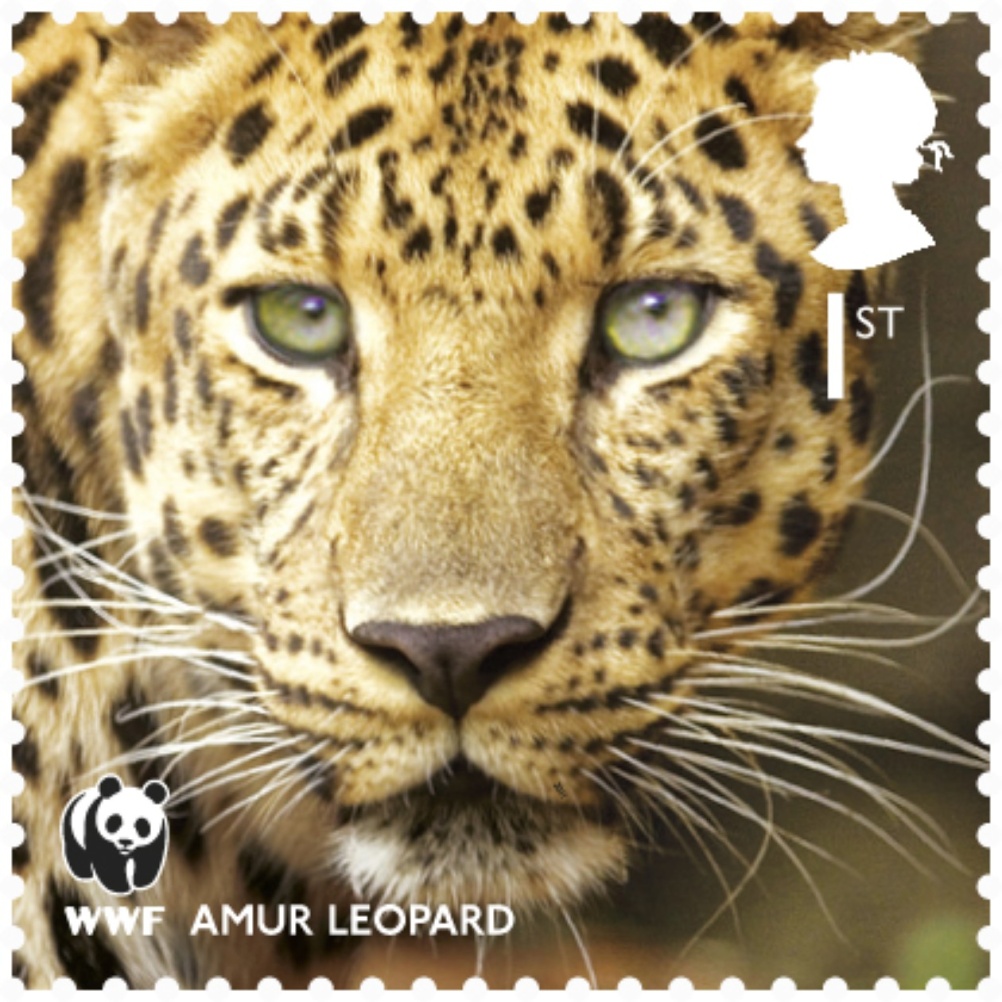 Stamps to mark the conservation group’s 50th anniversary included ten close-cropped images of the faces of endangered species. It’s incredibly hard to select one, but the Amur Leopard is striking and beautiful. Designed by Rose, the simple idea of the creature gazing straight out at you is effective – the fact that there are less than 40 left in the wild is sobering. 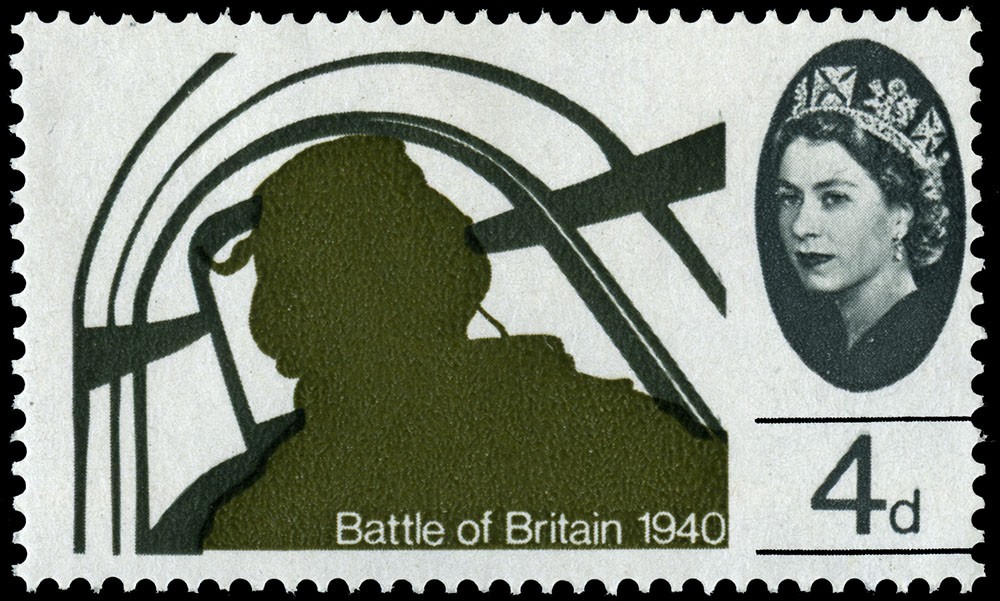 1965: 25th Anniversary of The Battle of Britain

It’s not only the bold design of this set, particularly those created by David Gentlemen, which I like – it also reminds me of the battle going on behind the scenes as Tony Benn, the then-postmaster general, and David Gentleman campaigned to have the Queen’s head removed from British stamp design. They didn’t succeed! 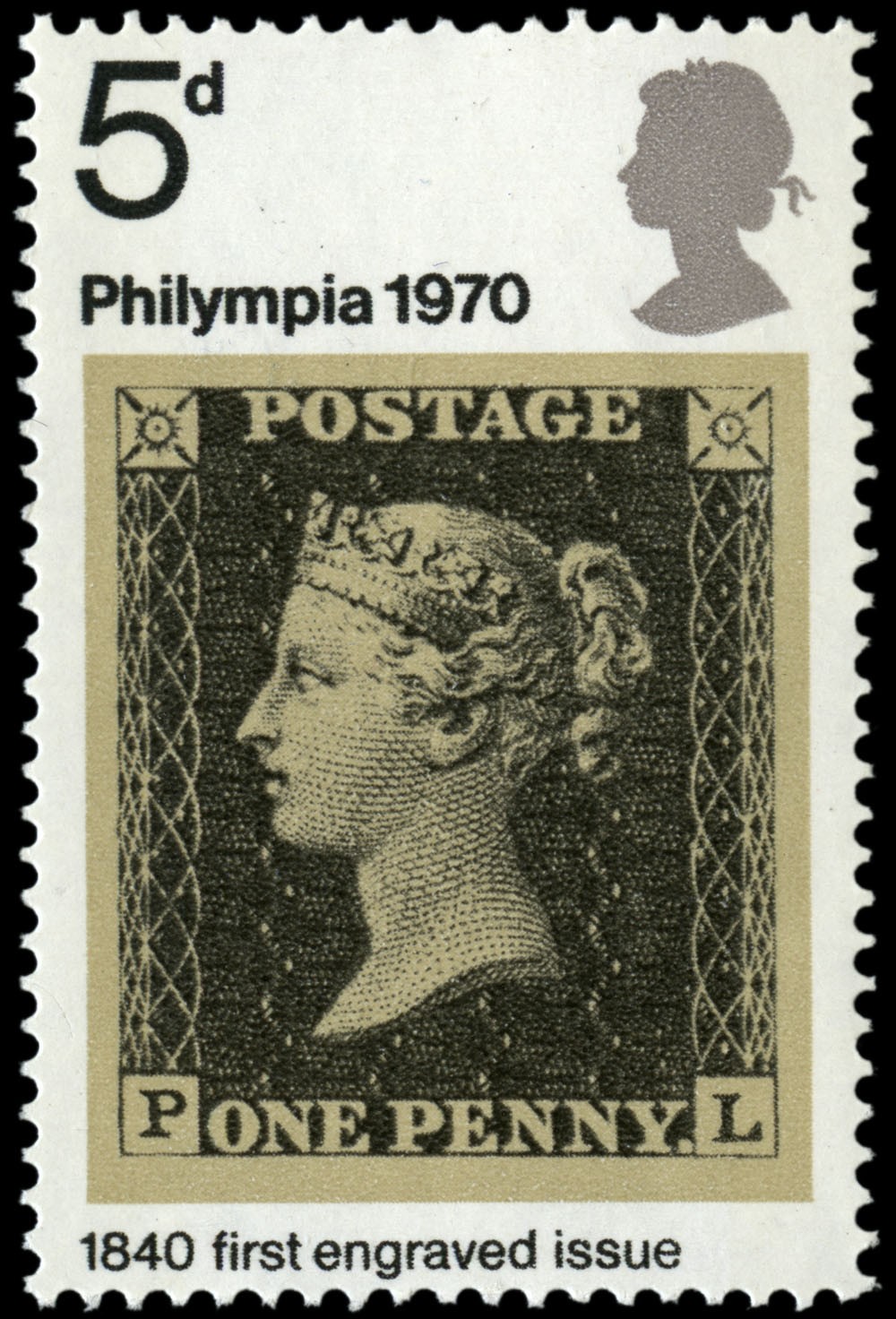 Stamp-on-stamp designs are very popular and this David Gentleman one, issued to commemorate the Philympia stamp exhibition in 1970, is one of the best. It showcases three ground-breaking issues of the Victorian era: the first line-engraved stamp (the famous Penny Black of 1840); the first embossed stamp (the One Shilling Green of 1847) and the first surface printed stamp (the Fourpence Carmine from 1885), to give a wonderful timeline of this pioneering era of stamp design. 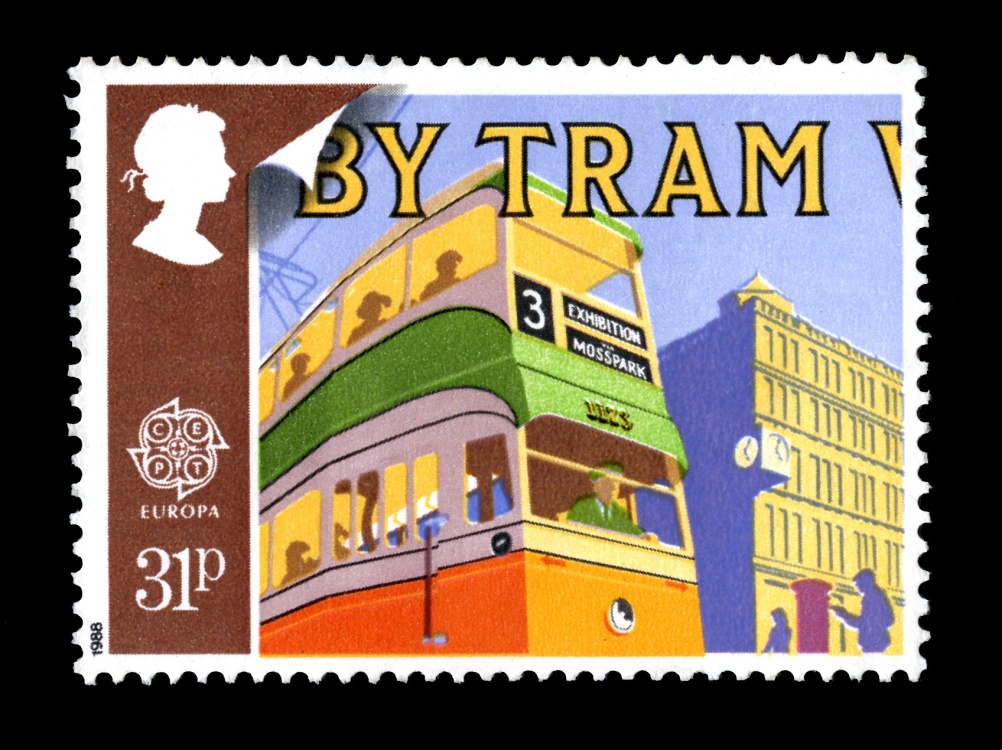 This set issued for the 1988 Europa competition and designed by Mike Dempsey recreates the look of those superb art deco-style posters of the 1930s, as well as the distinctive architecture and engineering masterpieces of the era. The fact that each mode of transport shown on the stamps has a link to the postal service is an added bonus. 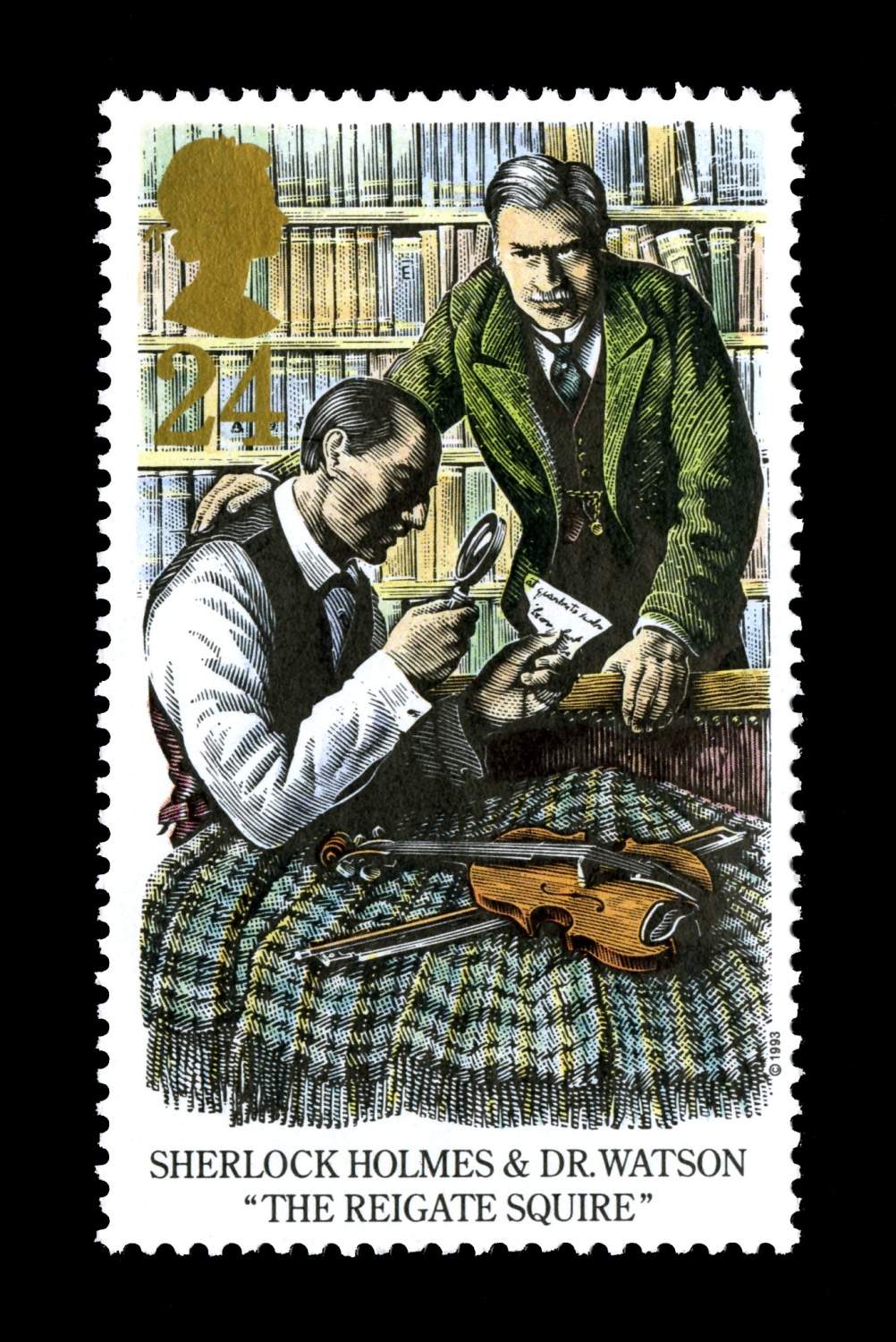 1993: Sherlock Holmes (centenary of the publication of The Final Problem)

I really admire the artwork of Andrew Davidson. His distinctive designs used for this issue, marking the centenary of the death of the Sherlock Holmes character, are excellent and the elongated format of the stamps adds to the appeal. Plus, as each stamp features a hidden letter that spells out a word related to Sherlock Holmes, viewers have to get out their magnifying glasses and do a little bit of detective work of their own. 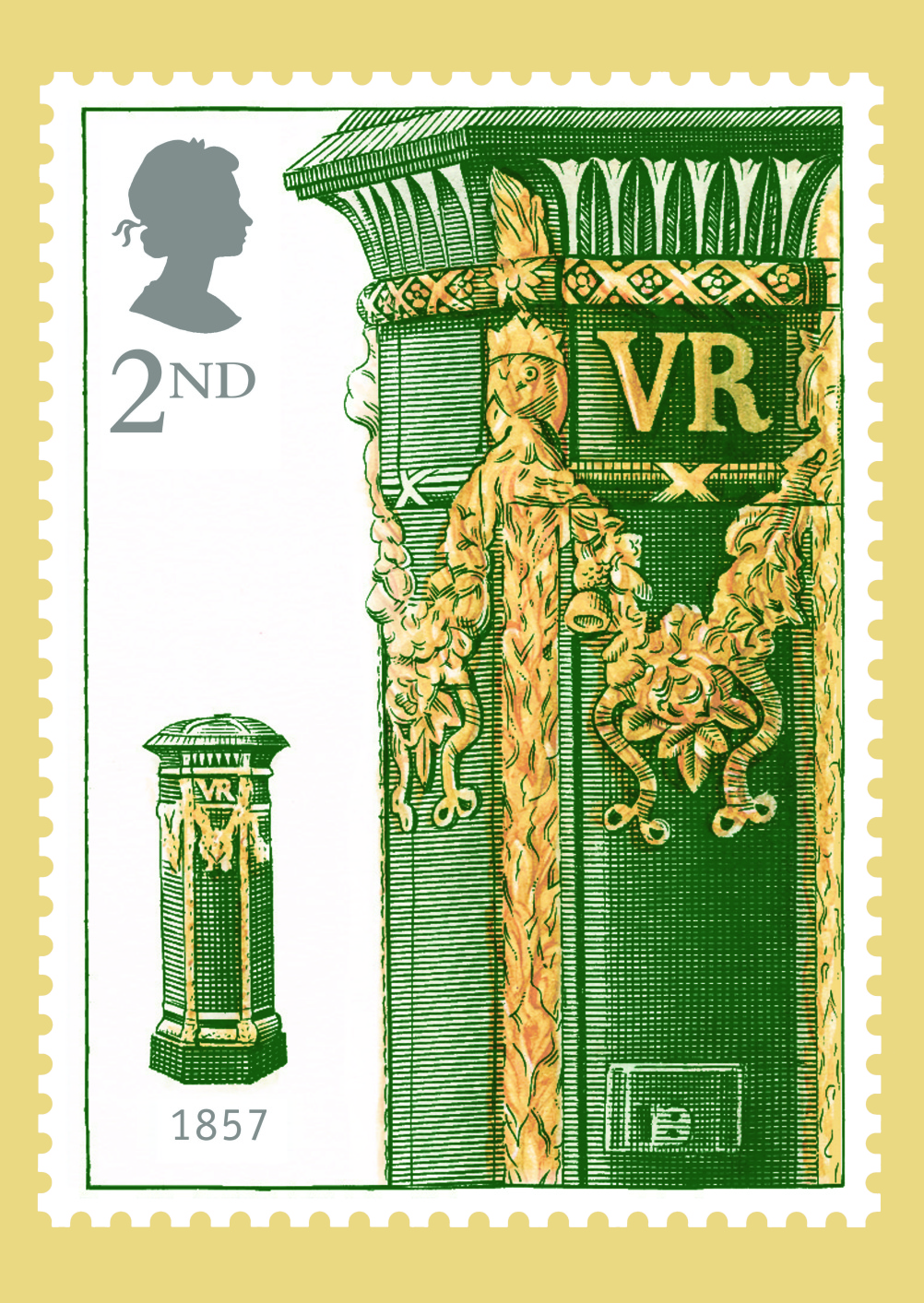 Designed by Silk Pearce, not only does this set show the evolution of the pillar box over the years but as the stamps were engraved and recess printed they have a wonderful texture to them that was lost to most stamps of the era. This is also my favourite as the engravings were done by the legendary Czeslaw Slania – arguably the best stamp engraver of all time. 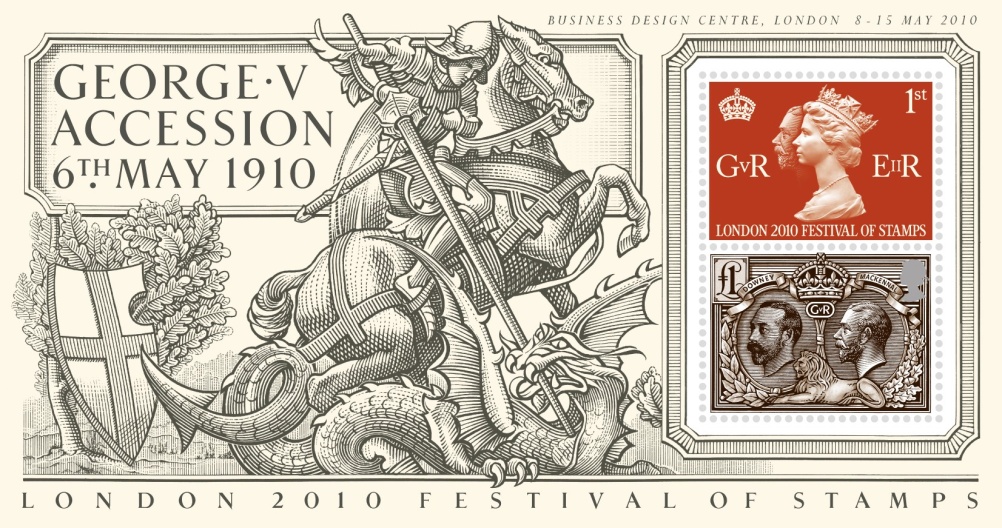 2010: Centenary of the Accession of King George V

This is by far my favourite stamp of the decade as it celebrates some of the most attractive British stamps ever created – in particular the high value Seahorse design by Bertram Mackennal. This is regarded by many, including myself, as Britain’s most beautiful stamp.

All images are courtesy of the Royal Mail.