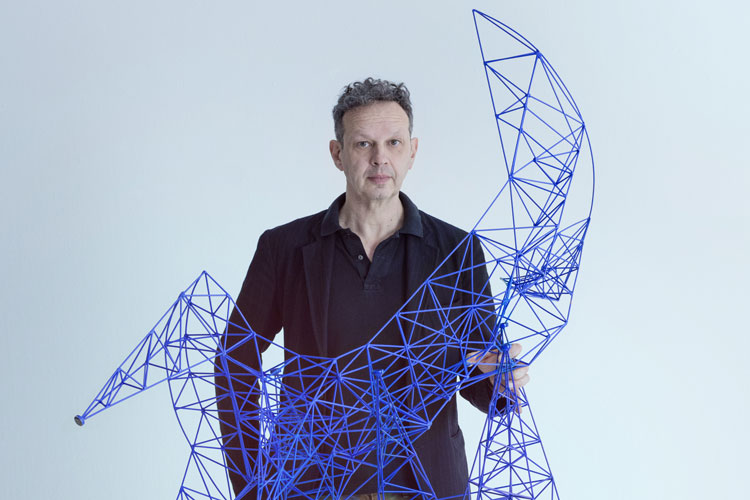 Tom Dixon, founder at his self-named furniture design studio, has made a brand for himself selling everything from lighting to chairs and stationery. Speaking with Design Week at Design Indaba, he tells us about how he got to where he is without a degree, his thoughts on luxury and affordable furniture and the problems he has with design education today.

Unlike so many successful British designers we know today, Tom Dixon did not graduate from the Royal College of Art (RCA) – or any college of art, for that matter. Dixon, founder at his own design studio and former creative director at Habitat, got to where he is today without a design degree.

“I never had an ambition to be a designer”

Now, 16 years after he launched his self-named Tom Dixon Studio in London, which sells everything from lighting to furniture and home accessories, he speaks at the Design Indaba conference in Cape Town, South Africa. Speaking to Design Week just before his talk, the product and industrial designer’s dry sense of humour, honesty and pragmatism is very apparent.

“I never had an ambition to be a designer,” he says. “I tried art school, then I had a motorbike crash and I never went back. I like making and repairing things, I always have – but the design thing crept up on me.”

It seems it had been creeping up on 58-year-old Dixon from quite an early age. He first started making and crafting when he was just 13, while at Holland Park Comprehensive school in West London, by taking part in as many pottery and life drawing classes as he could. Technically, only sixth formers (students aged over 16) were allowed to draw people in the nude, but Dixon says he used to “sneak in and sketch” anyway.

“I was at a pretty shitty school – but it had an amazing ceramics department,” he says. “I really took to converting raw material into something of value. In hindsight, that’s probably made the difference to my career.”

Aged 18, he left school and tried his hand at art college, completing six months at Chelsea School of Art. After breaking his leg in a motorcycle accident, he decided not to go back because it “hadn’t agreed with him at all”.

He soon found out his creativity was not restricted to his pencil or pottery wheel. Taking a musical interlude from craft, he spent two years as the bassist in a funk-disco band called Funkapolitan, signing a record deal and went on tour as a support act for the likes of Simple Minds and The Clash.

Teaching Thomas Heatherwick to weld in a car-repair shop 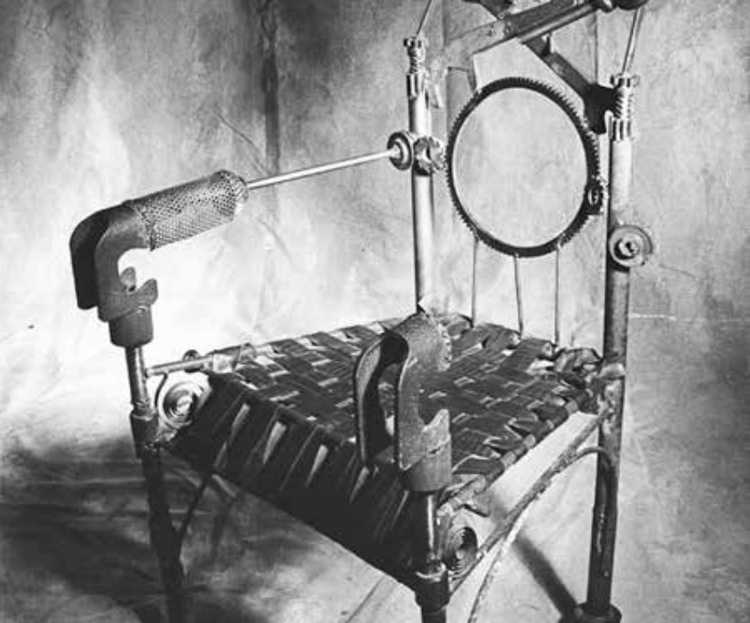 But a second motorcycle accident left Dixon with a broken arm, meaning he could no longer strum the bass and had to move on yet again. He had another two-year stint managing and running nightclubs, when, aged 24, an encounter with a friend who owned a car-repair shop in Clapham, South London changed his career path forever.

Learning the craft of welding – or oxy-acetylene welding, more specifically – Dixon began making metal chairs and other furniture from whatever junk and spare-part objects he could find. Within a year, he had made over 100 peculiar and misshapen chairs, and began his own welding studio from South London where the likes of Thomas Heatherwick learnt the craft from him.

Dixon continued through much of the 1980s and 1990s making radical, hand-crafted furniture, before turning to the corporate side in 1998 when he became head of design, then later creative director, of global retail brand Habitat. And while he did not have a traditional education, he says that working at the furniture giant taught him much of what he now knows about running a design business.

“Being at Habitat really was like university, in a way,” Dixon says. “It taught me everything about what goes alongside design to deliver it. “Making something isn’t enough – it’s also getting that furniture at a price where people will pay for it; looking at what your competition is doing; thinking about how much things cost and who will buy it; then dealing with the consequences of your designing.

Perhaps it is this hands-on way of learning, his eclectic and unique creative career path and his personally-motivated self-training that has left him so discerning of design education on a whole.

“There are lot of skills that are not being taught particularly well at university that people need to have in their toolbox right now,” he says. “Software and computer skills, engineering, model-making, pattern-cutting, and the rest of it. You can do a YouTube course to learn those things if you really want to.

“Design education is broad and shallow”

“I think design education has been set up these days to train lots of people in a very broad and shallow way, with a lot of conceptual thinking, and I don’t think it’s that useful,” he adds. “Despite the number of graduates coming out of university every year, it’s quite difficult to find skilled designers who really understand how the industry works.”

During his stint at Habitat, Dixon was slowly developing and establishing his own furniture and product design business. Officially opening Tom Dixon Studio in London 2002, the company launched with a range of furniture made from extruded plastic, where raw plastic is melted then moulded into a particular shape in one, continuous piece. The result was a series of uniquely shaped chairs and other furniture with a wire aesthetic.

Then, in 2003, Dixon established the Design Research Studio; the arm of his practice dedicated to designing interiors, installations and architectural displays, broadening out the designer’s work even further.

“I find designer a useless word”

The wide scope of his projects has no doubt left Dixon skeptical of niche and narrow design training and disciplines; plus, it would seem his experience as a start-up business owner has led him to think that “designers” cannot be restricted to just making.

“Generally, I find ‘designer’ such a useless word,” he says. “It doesn’t cover some of the activities I do on a day-to-day basis, like communication, engineering, commerce or entrepreneurialism. I’m perfectly happy to be one – I’m just not really sure what it means.”

Perhaps having a wider view on the role of the designer has also led him to consider the world around him a bit more astutely. Given that he started off his furniture-making career welding together disused pieces of forgotten objects into new ones, it is not surprising he takes an opinion on the environmental impact of being a product designer, and putting objects out into the world.

“It’s not just designers who need to be responsible about this, it’s everybody,” he says. “We all need to be more considered about our purchase choices and how we consume things. [At Tom Dixon Studio], we do try to make things that will have a long life. We’re lucky to be in a field where this is possible, compared to the likes of consumer electronics or single-use drinks cans.”

Testament to the longevity of his work, Dixon says he has seen his work pop up years later in new forms – “at auctions, on eBay and even at car-boot sales.”

Collaboration with Ikea to “change perceptions”

“Longevity is probably the most realistic hope you can have as a product designer,” he says. “Things will come back for many generations if they’re properly made and desirable enough not to get thrown away.”

Of course, this longevity does not come cheap. Designer brands such as Tom Dixon, alongside the likes of Barber & Osgerby and Vitra, have thought, time and considered ergonomic design poured into their products, pushing the price up compared to regular high-street brands. Inevitably, cheaper brands and companies end up inspired by these high-end designs, duplicating their style, and offering much more affordable alternatives to furniture-buyers.

So, it was after Dixon realised last year that budget furniture brand Ikea had produced a series of lamps that bore a resemblance to a range he had previously designed, that he decided to work with the company on a collaborative product – a foldable, sofa-turned-bed.

“At only £18 on Ikea, the lamps were quite a bargain,” he says, rather tongue-in-cheek. “I thought, well if you can’t beat them, then join them. I have a lot of respect for Ikea, they’re the leader in affordable design. So I approached them and now we’re working on a product that I hope will change the perception that Ikea products are disposable, and will also liberate this kind of furniture for a whole new community of people.”

“I’m not stuck in luxury design”

He adds that, having worked across a whole spectrum of scale from producing things “in ones with his own hands” through to mass-produced work with Ikea, consumers cannot expect a truly low price from unique, hand-crafted design.

“I’m not stuck in one mode of luxury designing,” he adds. “I’m really interested in the democratic element of furniture – but I’m also very aware that you can’t make things in small quantities and expect them to be cheap. The way you get cheap is through super-mass production.”

However, as new technology becomes more commonplace, price points do drop. One “little obsession” he has held while running his own studio is with the development of lighting, and lightbulbs in particular.

“It’s an exciting time for lighting”

“Lighting is in full technological evolution with the likes of energy-saving LEDs and OLEDs which have made a huge difference to energy consumption,” he says. “In the last five years, those bulbs have gone from being £20 to £2 each. It’s an exciting time.”

So, what next for Tom Dixon Studio? As Dixon works on the Delaktig sofa-bed range with Ikea, the studio is also gearing up for its big move from Portobello Dock in West London to King’s Cross this March, which will place it in North London’s new design, craft and cultural hub Coal Drops Yard. In the meantime, Dixon is travelling the world for various conferences and product launches to take full advantage of the studio’s now-global scale.

“We sell in 65 countries now,” he says. “So Cape Town was just the beginning of my trip – I’m heading to Singapore, Reykjavik, Lima, Casablanca and more to go on an adventure. The modern way to do well as a furniture brand is really to make use of your network.”

Design Indaba took place 21-23 February 2018 at the Artscape in Cape Town, South Africa. For more information on the festival and this year’s speakers, head here, and look out for Design Week’s coverage on the event over the next two weeks.