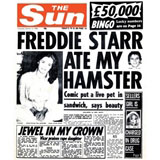 Love it or loathe it, The Sun’s distinctive design and high-impact headlines have captured some of Britain’s defining moments. John Stones reflects on some of the tabloid’s most memorable front pages

Mention you are a journalist, and, most likely, the sneering response will be, ‘for The Sun?’ Not only has Britain’s biggest-selling daily newspaper impacted (tarnished, many would say) perceptions of a whole profession since its launch in 1969, but it’s uniquely ferocious style and right-wing, populist humour have managed to colour perceptions of British people around the world. The stereotype of the Old Etonian fop quickly morphed into the lager-toting football thug.

In the main, The Sun’s success is down to the editorial staff – in particular the sub-editors – who have created a tabloid idiom that has hypostatised a particular kind of Essex English in potent and often funny ways. But, as examples of editorial design, the vividness of the pages is breathtaking, particularly with the passage of time.

Like The Sun’s journalism, behind the seeming crude approach of its design lies talent that is quite daunting. How else can you account for the fact that something as ephemeral as a front page of a daily newspaper can be instantly memorable decades later, a skill no doubt that many design and advertising creatives would kill for. Take ‘Up yours Delors’ (1990), which single-handedly captures a decade-long hysteric Eurosceptic tone in British politics. Or ‘Freddie Starr ate my hamster’ (1986), which has wheedled its way into folklore. Of course, sometimes memory can lead you astray. The greatest Sun headline of all time, ‘Kill an Argie and win a Metro’, was actually a spoof headline from Private Eye. Erstwhile editor Kelvin McKenzie (now chairman of marketing services group Media Square) was involved in the putting together of this show of front covers in London’s Camden, the once defiantly left-wing borough, relentlessly ridiculed by The Sun. As is now the custom, there is aggressive sponsorship from PG Tips (‘memorable moments’). But given The Sun’s pioneering of sponsorships and commercial tie-ups, it is less grating than usual.