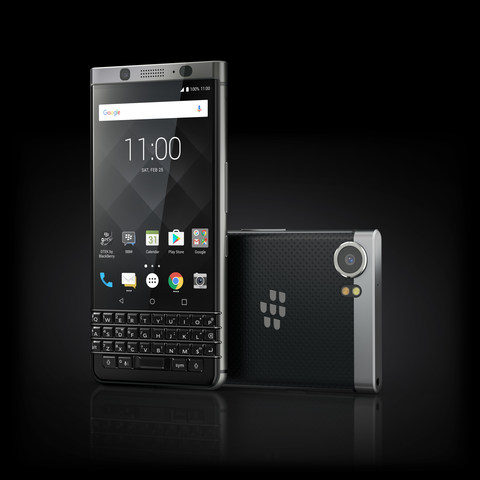 Blackberry has revealed a new keyboard smartphone, a few months after announcing its Blackberry Classic handset would be scrapped.

“More space for typing” than other smartphones

The Blackberry KeyOne has both a physical keyboard and a touchscreen, which aims to “give users more useable space for typing than a typical all-touch smartphone”, according to Blackberry’s manufacturer TCL Communication.

It will run on Android 7.1 software, has an aluminium frame with a softer back, and an 11.4cm screen.

The keyboard responds to touch gestures such as flicks as well as pressing, which aims to make browsing the internet, reading and writing emails more “intuitive”, says TCL Communication.

It can also be programmed with shortcuts, such as pressing “I” for inbox and “M” to access maps. The spacebar has a fingerprint sensor for security, in the same way as other touch smartphones.

Users download apps via the Google Play store, and feature Blackberry Hub enables users to group emails, texts and social media messages into one place, and also manage multiple email accounts in one app. The phone also offers users the security rating of their device and shows them how to improve it.

It comes with an improved battery life, faster file sharing and a quicker charge time, alongside a 12-megapixel back camera and eight-megapixel front camera.

The Blackberry KeyOne was revealed at Mobile World Congress (MWC) in Barcelona last week. It will be available worldwide from April this year, priced at £499.

The new phone launches following Blackberry’s announcement in July last year that it would discontinue its Classic model, which ran on the company’s own operating system Blackberry OS.

Blackberry announced a quarterly loss of £520 million in 2016

Blackberry launched its first smartphone in 1999. In 2013, there were 85 million Blackberry subscribers worldwide but within three years this had fallen to 23 million as more people chose smartphones that ran on iOS and Android software, according to the Guardian. In June 2016, Blackberry announced a quarterly loss of £520 million.