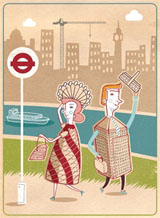 Designs commissioned by London Transport have massively influenced the capital’s identity, but recent architecture has added new icons to the mix. So it is only fitting that for this year’s Society of Artists’ Agents Illustration Awards, hosted by the London Transport Museum, the artists were briefed to capture the new skyline.

Foster and Partner’s Gherkin predictably dominates the artwork as much as it does London’s skyline. It makes a cameo presence in the work of winning artist, Ian Murray, which will now be used throughout the London Underground. Using a1950s idiom inspired by Alexander Calder, Barbara Hepworth and Lucienne and Robin Day, Murray’s intention was to capture some of that era’s optimism.

The runners-up, Joanna Attard and Tom Frost, adopt a very different, humorous style. Rachel Harper won the student category, the second Loughborough University graduate to do so in as many years. The submissions for the competition are on show at City Hall as the London Transport Museum’s Covent Garden home is still in the throes of a Ã‚Â£19m revamp, due to be completed next year. Its new guest curator, Conran Design Partnership managing director David Worthington, was on hand to present the prizes.