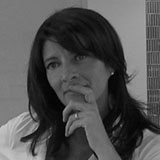 Italian furniture manufacturer Tacchini is about to launch its new range in the UK. Hannah Booth talks to Giusi Tacchini, who has been leading the company for over a decade, about its latest collaborations with designers

Giusi Tacchini doesn’t form professional relationships lightly. As head of family-run Italian furniture company Tacchini, she has to feel ‘a human affinity’ with anyone she decides to work with — all professional contracts, therefore, are bound by something stronger than signing on a dotted line. ‘It’s a state of mind,’ she says. ‘For me, how I react to someone and vice versa, is very important.’

This philosophy has just been tested again. In the 1990s, the young Giusi took over the running of Tacchini from her father, Antonio Tacchini (who is retired), along with her brother, Maurizio, who is in charge of prototyping. She quickly decided that a respected Italian manufacturer ought to design its own pieces, and started working with architect Pietro Arosio, whom she met through a personal contact. Other designers followed, including Lievore Altherr Molina and Roberto Grossi.

More recently, with an eye on international expansion and providing more serious competition for her rivals, she has entered into three new relationships with designers. The results were unveiled this year at Milan, ahead of Tacchini’s official UK launch this month and a presence at 100% Design in September. 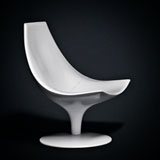 Tacchini chose to work with designers from Britain, Sweden and France – Pearson Lloyd, Monica Förster and Christophe Pillet respectively. All are clever, creative choices: Förster is a young star in Sweden; Pillet worked with Philippe Starck for five years, and is often hailed as his heir; and Pearson Lloyd is still at the younger, more avant-garde end of a slew of exceptionally talented Brits. Was it intentional? Did she want to introduce a non-Italian aesthetic to the proceedings?

‘It wasn’t planned,’ she insists. ‘I was attracted to all three by their talent. Then I met them and found I had a human affinity with them.’ Of course, Tacchini admits that international expansion is probably easier with internationally recognised designers. ‘Although nationality wasn’t important, we hope Pearson Lloyd’s, Förster’s and Pillet’s furniture will be seen worldwide, which shows that we value design from all over, not just Italy. We can boast that we’re “Made in Italy” – it doesn’t matter where the designers come from.’

The results marry classical Italian manufacturing with quirky touches: Förster has created a classic sofa with a twist — elegant pinstripe fabric. Pillet has designed an armchair for two people, called Uptown, aimed at the contract market, as well as a striking armchair from strips of birch wood, South Beach. And Pearson Lloyd has designed a modular public seating system inspired in form by icebergs, called Polar, and an unconventional, free-form monochrome table, Meniscus.

‘Polar allows people to sit together, or not,’ says Pearson Lloyd director Luke Pearson. ‘Strangers don’t generally want to sit close together in public spaces, but couples do.’ Polar and Meniscus are the first in a line of pieces for Tacchini, says Pearson. ‘We’re building up a collection, and are currently working on new pieces for Milan 2007,’ he says.

‘Tacchini came to see us last autumn. Giusi wanted to say an informal hello and find out a bit more about us. What attracted us was the fact that Tacchini is a family-run company – it’s better to work with, as the family makes decisions quickly – and Giusi’s energy and enthusiasm. She’s clear about what she likes, but is very open to discuss things.’

Pearson believes Tacchini sits at the top of the middle market, beneath ‘very, very expensive, high-end Italian manufacturers. It’s keenly priced.’ Giusi, by turn, says Tacchini sits at the top end of the market. ‘We have to be: we’re imported in many countries, such as the US, and we have to make it worth their while. Why would clients want to import lower quality furniture?’ 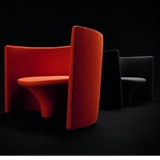 Wherever it sits in the market, Tacchini aims to produce furniture ‘away from the passing fashions of the time’, says Tacchini. ‘It’s a very different philosophy to, say, a company like Moroso. We want to create products with a soul, that will stand the test of time. To make a product just for the sake of it and follow the fashions of the time with products that project into an empty and ephemeral world – something that’s very common – doesn’t interest me.’

In the UK, it hopes to compete with the likes of Hitch Mylius, but its main competitors, here and abroad, will be Italian brands such as B&B Italia, Zanotta and Moroso, she says. Giusi believes working for the family firm only works ‘if you’re doing it for the love of it, not because you feel you have to’.