TGI Fridays, now Fridays, has been rebranded by London-based design studio SomeOne as it ventures into the home delivery market and makes a bid to become “famous again”.

The new identity includes a name change, updated logo as well as a new visual system for merchandise and packaging. 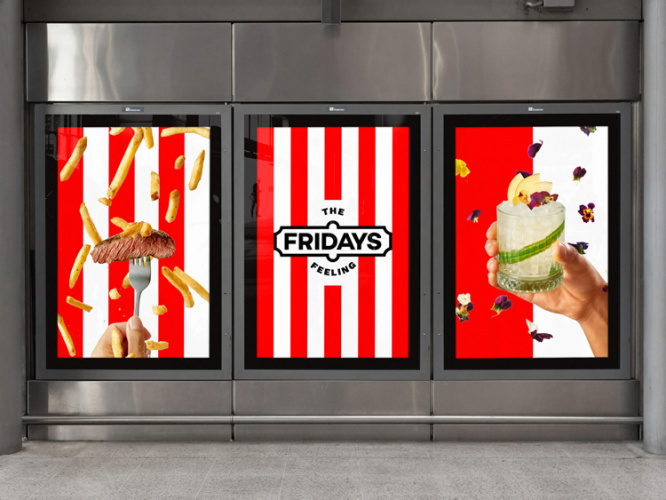 The hospitality chain was originally launched in New York, US in 1965. It became famous because of its extensive drinks menu. It also has somewhat of a cult status in America, as the rumoured inspiration for Tom Cruise’s bartender-business student character in the 1988 film Cocktail.

In recent years however, the brand language had become cluttered. SomeOne has worked to simplify the visual appearance, as well as breathe new life into the brand. Fridays CEO Robert B Cook says: “Our vision is to make Fridays famous again so we needed to breathe fresh life into the brand by relevantly leveraging the past.”

“It was time to be single-minded and confident” 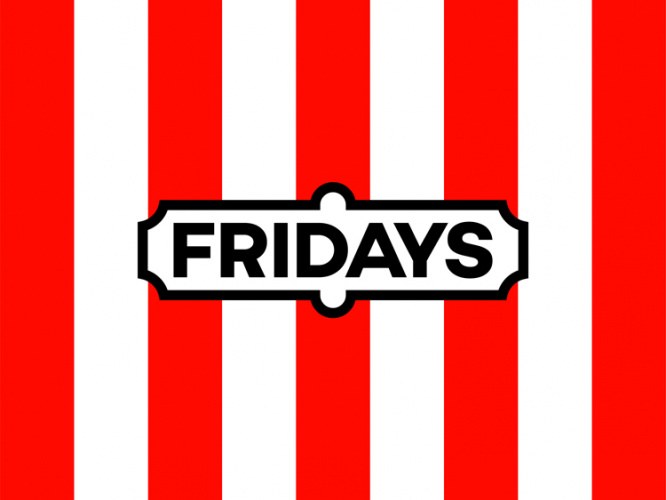 The most obvious part of the rebrand is the name change. The restaurant is now simply known as Fridays, dropping the TGI acronym (which stands for ‘Thank God it’s’). The prefix had become “lost and confused” according to SomeOne. “It was time to be single-minded and confident,” the studio adds.

SomeOne founder Gary Holt explains that the new name – which is “shorter, sharper and more contemporary” can be used more flexibly, especially in copy throughout the identity. 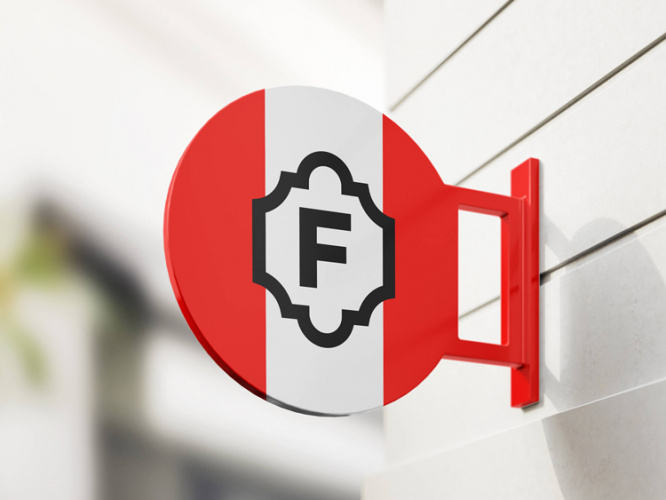 The most recognisable remaining element from the restaurant’s branding is its red-and-white colour scheme. This has been kept, though now the colours appears as vertical stripes rather than the diagonal varieties that had become part of the identity. These stripes – originally inspired by America’s Barnum and Bailey circuses – can be used as a “significant visual role or more of a subtle detail”.

The three main occasions that the brand is targeting are family meals, informal date nights, and girls’ nights out, SomeOne creative director Simon Manchipp tells Design Week. “For a generation over 30, Fridays occupies a special place in eharts and minds – the brand has just not given that audience a compelling reason to visit recently and our challenge was to change this.”

Tapping into the brand’s heritage 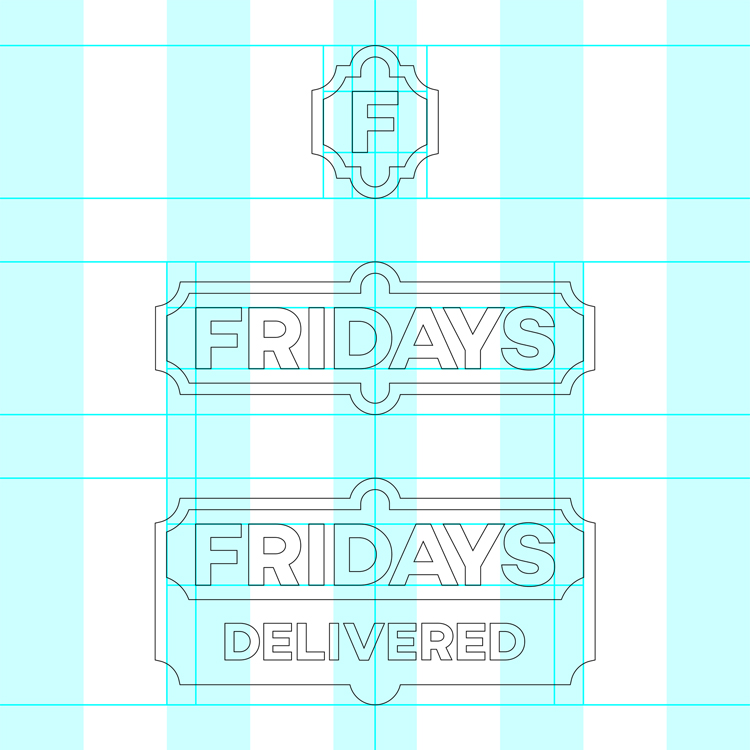 A return to the brand’s heritage has influenced another aspect of the rebrand: its logo. The team looked to the original signage for the restaurant and it was “reintroduced in a bold, simple and sophisticated way”, according to SomeOne. The logo can be reduced to an ‘F’ when it needs to be smaller.

Fridays has a “growing” number of digital services, according to the design studio, such as a ‘Click & Collect’ platform and home delivery. In light of COVID-19’s impact on the hospitality industry, such services are likely to become more relevant. SomeOne says that the visuals created for this developing part of the brand are “built to move and adapt”. Further extensions are planned for the autumn of 2020. 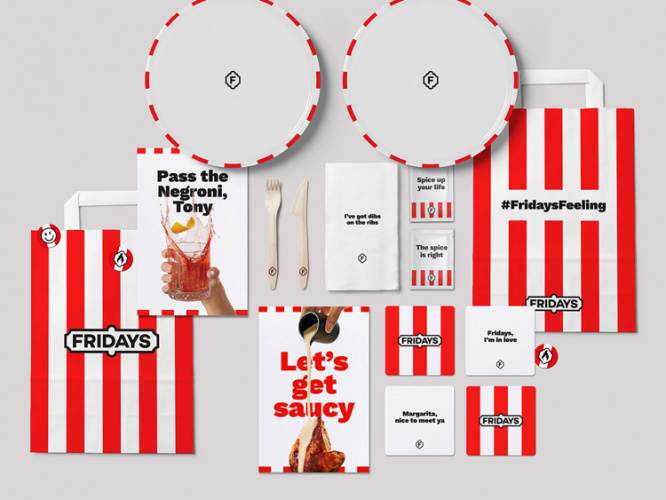 A more “playful” copy has been introduced for the brand’s tone of voice. This rolls out across a variety of platforms, from Instagram stories to traditional print campaigns. To match these, the studio developed a new photography style to “make the food and drink look as appealing (and tasty) as possible”. Hands have been included adds a “premium touch”, according to the design studio.

SomeOne designer Karina Stolf says: “We shot stills and videos to bring the food and drink to life – swirling Espresso Martinis, gently falling mint leaves and a deluge of fries. It all evokes the tone and theatre of the Fridays Experiences.” These moving images are part of the new digital focus. The identity also rolls out across takeaway packaging and signage, which varies by location. 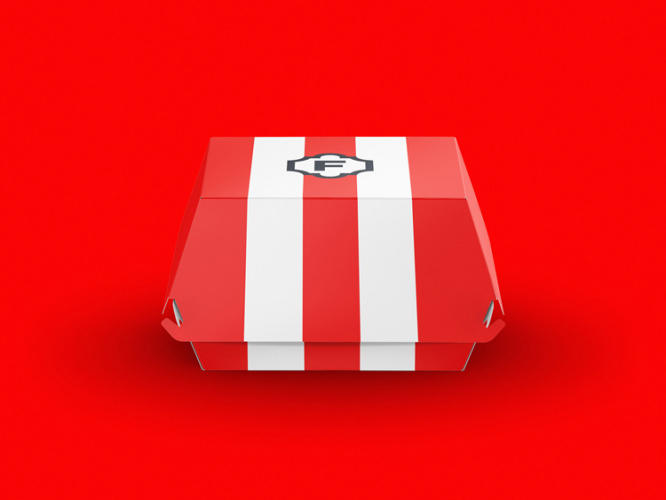