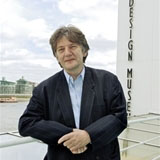 The incoming director of the Design Museum has relinquished rather a lot to occupy the vacant hot seat. Not only has he resigned as Dean of Kingston University’s art, design and architecture department, and shelved any plans he may have had to run another design festival, but he’s had to close the lid of his typewriter for the time being too. Like his predecessor, Alice Rawsthorn – now scribbling again for the International Herald Tribune – Deyan Sudjic (pictured) has jumped worlds.

There seems to be a tiny bit of regret in his voice about his departure from the hallowed halls of journalism, reaching titles such as The Observer, Domus and Blueprint. But no, he’s not going to miss it at all, he laughs.

‘I wrote my last column for The Observer last week,’ he says. ‘You can’t be a critic and the director of a design museum – there’s too much conflict of interest. But, to be honest, I’ve no regrets in that department. As a journalist, you can often get to thinking that you’re making great strides in the world, when in fact all you’re often doing is hitting deadlines.’

Over the last few weeks he must have had plenty of time to think about the world he is entering, with its thrusting politics and strident personalities. Sensibly, Sudjic has been easing himself in early, ahead of his formal accession this week, for there is much to be done ahead of the museum’s move to the Tate Modern development in time for 2012. Even so, he is cautious about revealing his hand too soon.

Sudjic says there is nothing fundamental that he plans to change right away. He will continue with the Designer of the Year, though he is ‘refining the format’, and describes his main objective as ‘maintaining the energy level’ established by Rawsthorn’s now infamous reign.

However, Sudjic is certainly not someone who has been employed to carry things on as before and, as he talks, it becomes clear that there are plenty of ideas brewing at Butler’s Wharf, which, all being well, will start to germinate fairly quickly.

‘Certainly, one of my main objectives now is to look at what ‘expanding’ means to the Design Museum. The model for design museums around the world was set out in the 1920s with the Museum of Modern Art (built in 1929 in New York City) and the integration of design with art and sculpture. But it’s time for things to move on,’ he says.

‘If design is as much about the process of creating something as it is about the end product, then there is still much to be done by museums to show and explain design processes. Part of our expansion plan is to try to show more of the layers of process and to share this experience with visitors to the museum,’ Sudjic continues.

It was Stephen Bayley, the museum’s founding director and his replacement on The Observer, who Sudjic credits with this simple insight about process over output. Bayley recalls that he had ‘the moment of post-existential clarity’ shortly after opening the museum in 1989.

‘It suddenly struck me,’ Bayley says, ‘that we’d spent all those years doing it – actually building the museum – and what we had to show for it was simply a collection of objects. It was rather a shock,’ he says.

‘Back in the 1980s, defining and showcasing design was much more straightforward than it is in today’s cultural landscape. The challenge for Deyan is to find a way of defining what design means nowadays, and to answer one question about the new museum – “Why go there?”‘

If the expansion of the museum goes ahead with a new site built adjacent to the Tate Modern, the museum’s trustees hope to capitalise on the captive audience from the Tate Modern’s own turnstiles. The idea both emulates and transcends the Moma model, which boasts a floor of design exhibits alongside its modern art collection, but which is very limited by space and has no permanent collection – a key plank for Design Museum Two. Another key aim will be to fully engage with the educational world, particularly at the postgraduate level.

Shortly after Sudjic’s appointment was announced in March, Moma design curator Paola Antonelli, herself tipped to get the London job, gave a glowing endorsement of her new contemporary. But what did she think about the decision to build a stand-alone museum next door to an art gallery? Will people go for it?

‘I’m sure they will,’ she says. ‘The thing about Europe is that the public has a much more sophisticated appetite for design than we do in the US. People have a better understanding of what design is and are hungry for it.’

‘In Europe,’ she adds, ‘there are design correspondents working for national newspapers – you just don’t really get them over here.’

Perhaps she should have added that most of them end up as director of a design museum too.

Directors of the Design Museum to date: