An interactive public art installation of animals will appear around the city of Bristol this autumn.

Urbanimals, designed by Poland-based creative group LAX – Laboratory for Architectural Experiments – includes animated dolphins, rabbits, kangaroos and beetles, which will be scattered around Bristol to encourage interaction with the city. 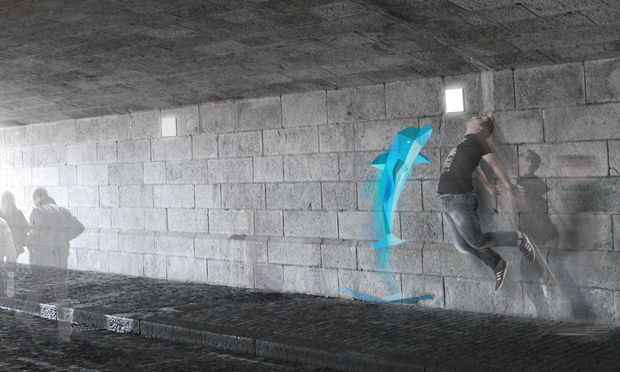 As people walk past or stop by the installations, the animals will be triggered into movement through the use of projectors and sensors.

Anna Grajper, co-founder at LAX, says: “We want to inspire residents to consider their environment in unexpected ways, stimulate their senses and inject excitement and wonder into the every day urban landscape.”

The installation was the winning application for Watershed’s Playable City Award 2015 – an international competition which invites artists and designers to propose an original piece of work based on the theme of the “playable city”.

Watershed – a Bristol-based creative social enterprise and charity – says this concept is about “generating a social dialogue by creating a shared experience through play”.

LAX, which has received a £30,000 prize to develop the Urbanimals concept, was one of 197 applications for the award, received from 60 countries.

“Urbanimals proposes a series of unexpected installations which are delightfully fun and engaging,” says Richard Roberts, member of the judging panel and design manager at Jason Bruges Studio. “The proposal allows many levels of interaction – from brief encounters by passive observers to active engagement over longer timeframes – and is open to be enjoyed by everyone.

“It was the positive impact that these pieces could make to everyday city journeys that won me over,” he says.

The installation will be based in Bristol throughout September and October this year. The number of animals that will be placed around the city is not yet confirmed.