Crystal brand Swarovski has updated its swan logo as part of a wider rebrand that includes 28 new immersive spaces around the world. 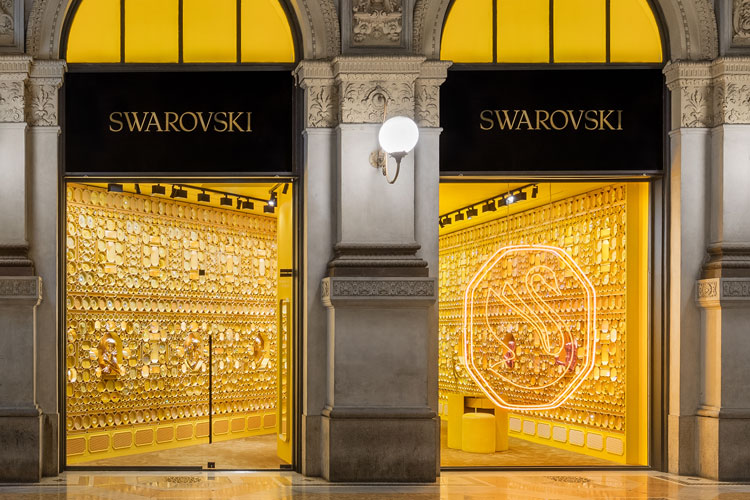 Swarovski was established in 1895 in Austria, where its headquarters are still located. It produces crystal glass, jewellery and a range of lifestyle accessories. In 2018, it had a revenue of approximately £2.3 billion.

The company’s CEO Robert Buchbauer says that Swarovski is “rooted in innovation and reinvention” and that the rebrand seeks to “meet the needs of an evolving world”. 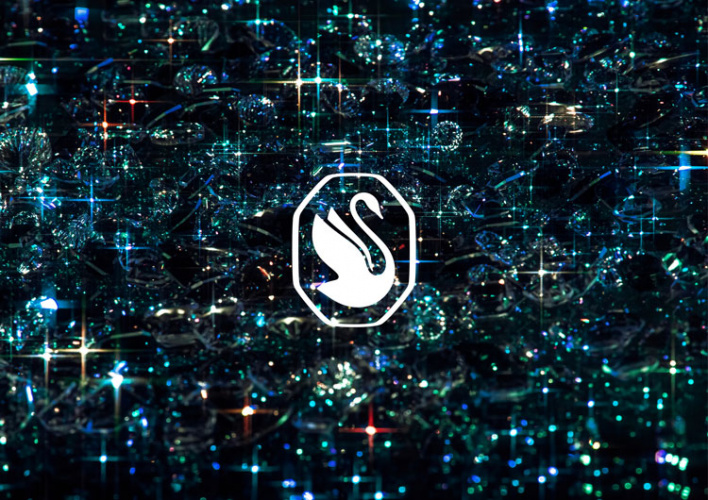 While the logo’s swan emblem has been retained, the bird now faces the opposite direction. With its pared-back look and elongated neck, it aims to show the “brand’s ever-forward momentum”, the company says.

“Symbolically, the swan represents the beauty of nature and eternal love, a sentiment mirrored by Swarovski’s love of crystal,” the brand says. “In adapting while staying true to its iconic emblem, Swarovski reinforces its pride for heritage as well as its vision for the future.”

The swan is surrounded by a “candylike octagon wrapping”, which is a nod to a faceted crystal and has connotations of rebirth, Swarovski says. According to the brand, the octagon also represents a sense of infinity and transition.

The logo change be accompanied by updates to the wider visual identity and an upcoming brand campaign, according to the company. 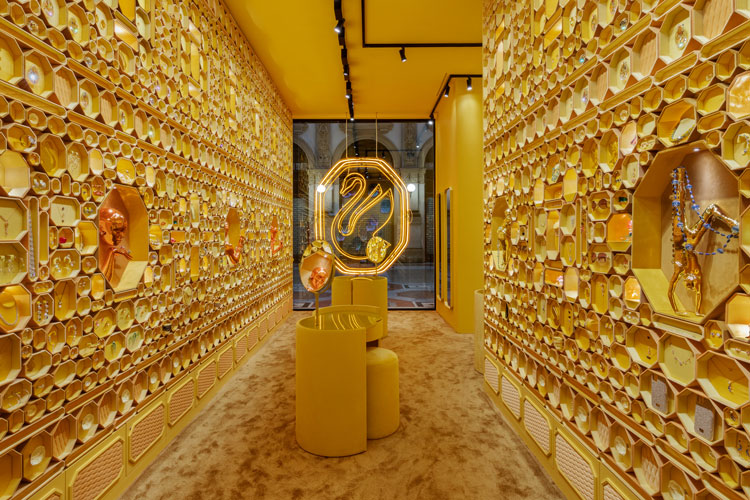 The new work is accompanied by 28 ‘Instant Wonder stores’ which will open in “key global markets”, Swarovski adds. The first to open is at the Galleria shopping mall in Milan, Italy while new locations include Paris and New York.

The company says that this is a “sensorial retail space” where guests will be welcomed to browse a collection of the crystals, metallic sculptures and the materials Swarovski is exploring. People will also be able to buy products in-store. 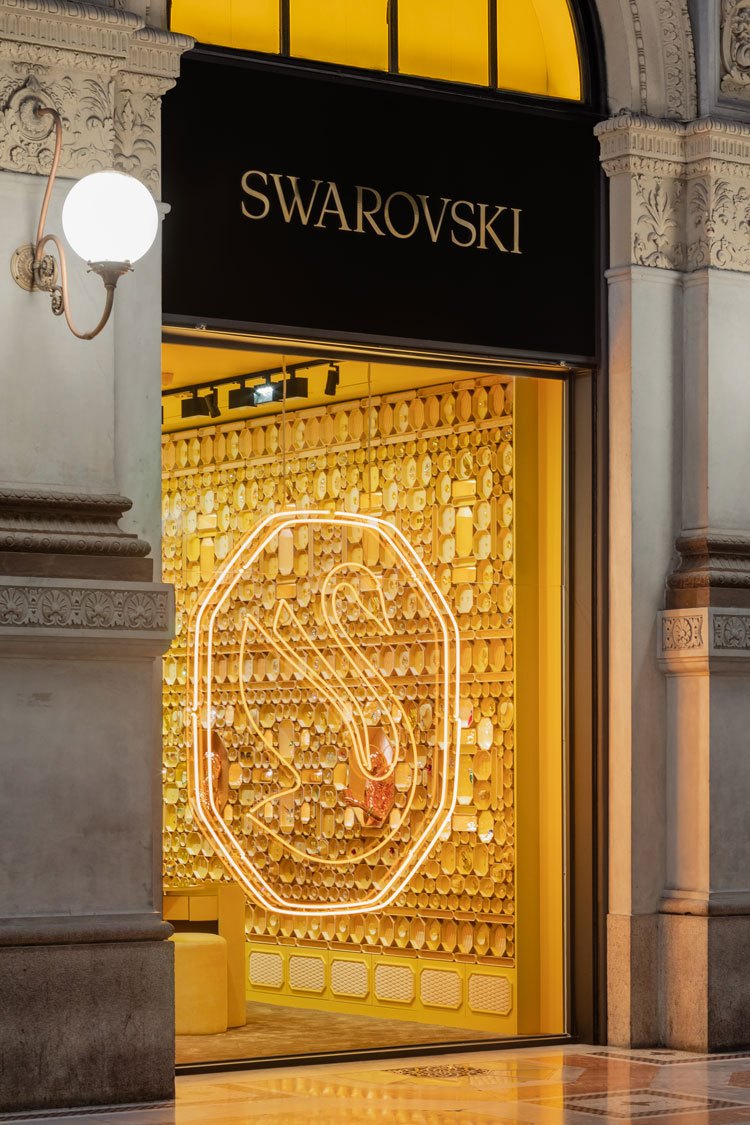 The “candy-like dreamscape” will also showcase lifestyle pieces such as jewellery, watches, figurines and accessories, Swarovski says. These will be furnished against the backdrop of the new octagonal logo, which can be seen recreated in neon at the Milan space.

The stores have been designed in collaboration with Paris-based events company Villa Eugenie, which works with luxury fashion brands. The UK Instant Wonder shop is yet to be unveiled.

“Everyone is starving for optimism, energy and light” 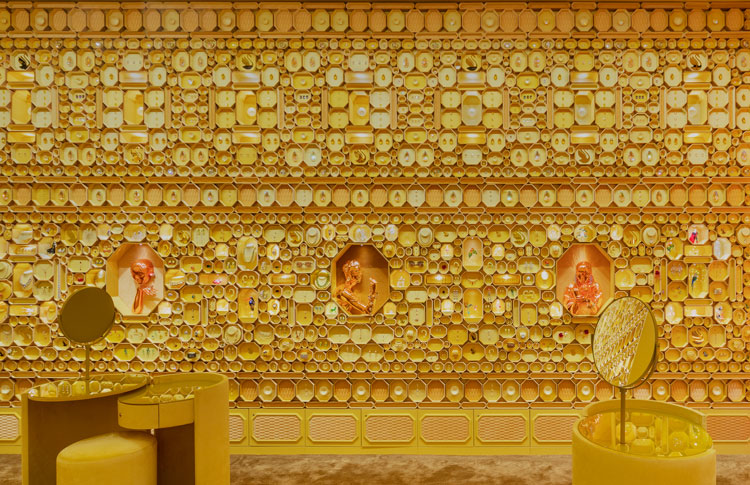 “Swarovski always planned to push ecommerce and to create a store concept that’s more an experience than a shop goes in line with this strategy,” Swarovski’s in-house creative team tells Design Week.

“Engelbert wanted to create a store where people get a feeling of wonder and magic, that brings joy and surprises through its design,” the team says. It adds that this is especially true now when “everyone is starving for optimism, energy and light.” 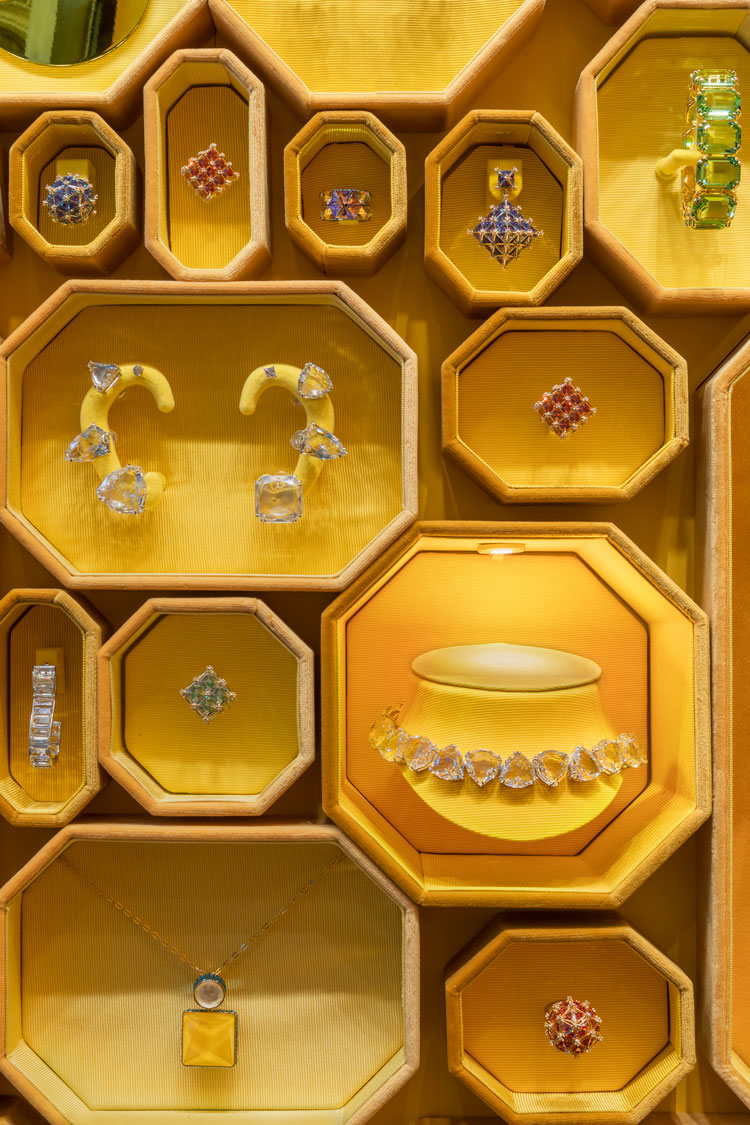 The display cases are inspired by the new logo; octagon-shaped boxes form the “repeating motive of the wall” which seeks to create a “textual, standout display space”, according to the team. The “candy-coloured interiors” take inspiration from the prismatic colours created by illuminated crystals, it adds.

A variety of materials are in use, such as a velvet and silk on boxes, which are used on panels, furniture and the crystals themselves. Most of the stores will have carpets that match the furniture and walls to “increase the luxury feel”, it says. 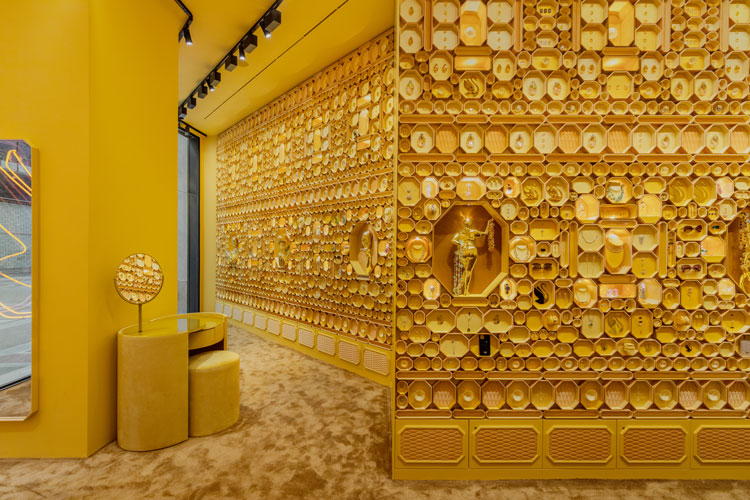 Busts have also been especially designed for the stores, which will be adorned with jewellery from the new collection. These have been coloured with a “special chroming technique that provides a distinctive effect”, the team says.

Covid has not changed any of the new designs but “only accelerated the transformation,” it adds. Some of the new retail spaces will have digital elements such as screens and LED light walls.

Roll-out of the new spaces will be accompanied by live and digital events, which include virtual tours.