Coronavirus, and the infectious disease it creates COVID19, have clear human impacts. The number of cases is well over 100,000 worldwide, and the total number of deaths has surpassed 4,000 throughout the world. In the UK, 10 people have died from the illness.

But its commercial consequences are less immediately knowable. The disease originated from the Chinese city of Wuhan. China is a major manufacturer for companies; Apple, for example, has 12 factories in the country. At the press preview for this year’s Salone del Mobile (now postponed until June), lighting company Louis Poulson expressed concern about its supplies as all its LED light bulbs are made in China. The danger of putting all — or even most — of your eggs in one basket, is if that basket becomes a hub for a pandemic.

“The economic implications could be severe,” according to Nick Weetman. “What I would say about coronavirus is that it’s not something we’ve seen before.”

Weetman is a director at Davies & Robson, a supply chain logistics consultancy based in Northampton. Its clients range in size and include Zodiac Aerospace, which creates aircraft interiors and Moduleo who manufacture vinyl flooring.

As opposed to more “localised” incidents such as Japan’s magnitude 9 earthquake in 2011, coronavirus has more “global” implications, Weetman says. “It started in one part of the world, but every part of the world looks like it will be subjected to it,” he adds.

“The virus itself is the least of our problems, it will come and go quite quickly,” Weetman says. “It will be like a tsunami hitting a beach — there will be a fair bit of damage caused, and only the strong companies will be left standing up after it.”

Among the prominent issues is a shortage of supplies, warehouse storage systems that are now at risks as well as a number of logistical issues, such as transportation of goods. However, as the pandemic is ongoing, it is difficult to know exactly how it will affect these complex networks.

“The old paradigm will kick in”

Neither is Weetman sure what planning can be done to mitigate these unknowns, though Davies & Robson advises clients about risk assessment when setting up supply chains. For the ongoing pandemic, a big problem for the manufacturing industry is that it’s difficult for its employees to work remotely. Factory works need to be in factories; drivers need to be driving.

One of Weetman’s client is installing a separate entrance to a factory, effectively halving the site, so that if one worker is infected with the disease on one half, it doesn’t cause the entire factory to shut. This solution might appear short-term, but Weetman predicts that this pandemic will not have lasting consequences for how supply chains work in the future. “The problem is that people’s memories are very short,” he says. Once things have “blown over” he says that the “old paradigm will kick in, and cost will be king” once more. “People repeat the same mistakes,” Weetman adds.

What if they didn’t have to repeat the same mistakes? SupplyCompass, a UK-based start-up, is attempting to rethink brands’ relationships with manufacturers. The company links brands with ethical and sustainable manufacturers mostly in India, with an emphasis on transparency. Greater transparency makes it easier for companies to track their manufacturing process — which also means it would be easier to identify problems and navigate disruption. Last month, it unveiled its design platform which aims to guide brands from the beginning to end of a supply chain.

To approve a factory, SupplyCompass researches a site in accordance with a range of “top industry supply chain certifications”, which “represent different parts of ethical, sustainable, and transparent fashion and homeware manufacturing” according to its certification guide. The process includes on-site visits, and continues after a factory has been approved to make sure those standards are maintained.

Davidson and her co-founder Gus Bartholomew, had lived in India for two years, building relationships with manufacturers before they set up SupplyCompass. The business started with a focus on sourcing organic cotton, and has since expanded its reach, as clients demand other materials. In Portugal, there is a sock factory, as well as manufacturers for terracotta and ceramic. In China, there is a factory for recycled polyester outerwear. This expansion is also about working out different countries’ strengths; India, Davidson says, is not so strong at sourcing some of those materials.

“We don’t want to be a cheap date,” SupplyCompass’s co-founder Flora Davidson says. “We want to set up longer relationship and plan for success.”

This ambition predates coronavirus. What brands want — and wanted before the virus outbreak — according to Davidson, is greater transparency and traceability. “People are asking more questions about where materials come from,” she says.

Companies have also been asking more about what technology is available at various points of the supply chain. 3D sampling software, she says, is one of these technologies as it can help with design development and make the sampling process more seamless. As with a lot of supply chain-related issues, it’s not an overnight fix. At the moment, SupplyCompass does not have the technology to trace every step — though Davidson would like that, imagining virtual reality might even be involved — but it’s about trusting in the relationship. 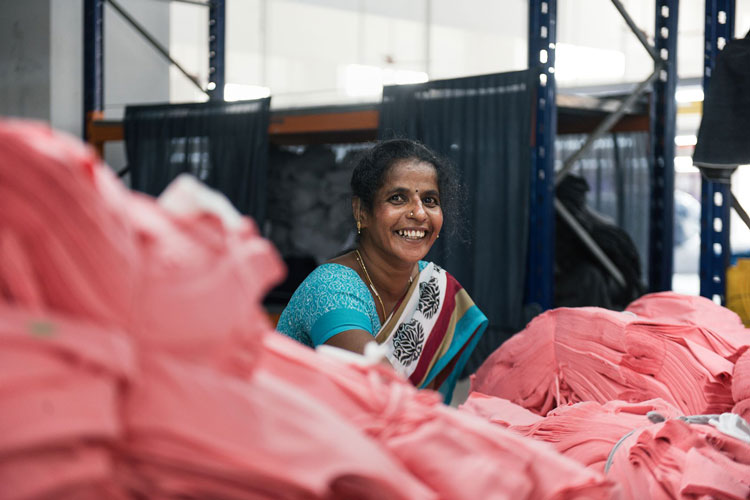 SupplyCompass’ target client audience is fashion SMEs, from three employees to 50 (though it works with companies both smaller and bigger than this). It also doesn’t work exclusively with fashion brands; it helps indoor plant start-up Patch to source flowerpots and also sustainable packaging. While that latter focus ties in with the service’s ethical aims, it is also newly relevant in a post-coronavirus world as the disease has created a shortage in packaging materials. The model could potentially work with any number of design companies and SupplyCompass works in furniture production.

While it may be easier for SMEs to develop an “agile” supply chain, how easy would it be to implement for bigger companies?

Davidson says that large fashion businesses have approached the company. While some businesses — such as Zara — have a “sophisticated” supply chain system of their own, working with bigger businesses might not be so difficult. These brands are often divided into silos – menswear in one country might not be hooked up with menswear in another country, so there’s a possibility to work with brands at different tiers. In the future SupplyCompass would like to remove itself from the narrative completely, by expanding its platform so that brands could use it independently.

When it comes to coronavirus though, the best time to prepare was probably months ago. When it comes to fashion specifically, production is often usually in the last month, so “it’s really about identifying that there may be something in your supply chain that might be impacted” in advance. SupplyCompass has seen brands bringing specific styles over to them to slot into different supply chains. “We don’t want them to break their relationships with those factories if they’ve been working with them, but if they need to make something in Portugal for this season, and it might be more expensive, at least we can bring it to market.”

Ultimately, Davidson says, the outbreak has brought home how important it is for brands to build “robust, diverse and agile supply chains”.

Cultural appropriation: can designers ever responsibly “borrow” from other cultures?