A diabetes-monitoring earring and air purifier inspired by the London Underground are among the shortlisted projects at this year’s Global Grad Show.

Hosted by Dubai Art Group, the year-round showcase brings together 100 new graduate projects which aim to have social impact in sectors such as personal health and the environment.

270 universities from around the world submitted a total of 1,600 projects for the second year of the competition. 2020 also marks a record 24 shortlisted projects from UK and Irish universities.

Two of the shortlisted projects will secure seed funding to help bring them to market. The line-up is now live and can be viewed as part of a virtual event on the Global Grad Show website. 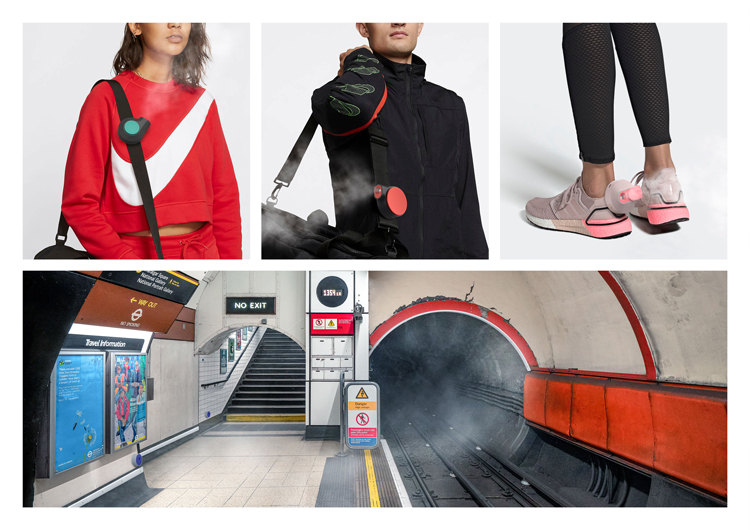 Concerns about the environment loom large for this year’s line-up, from reducing the effects of air pollution to designing more sustainable materials.

Kevin Chiam from the Royal College of Art (RCA) has submitted a wearable air purification device. Airtomo is inspired by the high levels of pollution in urban public transportation settings, such as the London Underground. The product can release atomised water to clean 167 litres of air every minute, according to Chiam.

The water vapour binds particles to form larger aggregates which fall to the ground and remove them from the air. It is aimed to be worn – you can attach it to your shoes or backpack strap. It can also be integrated into the built environment by being placed on a wall, for example.

A crop of material innovation also aims to prompt more sustainable production cycles. The Ventnor Brickworks from Imperial College produce construction bricks made of kelp while RCA’s Shiyi Liang has developed a chlorophyll film that could be used in small hold farming methods.

A joint project from RCA and Imperial College targets the effects of tyre wear, which is the second-largest microplastic pollutant in Europe. The Tyre Collection aims to reduce these emissions by using electrostatic technology to capture tyre waste and store them in a removable storage unit for reuse. The project has already been named the winner of James Dyson Award 2020.

The international aspect of the competition means that projects often incorporate local solutions and target area-specific challenges. For example, Li Ping from the National University of Singapore has developed a packaging product that uses durian fruit (native to Borneo and Sumatra) as an alternative to materials like Styrofoam.

Health and wellbeing is another popular focus. Milli by Loughborough University’s Zachary Rigby hopes to reassure people who are deaf or hard of hearing when they sleep. Many people with these conditions live in places that are not equipped to wake them in the event of an emergency, according to the designer.

“This can be life-threatening,” Rigby says. Milli comprises a “smart bedside clock” which can be connected to an alarm and a vibrating under-pillow device. Through haptic technology, the product can wake deaf people not only during an emergency but also as part of a daily routine.

The Sense glucose earring from the University of Huddersfield’s Tyra Kozlow is a non-invasive blood glucose monitor which aims to help people manage type 1 diabetes. It connects with an app to alert people with diabetes about their current levels of blood sugar and sends them notifications.

Wearable technology and health is also the focus for Callum Leitch from the University of Glasgow with his project Monitum. When a seizure is detected through a sensor, the device vibrates behind the ear to alert the person to get themselves to safety.

Our growing reliance on smart phones, and how it affects us mentally, has inspired two international projects. From South Korea’s Samsung Art and Design Institute comes the Pause Pillow. The interactive pillow – designed by Wonmo Yoo and Hyun Yeol Shin – contains a pressure sensor which limits a phone’s network when people rest their heads on it.

Facel from the Higher School of Economics in Russia is a headset that aims to reduce stress and improve efficiency by monitoring parameters such as eye fatigue and concentration levels.

This year, there was also a Covid initiative as part of the competition call-out. Four projects – including a device to make bleach at home and an app for Covid volunteering – are currently under consideration.

One has already advanced pilot stage. Imperial College’s Foresight is an AI system which processes clinical information about patients in intensive care units. Led by Sam Tukra, it was designed to be easily adapted to medical settings and use data that is usually commonly collected.

A temperature-based reflective paint and a portable cooking solution

The winning projects from last year are a reflective paint from SpectrumLab which changes colour based on temperature in the hopes of improving buildings’ energy efficiency and portable stove Safe Cooking which aims to provide an affordable solution for people whose current cooking methods are unsafe.