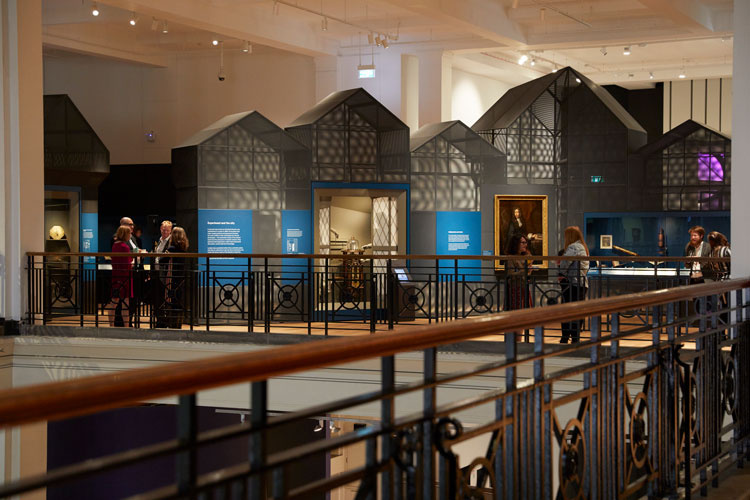 Science City 1550-1880 follows the development of science in London throughout three centuries, as it went from a less respected subject to a widespread and formalised practice at the end of the 18th century.

The exhibition, which has been in development since 2014, brings together objects on loan from King’s College London, the Royal Society and from the Science Museum’s own archives. Many have not been on display for decades.

The first section explores “practical mathematics” and looks at inventions for surveying and architecture like protractors as well as textbooks which had been published in English for the first time, from Latin.

A second section, themed around the Royal Society, shows the development of technology, such as ornate telescopes to chart the sky’s movement. The King George III section displays equipment from the royal collection, including a lavish silver microscope which shows the growing precision — as well as fashionable nature — of science.

“What struck us about the objects is that they were made in London, and many of them used in London,” Alex Rose, the curator, says. “There’s a story to tell about why London was such a site of scientific enquiry.”

The exhibition time frame follows a period of development from a bustling trading city to one of world-leading sciences. “It shows the birth of a scientific culture that we now take for granted,” Rose says. “The exhibition explores how, over 250 years, science shaped London and London shaped science.” 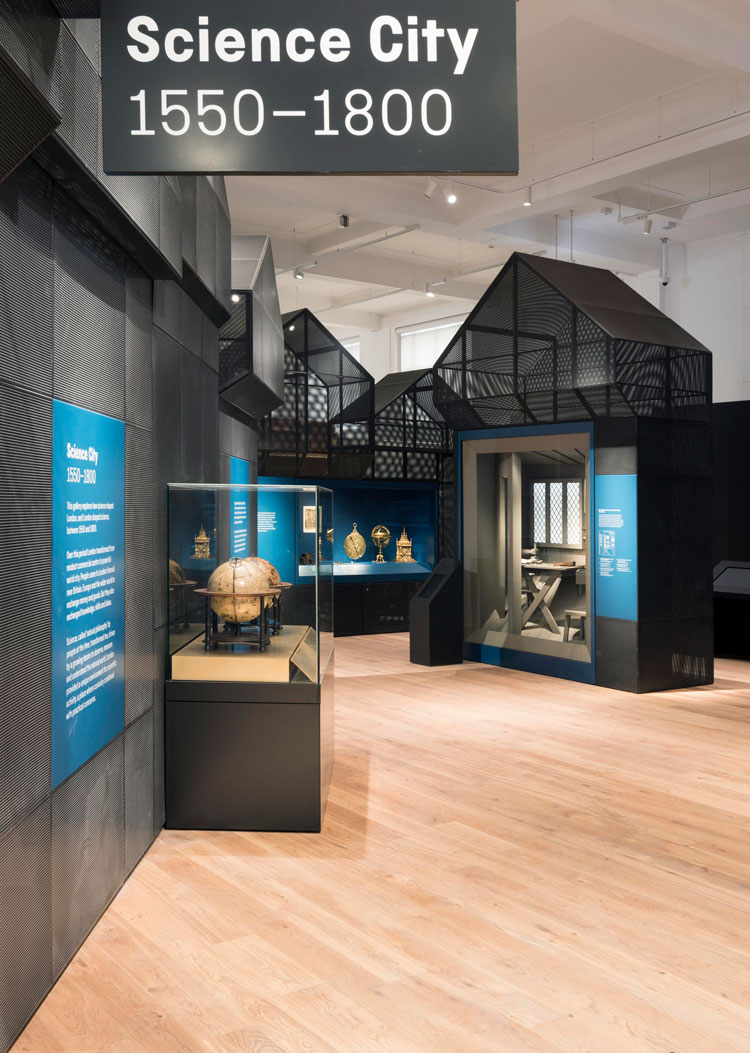 The new gallery is over 650 square metres and the exhibition has been designed by Gitta Gschwendtner. Seeking to avoid “flat wallpapers of prints” and instead create a more “evocative” space, she has designed displays based on the “archetypes of London houses form the beginning of the period to its end”.

The structures are made from black, punched steel panels, and the material’s gauze-like nature means that their appearance blurs and becomes “ghostly” as visitors move through the exhibition. Gschwendtner hopes that the translucent displays “make the space feel more alive”.

“It looks effortless,” she says “but it is precisely engineered.”

At the start of the exhibition, the displays evoke Tudor architecture with “grid-like structures” and overhanging facades as well as swinging signposts. As the exhibition progresses, the colour of the displays lightens to shades of grey to represent how “the city opened up,” Gschwendtner says. The end feels “completely different”, representing the move into Regency architecture.

The “abstract cityscape” aims to evoke “the city in a three-dimensional and subtle” way that Gschwendtner hopes will last the permanent exhibition’s 25 year-period.

“Everyone who comes here is from London, or coming to London, and this exhibition completely positions you within the city,” Gschwendtner says. 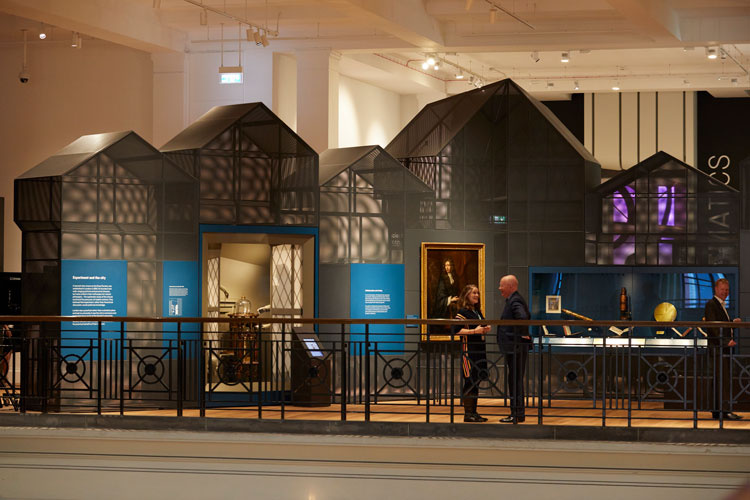 The showcases and graphics are all teal coloured, in an attempt to make the objects which are often wooden or brass “stand out” as well as provide a continuous thread throughout.

Descriptions are kept “simple and minimal” so that content is “clear and accessible” to every type of visitors. Diagrammatic illustrations, used to explain the scientific concepts behind the instruments, are also kept simple. Gschwendtner hopes that this creates a “clean narrative” throughout.

“Visitors can read them like a book,” she adds. 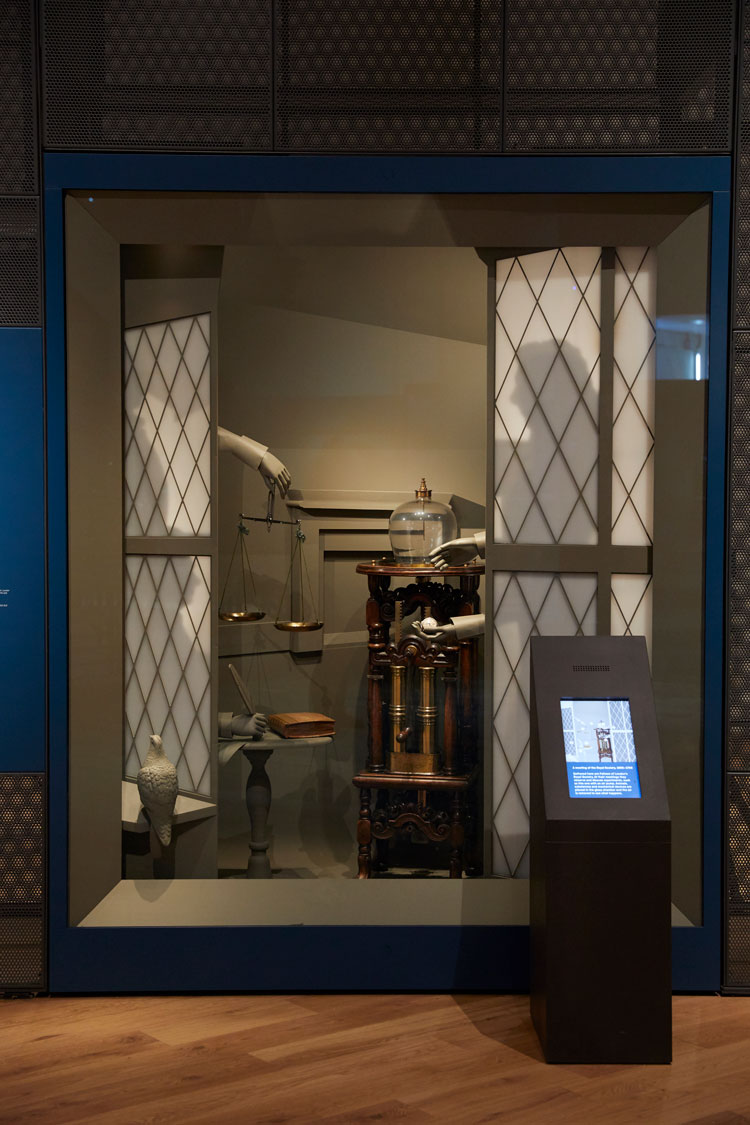 Using set design to evoke a “moment in time”

Each section is signposted by a “gate keeper scene” which sets the tone for the relevant section. These “contemporary dioramas” show mannequins’ hands using some of the objects to give visitors context about the period. The first depicts a 16th century workshop. In the second, Royal Society members test out new instruments.

These “minimal” displays, created by set designer Leila Latchin, are all grey. Again, this is to highlight the objects and provide a uniformity throughout the exhibition. They rely on forced perspective, which provides depth more easily, crucial when trying to fit an entire workshop scene in the constraints of a small display space.

“Each space depicts a certain moment in time,” Latchin says. “It involves the architecture of the period and shows how people might have used the objects.”

The scenes are paired with an interactive display, which users can tap to read more about the objects on display. “We wanted to keep the design pared back and didn’t want to explain too much,” Latchin adds. “This tool lets us clarify anything people might be confused about.” 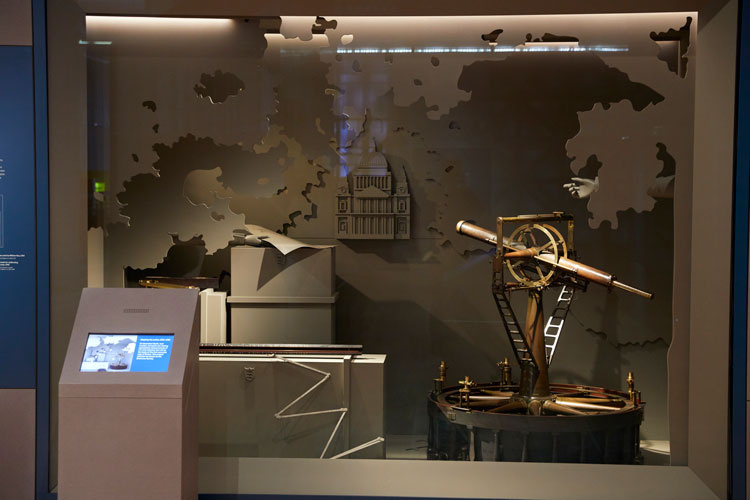 A return to the museum’s “original architecture”

The Linbury Gallery — the room in which the exhibition is housed — has been “stripped back”; the ceiling beams have been brought back, the barrier between the gallery and the balcony has been replaced by one that more closely mirrors the building’s original.
“There is no longer any of the strange 90s feel,” Gschwendtner says. “It was about bringing the museum back to its original architecture.”