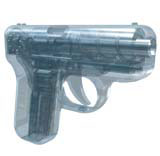 While rapid prototyping is still science fiction, it could lead to a new era in manufacturing, with consumers designing and customising products themselves. John Stones looks at a recent project at the Royal College of Art

Imagine, rather than going to a shop and choosing a toaster or a chair, you could surf the Web for a design that you like on a website, such as Amazon, and then modify and customise this blueprint to suit your personal taste, before pressing a button to ‘manufacture’ it at home or at a booth, similar to the ones now churning out passport photos.

Advances in rapid prototyping technology are making scenarios like this increasingly feasible. Even more futuristic is the RepRap project, led by Adrian Bowyer at Bath University, investigating the possibility of a rapid prototyping machine that would replicate itself. Apart from the intriguing theoretical panorama such a machine would open out (such as the Darwinistic evolution of machines), it would also allow for the cost of rapid prototyping machines to be brought down to the level where the technology could be viable in a domestic environment – in effect, a 3D printer to sit alongside the ubiquitous 2D inkjets.

But, for the time being, the price of rapid prototyping technology keeps it out of immediate reach, and designers are, as yet, far from being an endangered species. Earlier this year, students on Ron Arad’s Design Products course at the Royal College of Art took up the offer of 3Dsystems to have access to the full might of ‘solid imaging’, or rapid prototyping technology. The project enabled the students to have a glimpse of a future where the boundaries between prototyping and manufacturing could be blurred, and a ‘rapid manufacture’ key was added to the students’ keyboards as a humorous reminder of the future impact of the technology. Among the products produced by the students within the set two weeks were a virtual bonsai, an expanding basket, a cocoon chair, a ball bearing-eating figurine and a calendar, with cones you snap off to mark the passing of days.