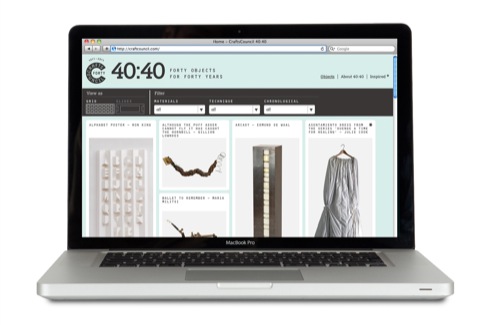 The website showcases 40 objects from the organisation’s collection spanning its 40 years of existence.

The consultancy styled the site with a minimal contemporary take on Victorian ephemera. It combined a single colour from the Crafts Council palette with either black or white type ‘to create a pared-back simplicity that makes the object the hero,’ Ico Design says.

The aim of the project was also to create a visual filtering system so that the objects can be explored in a dynamic way, the consultancy says.

Each piece has a lot of information associated with it and the format is designed to treat each one as a separate story. Ico Design used the idea of exhibiting a record card for each object containing information on the piece, maker and a personal commentary from a guest maker, curator or critic.

The Crafts Council appointed Ico Design for the online exhibition project in October this year through a pitching process. It took the consultancy six weeks to complete the task, with the final week used for testing only.

The main challenge Ico Design faced was creating a multiple device compatible with other viewing platforms, such as mobile phones. To achieve this aim, the agency used the jQuery plugin Isotope, which ‘enabled us to have a dynamic visual filtering across all platforms,’ Lloyd says.