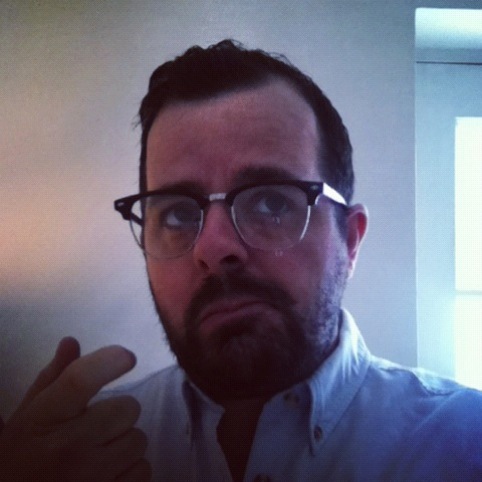 ‘Well there’s usually already a good idea and you guys usually come along and mix in other ideas. They just muddy the water.’ continued my above-the-line assassin . ‘There’s a process, and you chaps just fuck it up.’ He was stirring his stale coffee. ‘Ooooooooooo-kay’ I said as I stirred my tea and returned to my seat to continue adding in even more ideas.

This conversation actually took place, with one of those grey-haired, slovenly dressed, ponytail-sporting ‘traditional/above-the-line’ advertising creatives.

This ‘them and us’ mentality needs to stop, sooner rather than later. Those of us working in the ‘digital/interactive/online/newmedia/multimedia/internet/CDRom’ industry have all sat in meetings where we’ve been drafted in to briefs that have been created once the ATL concept has usually been shot, edited and ready to go on TV. Oh and you’ve four weeks to get it all designed, built and live, cool? Cool.

Conversely the same experience is true for the ATL teams who spend weeks, months developing that tv script and ATL campaign only to have these apparent ‘kids’ coming in and fucking it all up with their motivated passion for technology and all things sharable.

The problem is that the while the traditional teams have their rightful place, they are also clinging to their antiquated processes and values like the big record labels did in a vain attempt to ignore the digital era. We all know how well that worked out (<cough> iTunes </cough>).

There are now plenty of digital agencies, some of which are purely production focused; facilitating the needs of those ATL agencies who have decided not to hire in-house teams (or have fired the ones they did hire in 2004).

This in itself is a modern quandary for advertising agencies; do you hire in the talent? White-label third parties? Strike up partnerships (and actively promote them)? All these options have advantages and disadvantages for all concerned.

Having been on the production side many times I believe things are getting better, but so much could still be done to improve the ‘process’ for all relationships concerned; agencies, partners and more importantly, clients. Lots of agencies have opted for hiring key people; (more digital/interactive) ECD/CDs, creative technologists, digital producers, etc; all of whom are tasked with working with third party or production partners.

What about those agencies still lagging? The more traditional agencies who set many of the former benchmarks for ATL advertising who are now floating like driftwood?

My advice, for what it is worth is a seemingly and so-bleeding-obvious it almost embarrasses me to suggest it. Are you ready? Drum roll. Bring in your digital partners earlier! By early I mean when the brief lands. Don’t tell me it doesn’t include digital.

This is not because digital is more important that ATL. But in today’s market both have equal and deserved merit. Given that so much media spend these days is being poured in to digital (which unlike ATL is precisely quantifiable) it makes sense for the traditional and digital teams (in-house or third-party partners) to work together from the get-go. That way there are no surprises. No excuse for ATL to feel their idea is being diluted into a Facebook app (god forbid), or digital to compromise their passion and ambition because of time constraints.

You think this will be too expensive? Yes, it will be more expensive, but cheaper in the long-run when you avoid over-running the digital delivery and cancelling media, or rolling out phased (online) campaigns because there wasn’t enough time to schedule and produce the work properly in the first place.

All I’m saying is work together. More. Closer. Earlier. It’s not fucking brain surgery, it’s tradigital. I hate myself for writing that word.

Steve Price is founder and creative director at Plan B Studio.