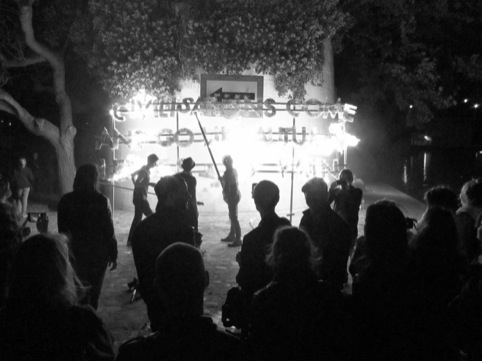 ‘They’ve taken the word “fuck” out at the printers’, he says ‘It’s just mental. That’s a really core part of my work – working with text on the street is the stuff closest to my heart.’

To put this into context, this must, indeed, be a truly exasperating, baffling discovery. Montgomery’s’ works  – huge textual pieces that adorn the streets like poetic, ad-aping pieces of graffiti – are entirely based on their wording. Each letter is crucial- and to remove something as fundamental as ‘fuck’ clearly doesn’t make any sense.

Montgomery is currently gearing up for his exhibition It Turned Out This Way Cos You Dreamed It This Way, which opens at east London gallery KK Outlet this week.

The show’s centrepiece however, is housed outside the walls of the gallery – it’s plastered on three huge billboards on Old Street, near KK Outlet, and slap bang in the middle of where just about everybody passing through the Hoxton area can see it.

This isn’t the first time the artist has shown his work here – a recent piece saw the same billboard, on the wall under a bridge where Old street meets Kingsland road and Shoreditch high-street, adorned with a poem featuring the bittersweet words ‘some of the things you love will always be behind you.’

Referencing the Situationist tradition, the pieces capture the viewer when they least expect it – usually en route somewhere else, or in the area for a purpose totally unrelated to looking at art.

‘[The works] are intentionally, specifically non-design design’, says Montgomery. ‘I only use one font – my font is an adapted version of Ventura – but it’s always the same version. They’re always anonymous, so you can’t really write them off as graffiti. It’s in the contemporary art tradition but you don’t have that knowledge.’

It’s no accident the works will be almost directly opposite the Shoreditch Courthouse, which the Occupy London movement – which Montgomery is a strong supporter of – has been occupying until this week.’

As well as these pieces on the street, Montgomery is also adorning the side of the gallery itself with a light work, a poem featuring the words ‘the city is wilder than you think and kinder than you think.’ He says, ‘The city has a dual identity as a wild place and a kind place.’

Montgomery is hugely influenced by concrete poems, as well as more traditional works by poets such as Ted Hughes, Sylvia Plath and Philip Larkin. He cites one of his biggest influences as 1908 poem Zone by Apollinaire – and his prescient prediction that ‘what we will be left with for poetry this century in billboards’.

The work formed part of the Recycled Sunlight Series of ecologically solar powered poems in light.

There will also be a number of Montgomery’s watercolours, painstakingly delineating the letterforms of the billboards.  ‘I very consciously made in watercolour like those very uncool 19th century watercolours’, says Montgomery. I love that tradition of old manuscripts and water colour pictures.’

It Turned Out This Way Cos You Dreamed It This Way runs from 3 – 25 February at KK Outlet, 42 Hoxton Square, London N1