The Wolf Man, a forthcoming release from publisher Self Made Hero, takes its title from Freud’s 1918 paper – also known as From the History of an Infantile Neurosis. It became one of the touchstones of modern psychoanalytical texts – and one of a series of clinical case histories that informed Freud’s theories on psychosexual development. 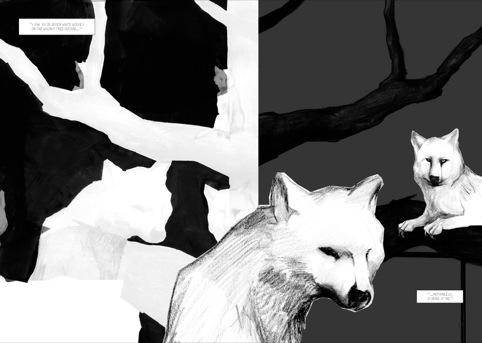 The story is set in Vienna in 1910, and sees our protagonist, a  Russian aristocrat named Sergei Pankejeff, seeking Freud’s help following a disturbing recurrent dream. Pankejeff’s childhood reveries star a pack of white wolves, perched menacingly on a tree outside his bedroom window – hence his nickname, The Wolf Man.

During our lupine hero’s lengthy period of analysis by Freud, the outside world’s troubles mirrored his inner tumult – with monumental events such as his early years under Tsarist privilege, the First World War, the Russian Revolution, The Nazi regime and the Cold War. Which is enough to make anyone neurotic.

Harasymowicz says, ‘The greatest challenge in depicting Freud’s story visually was to create a narrative of reality, dream memory and fact, which looks like it is just about to fall apart, yet, somehow, doesn’t and is quite seductive – like the Wolf Man in his state of mind.

‘I drew the graphic scenes exactly as they might have happened (or been witnessed). for me, it was about looking at those moments form the point of view of someone who does not necessarily remember them clearly, and who has to switch between a child’s memory of an ambiguous “visual element” and an adult’s understanding of it.’

The Wolf Man out now, published by Self Made Hero priced £14.99