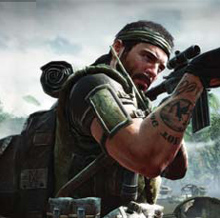 The gaming industry is no longer about ’Billy no-mates in his bedroom’ (though there may still be some of them out there). A far more experiential, interactive and addictive market has come alive.

In terms of increased popularity, you only have to look at the figures. The UK games market is worth £3bn, with 83 per cent of five- to 16-year-olds owning a games console. So what has changed?

Call of Duty, created by Ben Chichoski, is one of the most prevalent games series of all time. As of November 2009, total sales for the entire Call of Duty series surpassed 55 million units worldwide, taking $3bn (£1.9bn) in retails sales in the process. The reason? Third-person shooter – a new genre of action 3D games. It is more realistic and more distinguishable, as the graphical perspective is rendered from a fixed distance behind the player’s avatar.

The point is that games now have the same production values as films: many of them look, sound and feel like movies. The gaming industry is worth £60bn, which compares to £70bn for the film industry.

The obsession doesn’t end there. Games can now be downloaded on to mobile phones, with Apple fuelling the revolution. Angry Birds, created by Finland-based Rovio Mobile, is one of the most successful apps ever sold. Since December 2009, 12 million copies of the game have been purchased from Apple’s App Store. It has been praised for its successful combination of addictive game play, comical style and low price. With more than 50 billion downloads across all platforms, it has been cited as ’one of the great runaway hits of 2010’.

The gaming industry is hot property – and one in which design takes an important lead.