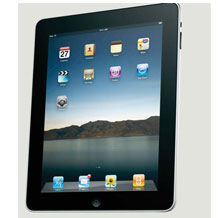 There’s no keeping Apple from the Hot 50 listing – or, indeed, any design ranking – however hard you try. And it is ground-breaking innovation
rather than just the quality and consistency of products created by Jonathan Ive and the in-house team at Apple that keeps it up there.

Just as the iPhone offered us amazing new technology and brought a new physical language – the stroke – in the way we communicate via a touchscreen rather than a keyboard, so the iPad promises to revolutionise the way we access and read material online.

The iPad’s bigger screen makes it easier to use apps or access games originally designed for the iPhone, and it is prompting magazine and newspaper publishers to rise to the challenge of a new media format. And because it is being promoted as a lifestyle device rather than a business tool, the take-up is expected to be enormous as a family entertainment centre, especially when the second generation is released this spring.

Apple wasn’t the first to bring us a hand-held reader – Amazon’s portable e-book reader Kindle, for example, has been with us for some time. But the iPad has consumer-friendly touches to the design and technological capabilities for colour and imagery others have yet to achieve. It also exudes the Apple ’lifestyle’ promise.