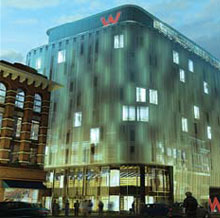 Global recession may have been a theme of last year, but the luxury market generally doesn’t seem to have been seriously dented. Certainly, top-end hotels have continued to thrive, judging by the number of new openings over the past few months – in the UK and abroad.

Few have been as design-friendly as W Hotels Worldwide though,which has stepped outside its North American heartland to launch hotels internationally, each with its own signature style. The group’s Vienna-born global brand leader Eva Ziegler has been charged with creating a strategy for launches of W Hotels and for developing the group’s Le Méridien brand.

Recent openings by the boutique hotel chain include the W Hotel in Barcelona and the Istanbul hotel. Next month though sees the opening of the UK flagship in London’s Leicester Square. Designed by architect Jestico & Whiles, which has previously worked on Malmaison and Anders hotels, the London W Hotel will feature a lighting installation by Jason Bruges Studio, among other features.