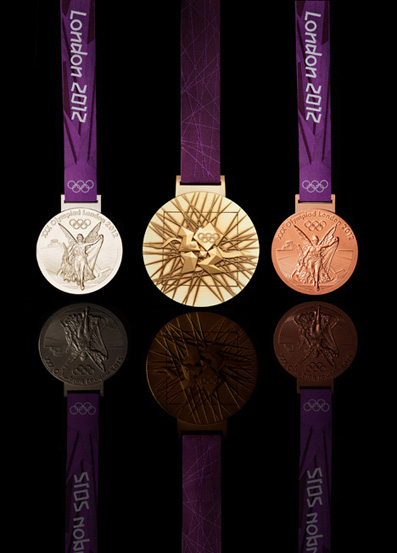 Artist David Watkins was commissioned to develop the designs by the London Organising Committee for the Olympic and Paralympic Games following a six-way tender process.

The front of the medal features Nike, the Greek goddess of victory, stepping out of the Parthenon to arrive in the host city. Locog says this features on all Olympic medal designs.

The design for the reverse of the medal features the Wolff Olins-designed Olympic logo set in a field of designs.

Locog says the dished background ‘suggests a bowl similar to the design of an amphitheatre’, while the raised logo is like ‘a tough crystalline growth’ or ‘an architectural expression’.

The reverse design also features a grid, which Locog says, ‘brings both a pulling together and a sense of outreach’ while the River Thames ‘is a symbol for London and also suggests a fluttering Baroque ribbon’ and a square ‘is the final balancing motif of the design’.

Watkins says, ‘It is exciting to think that the finest athletes in the world will be wearing my medal design next summer. It’s key symbols juxtapose, front and back, the goddess Nike for the spirit and tradition of the Games and the River Thames for the city of London.’

To develop the brief for the medals, Locog worked with Philip Attwood, the British Museum’s keeper of coins and medals, to look at the symbolic history of medals in Europe. Following this research, six artists were shortlisted and asked to develop designs that creative a narrative from the front to the back of the medal.

Watkins was selected by an independent judging panel chaired by Sir John Sorrell. Sorrell says, ‘The design is dynamic, full of energy and makes ingenious use of the 2012 symbol. It is a beautiful piece of craftsmanship with a crystalline, jewel-like quality.’

The medals are set to go into production later this year ahead of the Games next year.

The design and designer for the London 2012 Paralympic medals will be announced by Locog later this year.