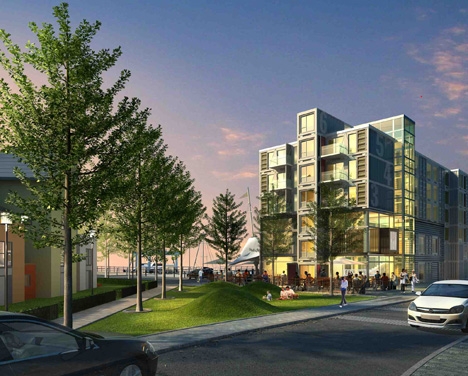 Hall and Woodhouse  acquired the land before receiving planning permission for a building between two and seven storeys in 2007.

Mackenzie Wheeler, which has worked with the brewer before on the design and refurbishment of its existing premises, was brought in to design a three-star hotel which will open in two phases.

The dockside site in Portishead, Somerset, means that containers can be delivered by boat and craned onto the site.

Phase one will see a 120-seat restaurant and bar on the ground and first floors but there has also been space given over to marina facilities, which will accommodate the needs of boat owners.

The structure of the containers will govern the interior look and feel, with ‘a simple and mechanical design language’, including branding applied to inside walls of containers. The hotel will also feature ‘large numbers’ and ‘signage which looks like it has come from the side  of a boat,’ according to Mackenzie Wheeler project architect Alexie Calvert-Ansari.

‘Wooden floors and aged furniture’ across a zonal layout will sit against exposed walls and soffits, says Calvert-Ansari, who adds, ‘We couldn’t really have stark metal furniture.’

Stage two will see guest rooms built as upper floors.  These will vary in size with some single cabins designed ‘to appeal to boat owners’ says Calvert-Ansari.

The interior which is still being finalised will move away from a ‘traditional three-star look,’ he adds. Work will begin on site in October.