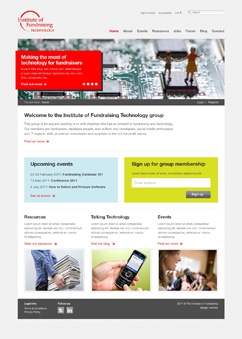 Remedy Creative was appointed in November 2010 and was selected because of its previous experience working for the charity sector, says Technology Group’s web officer James Higgott.

The consultancy was briefed to create a more dynamic and friendly website that would engage users throughout the year rather than just in the run-up to events, says Jonathan Wilcock, creative director at Remedy Creative.

The website, due to launch later in the year, will feature online resources for users, a blog and, in the second design phase, a forum.

One of the biggest challenges was to create a look and feel that tied in a clean palette with the ‘aggressive red’ of the Institute of Fundraising’s logo, says Wilcock.

He says, ‘Our aim was to design a professional, well sign-posted and visually appealing site for the group’s members which will help make it easier for them to find and share the latest industry information and make the most of their limited resources.’