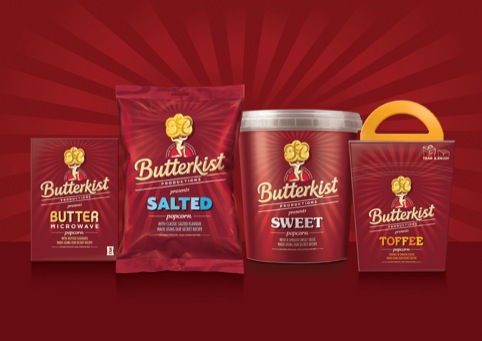 The consultancy was appointed by confectionary producer Tangerine, Butterkist’s parent company, in February this year.

The brand was initially created in America in 1914 and first arrived in UK cinemas in 1938, and the new branding looks to this age of cinema for visual cues.

As such, the new branding positions Butterkist as a ‘popcorn production company’, with packaging inspired by ‘the visual language of the classic film production logo’, according to BrandOpus.

Different typographic styles are used across the different flavour variants to give individual, ‘film-like’ personality to each product and to add differentiation, according to BrandOpus.

Avril Tooley, BrandOpus client services director, says, ‘We were challenged to create a distinctive and ownable look and feel for the brand, and we have succeeded in setting it apart from the competition, by building on Butterkist’s iconic heritage.’

The new branding launches from this week.