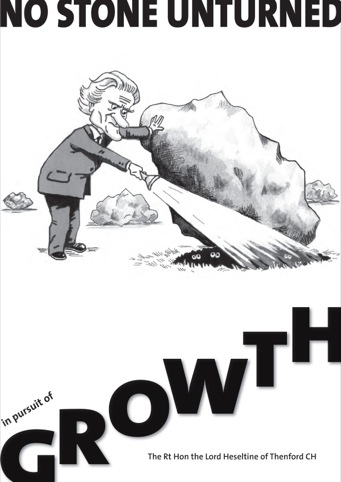 Among the suggestions in the No Stone Unturned in the Pursuit of Growth report are devolving more power to the regions by empowering local enterprise partnerships, creating an industrial strategy for the UK and a move to develop Government and business partnerships in individual sectors.

Heseltine has also called for particular sectors to have ‘lead’ trade associations.

He says there is currently ‘a proliferation of [trade] bodies of variable quality’ across the UK, and suggests that Government should nominate a key trade association as the focus of its engagement with a particular sector.

Each individual sector could also be represented by an ‘industry council’, the report says.

The review also calls for an overview of the Government procurement system, which would see a chief procurement officer appointed for each Government department, to oversee commissioning.

Government design and marketing projects are currently procured through a series of cross-departmental hubs.

There is also a call for the Government to commit to long-term and stable funding of science and research, to enable the UK to keep up with its international competitors.

Heseltine says, ‘The most competitive companies in the world do not just concentrate on selling in their current market – they are busy behind the scenes developing the next generation of products and services.

‘The iPad, iPhone and iPad have blown many of Apple’s competitors out of the water. It’s most successful rivals have stayed afloat by innovating further. But the US government plays a major role… In particular it has a systematic and comprehensive approach to driving innovation and supporting small business through its Small Business Innovation Research programme.’

He adds, ‘As a nation we need to do the same, to ensure UK business can build and take advantage of the technologies of tomorrow.’

Heseltine says investment in ‘traditional innovation’ like design is ‘relatively low’ in the UK.

Ellie Runcie, director of the Design Council’s Design Leadership Programme, was one of the contributors to the Heseltine Review.

A Design Council statement says, ‘We welcome the Heseltine Review’s focus on assessing the capacity of Government to deliver pro-growth policies and increase business competitiveness in the UK.

‘The Design Council submitted evidence to the review team and our comments focussed on the considerable potential for design in supporting both Government and business to bolster the UK’s competitiveness.

‘We argued that design capabilities should be a normal part of civil service training across the board and a targeted cross-government approach is needed to deliver design-led growth.

‘Design professions are also central to the UK’s world-leading creative industries and to supporting innovation in many other sectors including manufacturing and engineering and we identified the key role of design education in developing the next generation of design literate commissioners and consumers and in bringing the skills of creativity, enterprise and innovation to the private and public sectors.

‘We see considerable potential for a greater role for design in supporting both Government and business to bolster the UK’s competitiveness.

‘A recent independent evaluation of the Design Council’s Designing Demand programme demonstrates that design makes UK businesses more competitive: for every £1 invested in design, businesses can expect a return of over £5 in increased exports.

Chancellor George Osborne says, ‘I wanted Lord Heseltine to do what he does best: challenge received wisdom and give us ideas on how to bring Government and industry together. He has done exactly that.

‘This is a report bursting with ideas and we will study it very carefully.’

The Department for Business, Innovation and Skills says a full response to the Heseltine Review is due in early December.

You can read the Design Council’s evidence to the Heseltine Review here and the review in full here.