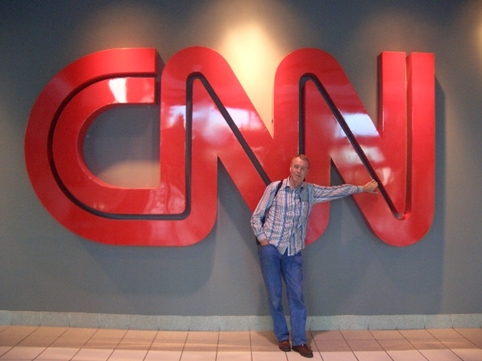 I always loved drawing from a very early age but I fell in love with design when I was about 15. My uncle was the MD of a factory that made air guns and he asked me to design a pack for air gun pellets. The brand name was Bulldog and I rather unimaginatively pictured a bulldog against a red white and blue background. I’ll never forget the thrill of seeing the finished printed pack. From then on I was hooked.

My first job was in Children’s Programmes at the BBC. I had expected to go into advertising but my external examiner, the late great FHK Henrion, gave me a letter of introduction to Bernard Lodge who was one of the new breed of designers that were transforming the look of television graphics. I was there for the next 18 years in what can be seen in retrospect as the golden age of television

My job is to give creative direction to Kemistry and to make sure the presentations we make cut the mustard. I usually do the presenting to client so I’ve honed those skills over the years and know the importance of believing in the idea one is trying to sell. Pinpointing the core idea that matches the brief is the hardest thing to do, but one develops an instinct for what is right when it turns up.

Without doubt the switch from analogue to digital. The speed of change was breathtaking. Many specialist design service companies didn’t survive. Photo type-setters, optical effects houses, art working studios, film labs as well as products such as Letraset, all suffered in the digital revolution. Along with that came a drop in budgets. Designers can now do things on their Macs that would have cost thousands of pounds to do the old analogue way.

Hard to pick but NRK, the national broadcaster of Norway, has to be up there. We’ve worked with them for over ten years. Going to Oslo feels a bit like going home to the BBC. There is still a lot of that early spirit there, the clients are delightful and the country is beautiful. Our current project creating a brand for London Live is also superb. Great projects always come about when you have great clients.

Back at the birth of the internet, we employed a rather cocky young marketing guy who brought a project to us he’s dreamed up called Life. It was a social networking project before the term was coined. We came within a day of signing a multi-million pound deal but unfortunately the two big name backers fell out over rights issues. Essentially he’d invented Facebook.

We initiated a TV series called The Turkey. It was a comic book brought to life with a mix of actors and animation. Ian Hislop, Fey Wheldon and George MacDonald Fraser wrote some great pilot scripts for us. Jeremy Isaacs at Channel 4 green-lit it and gave us development money. Unfortunately we overstepped ourselves and tried to sell the idea in Hollywood where we should have taken the first offer. We didn’t and the whole project spiraled down from there.

Kemistry Gallery has been a great success. I’d love to see that grow and open up in other cities. We’re currently in talks with Dubai and have also been approached about opening in NYC. I’d like to continue our mission to educate about the importance design plays in our lives.

Some people not only change one’s own life but change everybody’s life. One such person is Joy Whitby, my first boss when she was head of children’s programmes at the BBC. Joy invented both Playschool and Jackanory as well as bringing The Railway Children to our screens and in doing so influenced the lives of generations of children. I recently went to hear her talk at the BFI and was lost in admiration at here achievements. I must also mention Gary Kurtz, a great friend of ours who produced Star Wars 1 and 2, Need I say more.