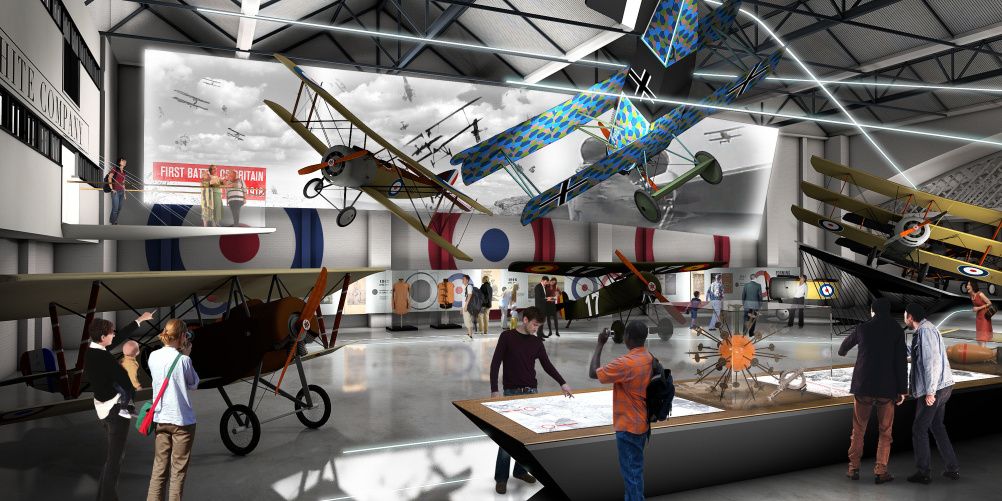 First World War in the Air, set to take place in the museum’s Grahame-White Complex, aims to teach visitors about the role of aviation in the war through real life narratives. It looks at the growth of the sector, which went from 250 men in the Royal Flying Corps in 1914, to 250,000 men and women in the Royal Air Force in 1918.

Alongside the aircraft collection, the exhibition will present personal artefacts, including letters, uniforms and medals.

Patrick Swindell, senior designer and project leader at Ralph Appelbaum Associates, says the design team wanted to include multiple elements to tell the full story. “We tried to use a whole range of interpretative techniques, from collections, to interactives and media,” Swindell says. “Previously the museum hadn’t made the most of their collections apart from their aircrafts – we wanted to integrate the smaller pieces with them.”

The exhibition looks at the formation of the Royal Air Force, and this story is separated visually into two aspects of air and ground, he says: “We used the full height of the space, by suspending aircrafts in the air, then mapping out a battlefield with media on the gallery floor.”

The design team also used old drawings of pilot training devices to create mechanical versions, which visitors can use. “You can sit in the cockpit of a First World War aeroplane and operate the controls,” Swindell says.

The project marks the start of the museum’s ten-year plan to improve visitor experience. The exhibition has multimedia installations, such as one that projects a moving, animated, “immersive” map, and another that tests the World War One knowledge of those who use it.

There is also a Nissen Hut, a wartime steel bomb shelter, where visitors can experience what it was like to train as a pilot in the early 19th century. “It’s a corrugated dome structure with accessible space for loads of different activities, such as live action role play,” Swindell says.

Angela Vinci, head of exhibitions and interpretation, and project manager for First World War in the Air, says: “RAA’s team has supported us in delivering our vision of a narrative-led and object-rich gallery that will engage with a more diverse audience.”